Stephan A is not happy! You hear that? Not happy at all! He's outraged, Goddamnit! "Look across the river, Max! What do you see?" 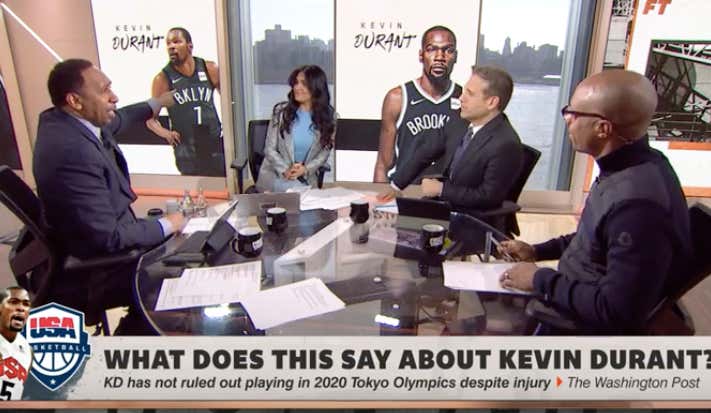 "An opportunity for me to drown myself so I can escape this conversation?"

Listen, I love Stephen A as much as the next guy, but every once in a while he overdoes it. Even by his standards, he overdoes it. He doesn't five a fuck whether or not KD plays in the Olympics before the NBA. You know why? Because he knows he's not going to. He knows he allowed his name to be in the group of finalists- that's *clap it*clap. It's not about him being entitled and doing whatever he wants. It's simply his name...on a list. He needed to get outraged to make the segment and that's what he did. That's why he is who he is you are who you're not. Although I will say, saying KD "doesn't care about what people think" is an outrageous claim. The man has fifteen burner accounts. Regardless, Stephen if you're reading this which I know you are, take it down a notch. You're scaring us, lady.