Andrew Walz calls himself a "proven business leader" and a "passionate advocate for students." Walz, a Republican from Rhode Island, is running for Congress with the tagline, "Let's make change in Washington together," or so his Twitter account claimed.

But there's just one problem: Walz does not exist. The candidate is the creation of a 17-year-old high school student from upstate New York.

And they say today's kids have no drive! This random ass teenager got bored from staying up until 4 am playing video games each night during Christmas Break and decided to create a candidate to become a congressman in Rhode Island. He said it took him about 20 minutes, but the big dumb adults of the internet not only verified him on Twitter, but Ballotpedia even made him a comprehensive page, profiling his viewpoints on important political topics.

Here is Ballotpedia as of yesterday at lunchtime, where they got a hot tip that Andrew Walz wasn't actually a "proven business leader", but he was actually taking "Intro To Business" as a junior in high school. He didn't actually want "to make change in Washington", but he wanted to make some spare change for gas money at his minimum wage summer job.

This is the new American Dream. Not everyone can run for Congress, but anyone can spend 20 minutes on the computer and make a fake profile to trick all of the morons on the internet. But are they actually morons? Like, this fake news thing is actually pretty scary. I mean, there had to be idiots out there thinking they were going to vote for this guy! And I don't think you can completely blame it on old people that love to read headlines on Facebook and make their opinion with a grand total of zero investigative work on their own, but I will say, they are so dumb.

Here's what this big dumb idiot shared on my Facebook timeline just this morning. 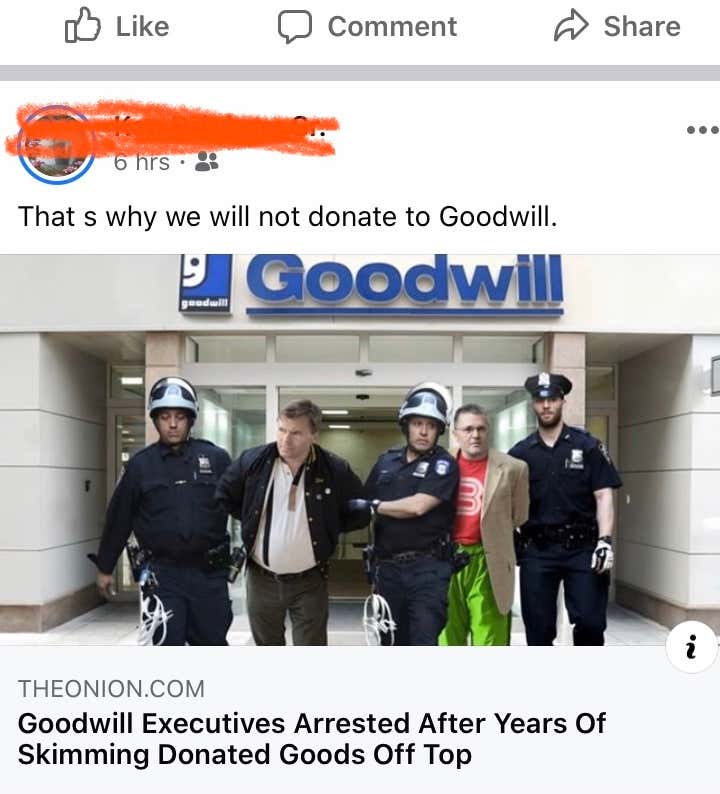 The Onion! Are you kidding me? Does not donate to Goodwill and help people in need because The Onion wrote a satirical article and he bought it like a Zillion Beers shirt at the height of Dana B's reign. Maybe this coronavirus is actually a good thing. I heard the only people that can actually get seriously sick off this were the elderly. Maybe some population control would do wonders for the internet. Wipe the slate clean of the incompetent. Natural selection like you read about.