The penultimate day, Day 16, of the 2019 Movie Rankings Countdown has arrived. Today and tomorrow, leading up to the 92nd edition of The Academy Awards, I will be revealing my rankings for all 185 new movies I watched this year.

This is probably the most recognizable group of 10 movies that we have seen yet in this countdown. We have the biggest movie of all-time, the most nominated movie at the Oscars, a few A24 joints, a major animated movie and few other gems in between. Let's take a look at movies 20 through 11... 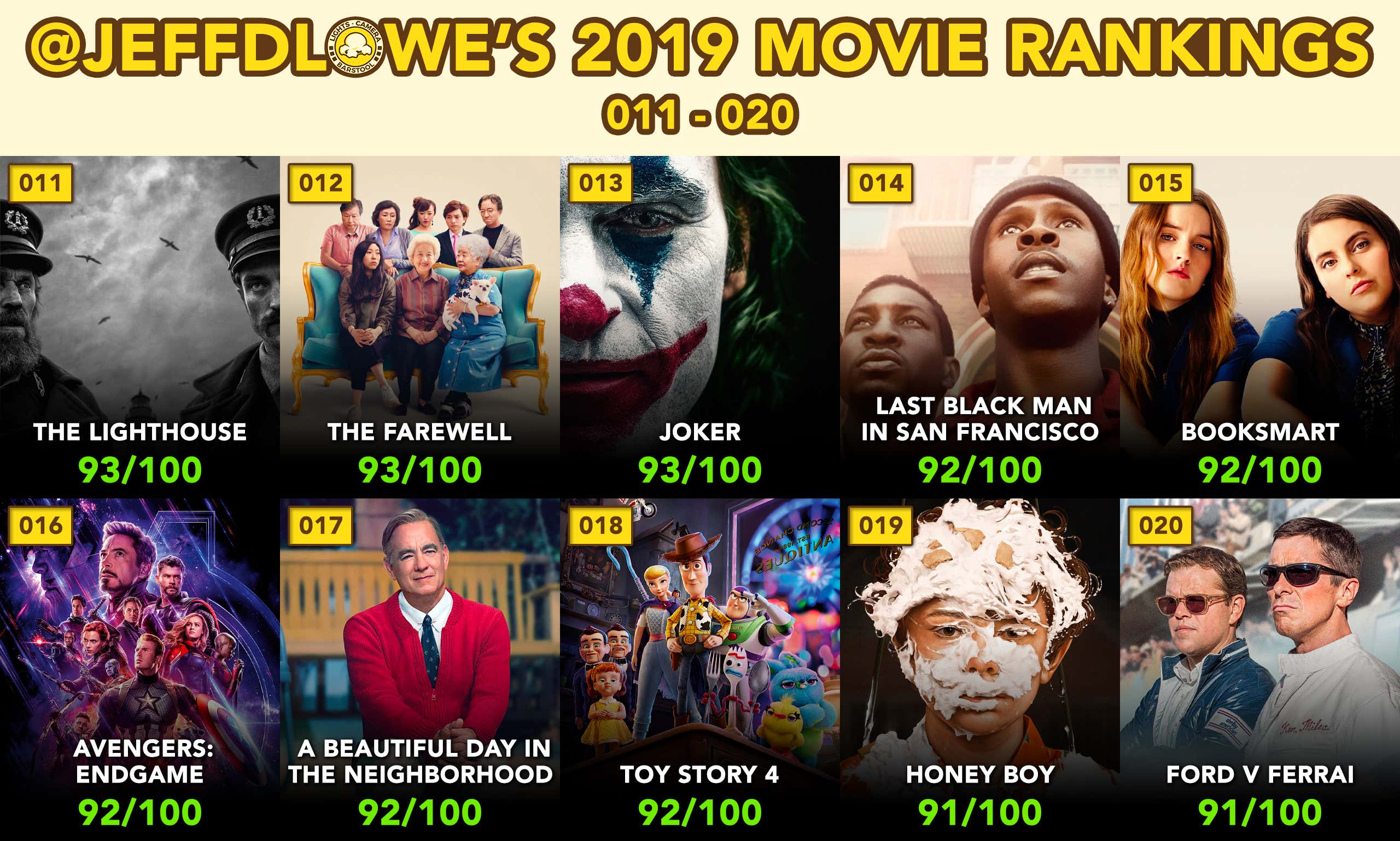 It's very hard to not appreciate the painstaking attention to detail that went into the making of this movie. This movie feels so fucking real, you sit there in your movie seat, but it's almost as though you're in the passenger seat during these races. Having a studio commit to a large budget that allows for a movie packed with practical effects and stunning cinematography, as well as a monster cast, is a breath of fresh air.

19) Honey Boy (91/100): This is the second half of a great year for Shia LaBeouf, who wrote this movie based on experiences from his own life...

The last movie I saw in 2019, 'Honey Boy' is a brilliantly made movie with a beautiful story from LaBeouf. It's such a personal, raw movie and I was completely entranced by it. 'Honey Boy' breaks down the walls of the conventional biographical drama and paints an artistic picture of LaBeouf's life growing up in Hollywood. From the director Alma Har'el to a strong cast led by LaBeouf, Lucas Hedges, and Noah Jope, 'Honey Boy' deserved a ton more love last year.

18) Toy Story 4 (92/100): This might be an unpopular opinion but I think people are letting their opinion of "we didn't need this" get in the way of the fact it's another great movie in the franchise. 'Toy Story 4' slips perfectly into the storied franchise with an intriguing new story focusing more on the feelings of the toys themself. Call me a Disney shill or homer, but I have a hard time seeing how anyone can really hate what Pixar did with the fourth movie (even if it is unnecessary).

17) A Beautiful Day in the Neighborhood (92/100): It's crazy to say this, but I think it is true: a Tom Hanks biopic about Mister Rogers was completely overlooked…

'A Beautiful Day in the Neighborhood' is exactly the type of biopic that sparks my interest and it is thanks in large part to the interesting story angle. Instead of being straight through the eyes of Mister Rogers, or having a "beginning to end" timeline, the slice-of-life style through the eyes of a journalist reporting on him makes the movie feel like something different than we've seen before. Hanks was subdued and fantastic in the lead role but director Marielle Heller, who made the incredible 'Can You Ever Forgive Me?' with Melissa McCarthy, continues to impress me.

16) Avengers: Endgame (92/100): For fanboy reasons, this is my favorite movie of 2019, but I also think it's a flat out great comic book movie. Funny enough, people will either think this movie is too or too low in my rankings. It might be the most emotionally made movie in the entire MCU, diving as deep as ever into the popular superhero characters. 'Avengers: Endgame' had a great balance of action, laughs and high-stakes tear-jerking moments. There is certainly bias involved, but I still can't imagine any movie living up to the hype quite like 'Avengers: Endgame' did for me. This theater experience was…

Not every movie should be like this, but for the event of a generation? I will take this every single time!

Olivia Wilde absolutely went for it with this movie in her directorial debut and my goodness, somehow she nailed it. There isn't anything new about the coming-of-age concept, but 'Booksmart' is so fucking out there and different than anything we've seen that I couldn't get enough. It caught a ton of comparisons to 'Superbad', which I get to an extent, but this movie really had a distinctly unique vibe to it. Every scene feels so different, yet works together narratively in a very cohesive way.

Another beautiful movie in terms of both acting and style, 'The Last Black Man in San Francisco' is so inherently human on every level, right down to the smallest of details. There's just a tender beauty to this movie's style and story and I really think it's a can't-miss release from 2019.

13) JOKER (93/100): You guys hear about this movie? Summing up my thoughts on this movie is a nearly impossible task, so you can find my full review by clicking here, but I am clearly in the camp of thoroughly appreciating and enjoying what was done with 'JOKER'. It was an all-time performance from Joaquin Phoenix and I think we've made this movie into something that it isn't actually trying to be.

12) The Farewell (93/100): Oh, look, A24 again! 'The Farewell' might be the most snubbed movie in my entire rankings when it comes to Oscars nominations…

The movie didn't get a Best Picture nomination but, more shockingly, Awkwafina (who won at the Golden Globes!) wasn't even nominated for Best Actress. This movie is a dynamic family story from top to bottom with a great blend of dramatic and comedic moments. Awkwafina's best role to date is sentimental and glowingly relatable. This is not a movie you should watch if you aren't in the mood for a few laughs and many cries.

This is one fucking weird-ass movie, man, but my god did I love it. When this trailer came out I (along with Large, who watching me type this) called this the most pretentious pile of shit ever made. I have since eaten those words. 'The Lighthouse' is a well-acted, intense psychological thriller that has an awesome amount of humor that cuts right into the tension. The movie made me think, left me puzzled and had me embarrassed that I ever doubted this wild ride. (This is a movie that is for sure not for everyone…)

----
Here are the rankings so far in picture form… 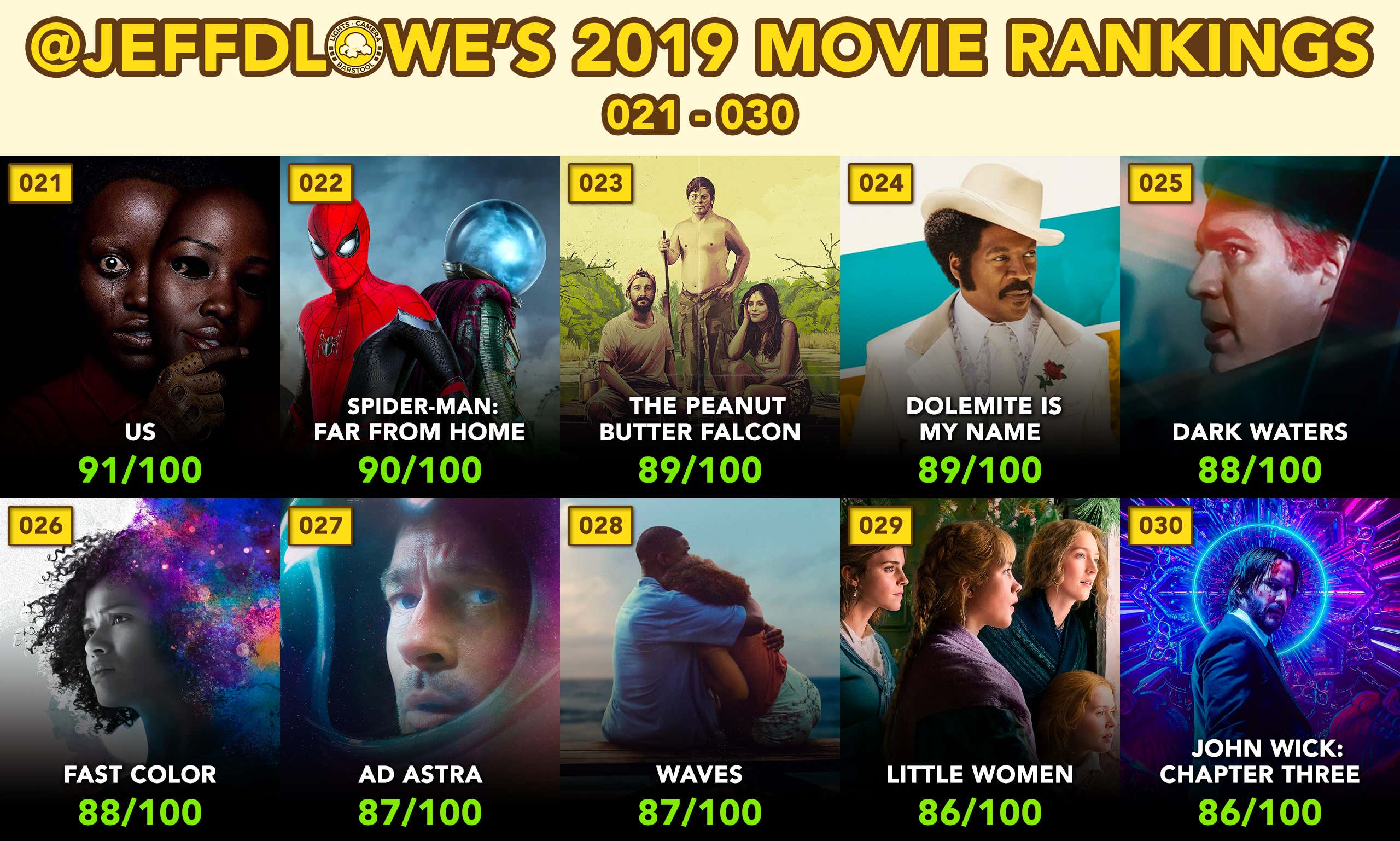 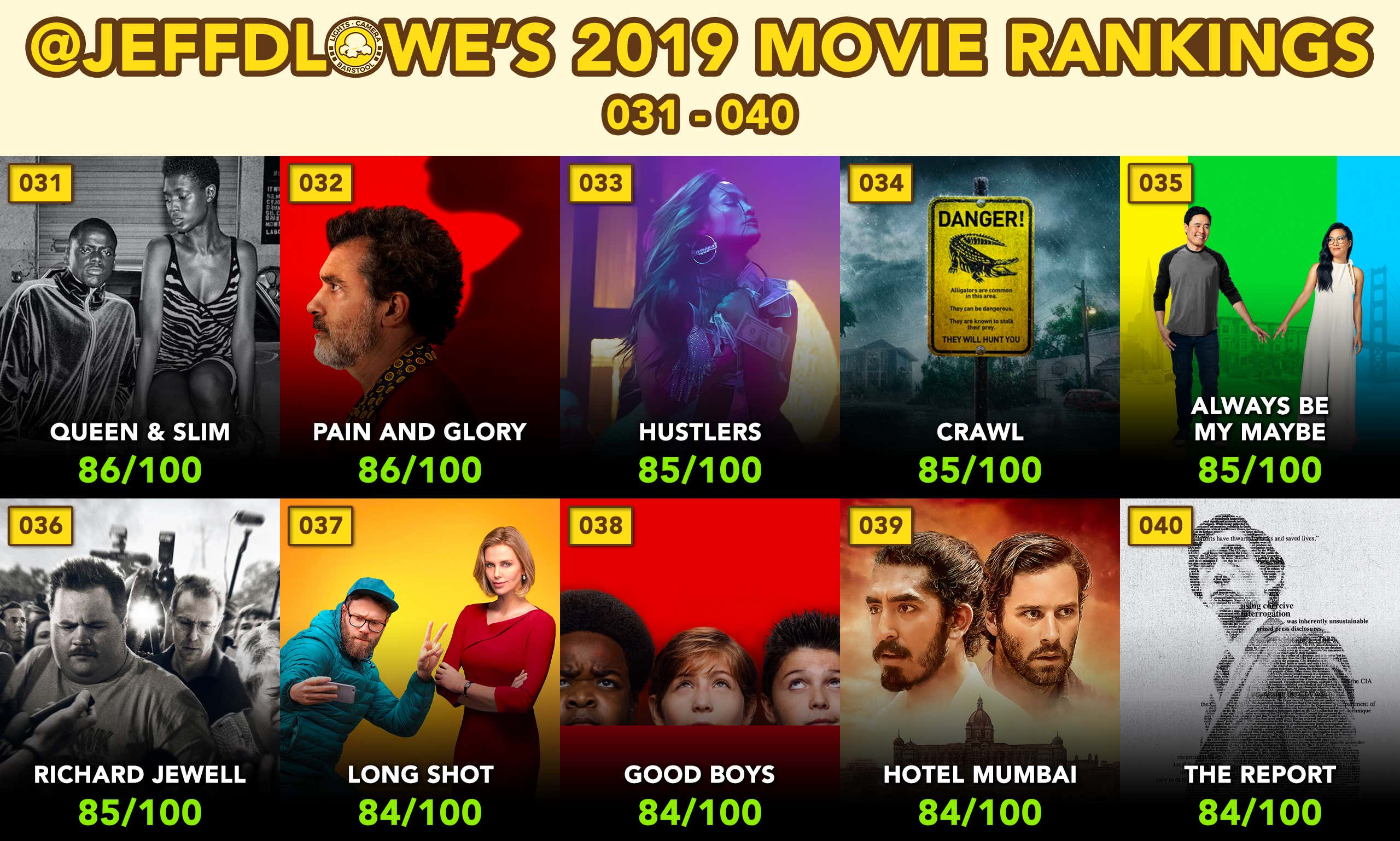 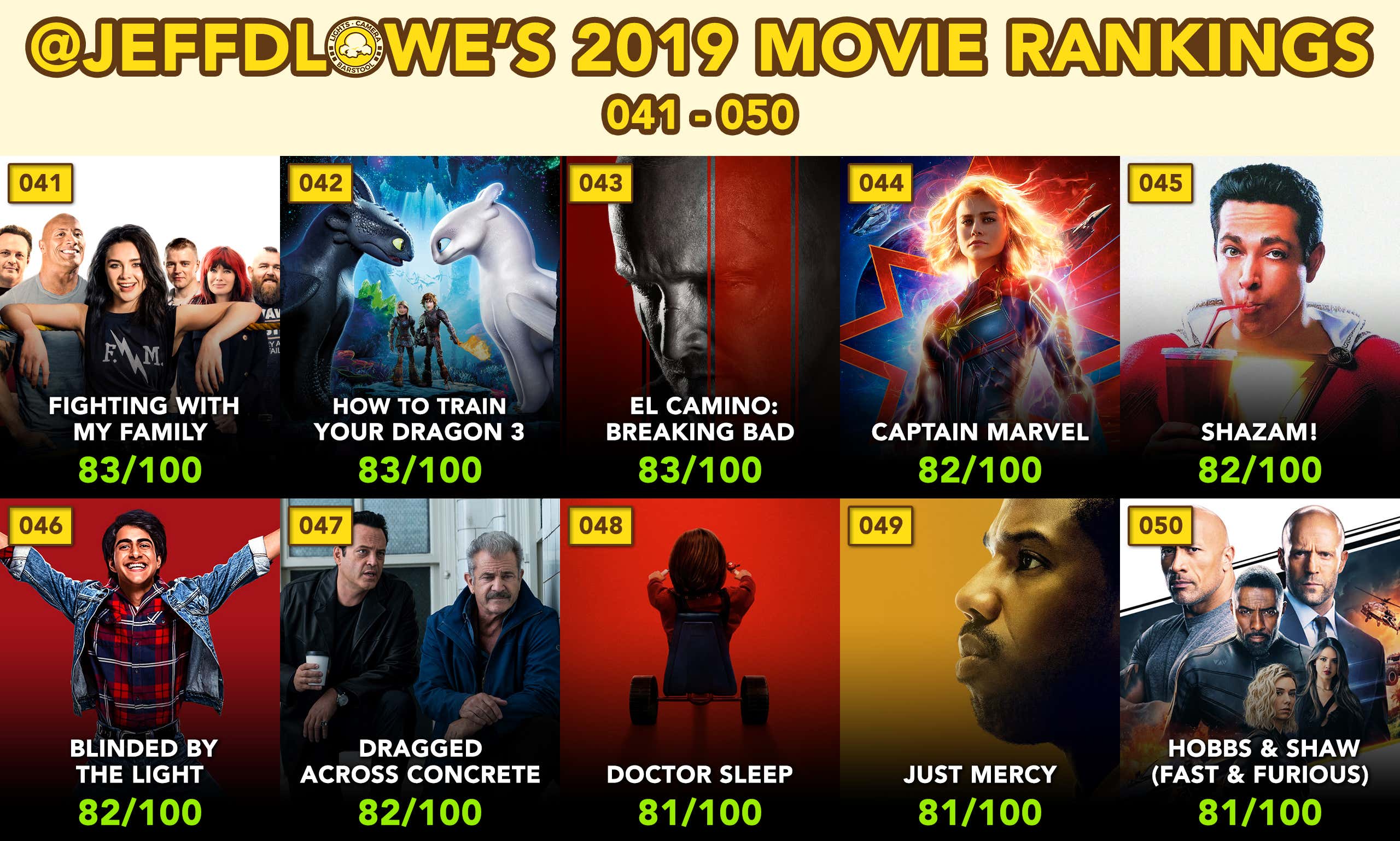 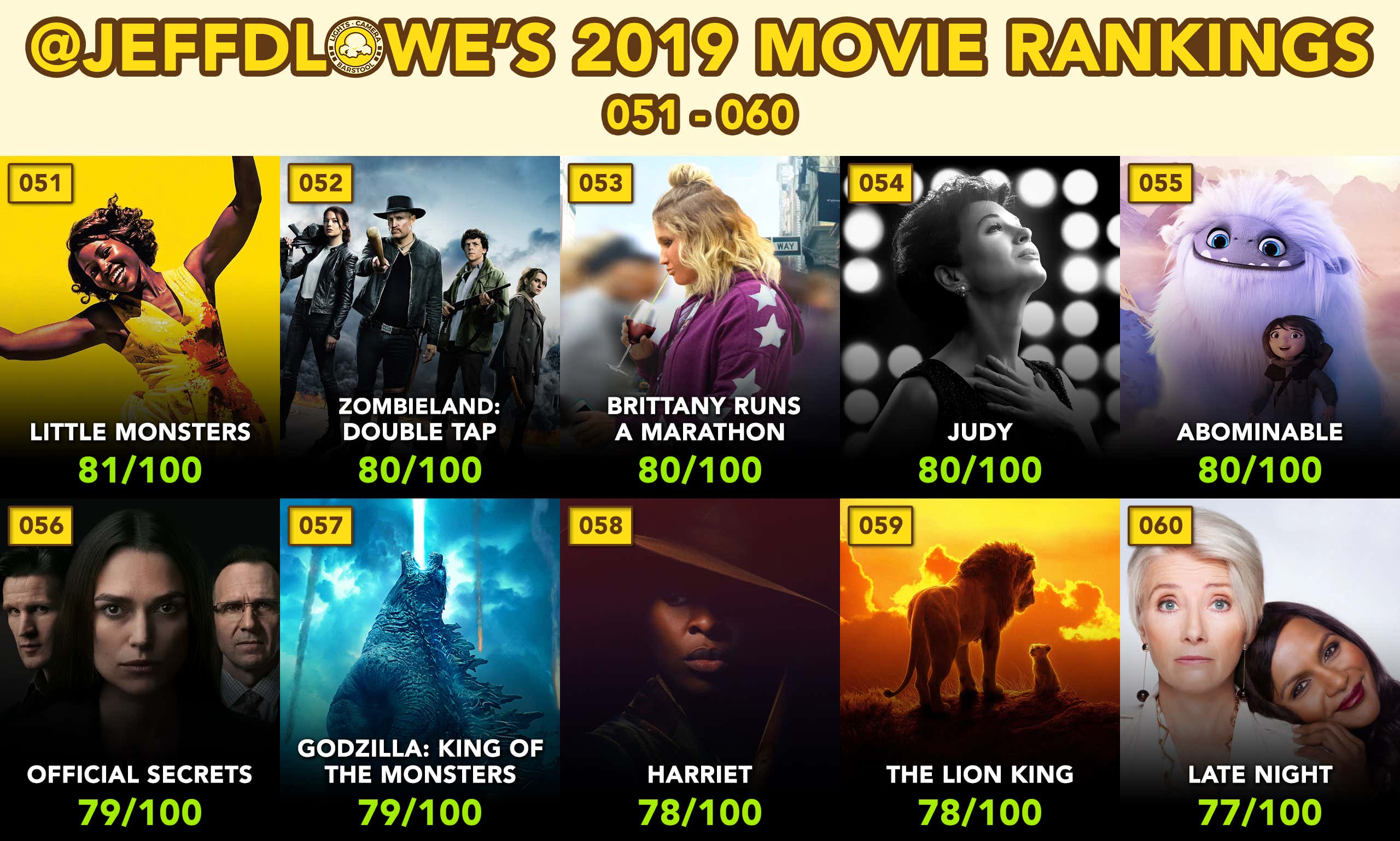 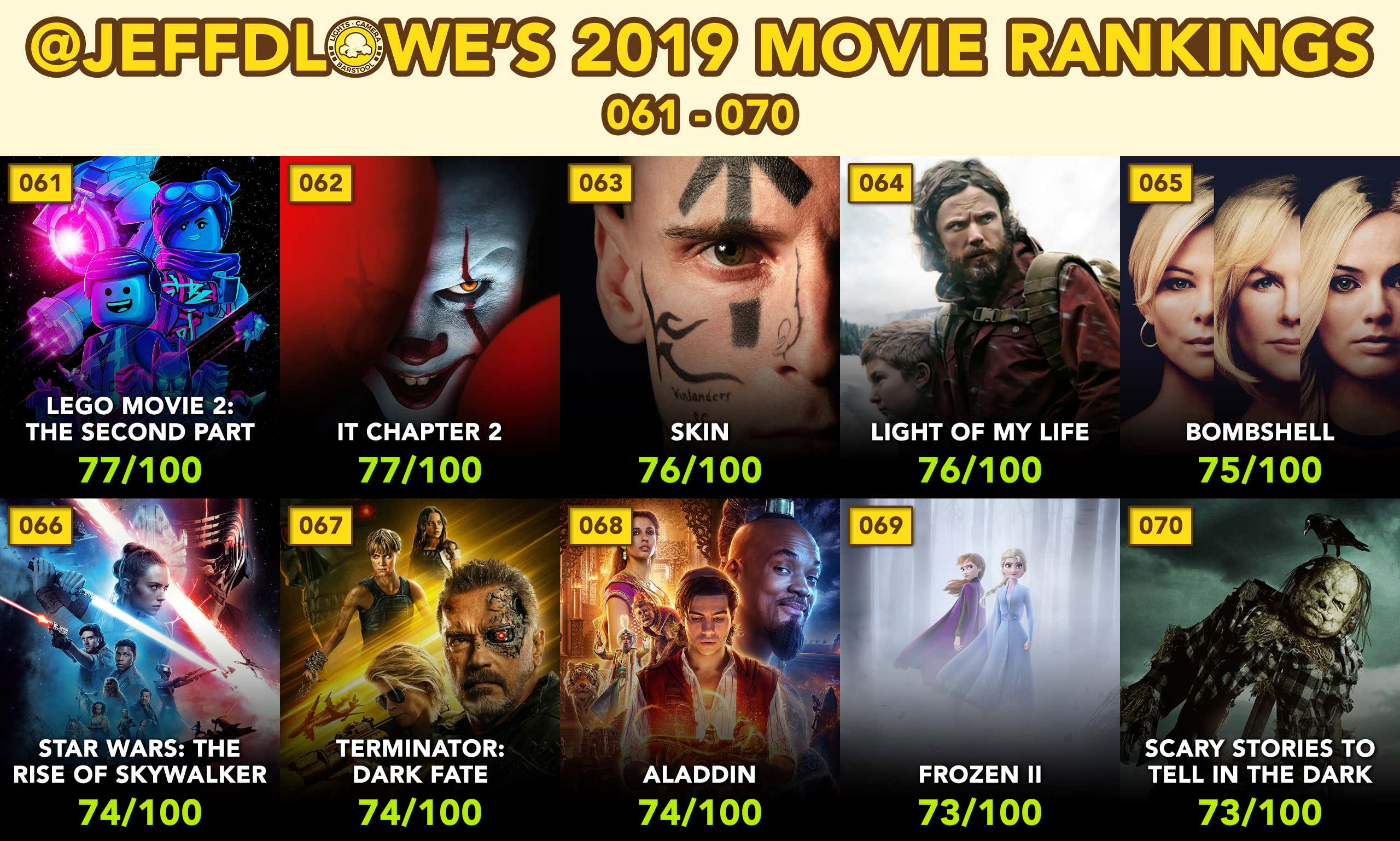 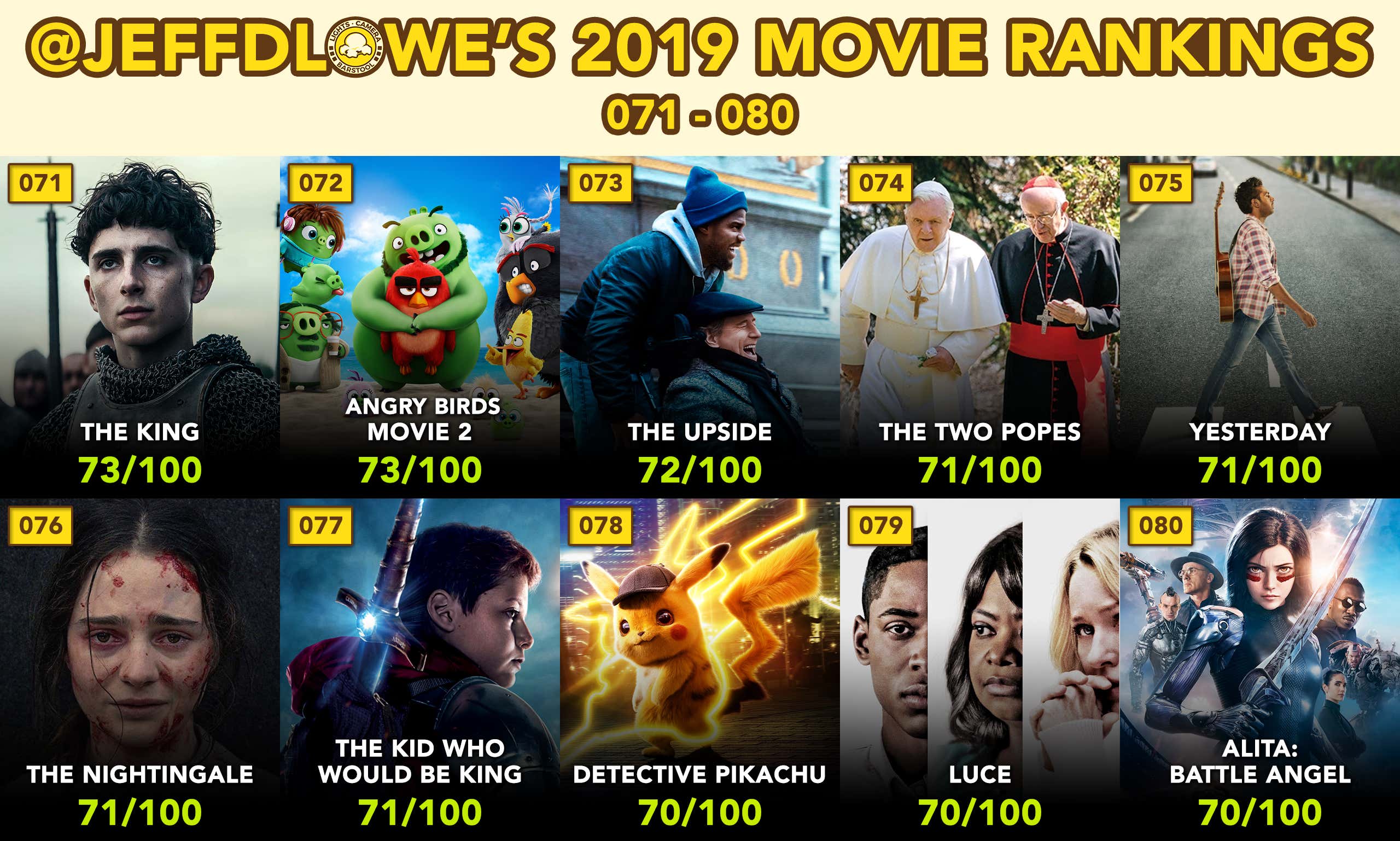 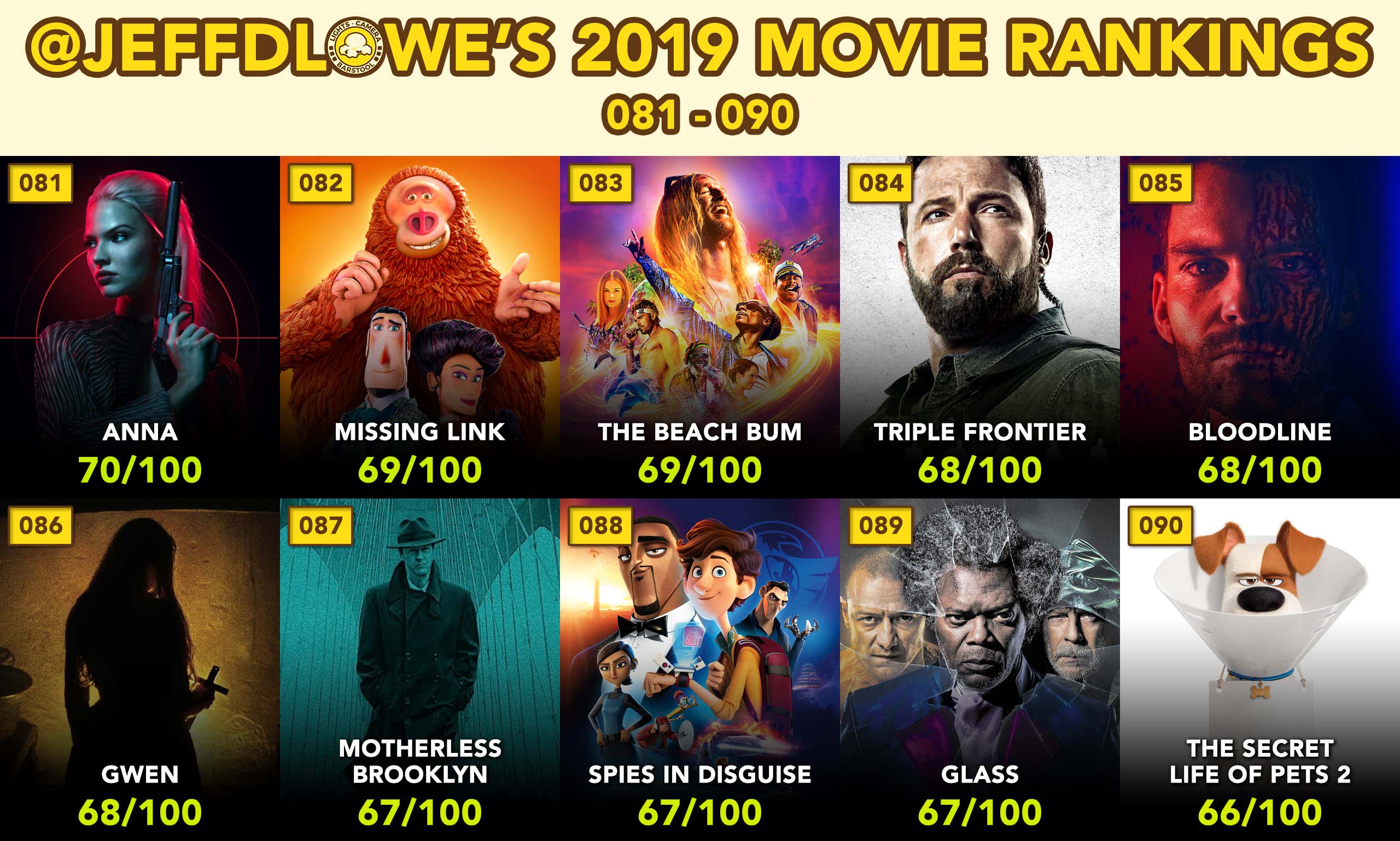 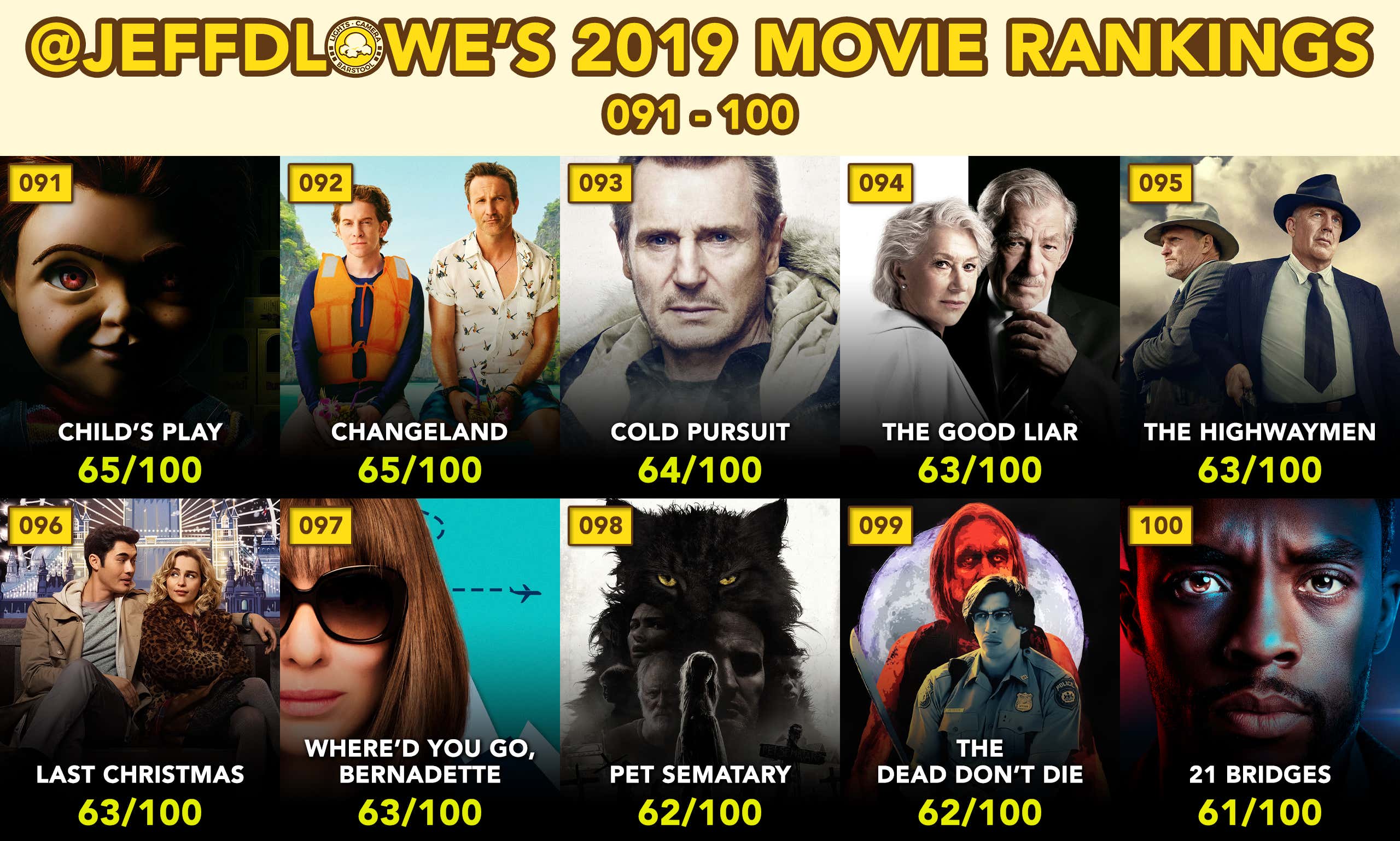 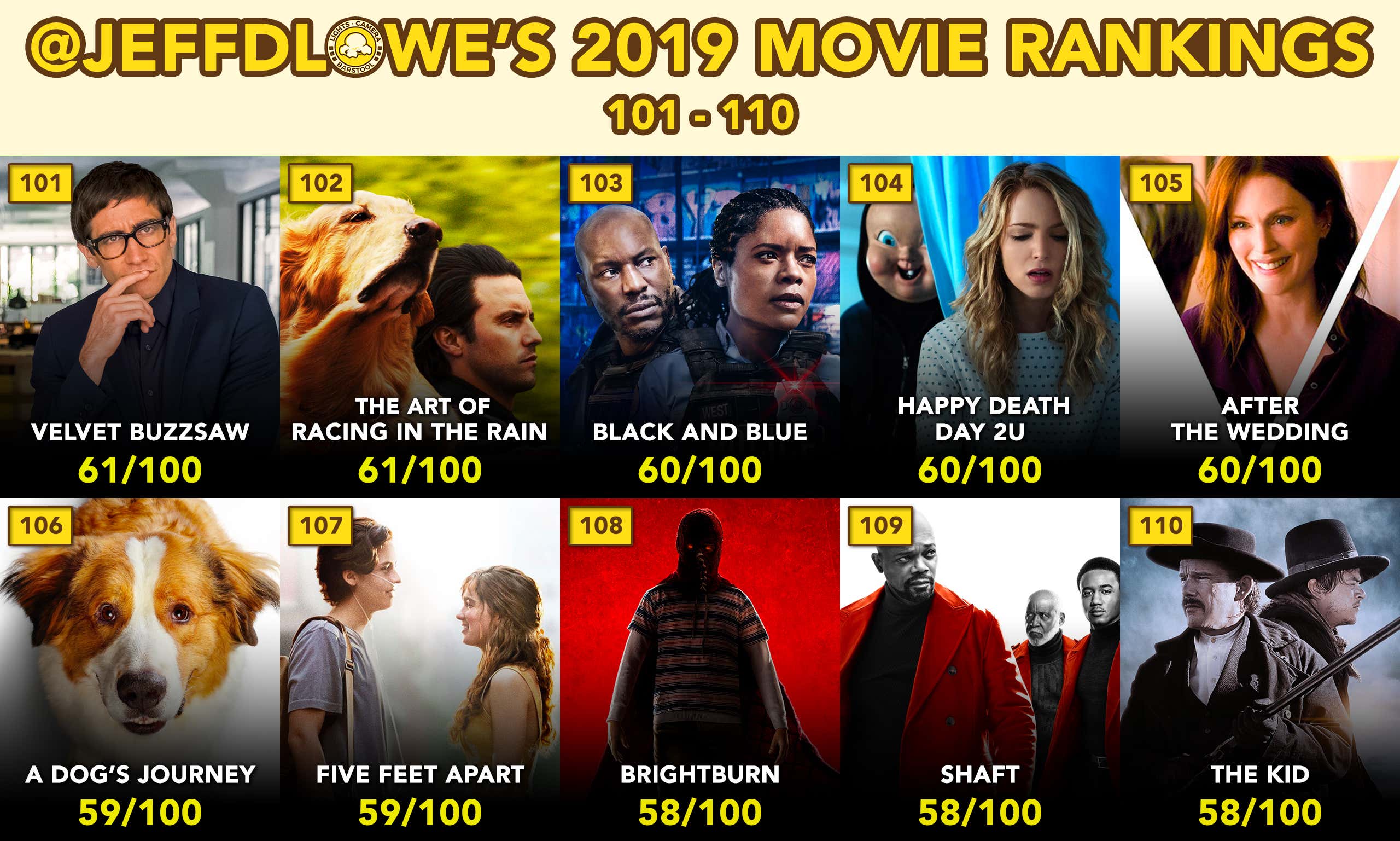 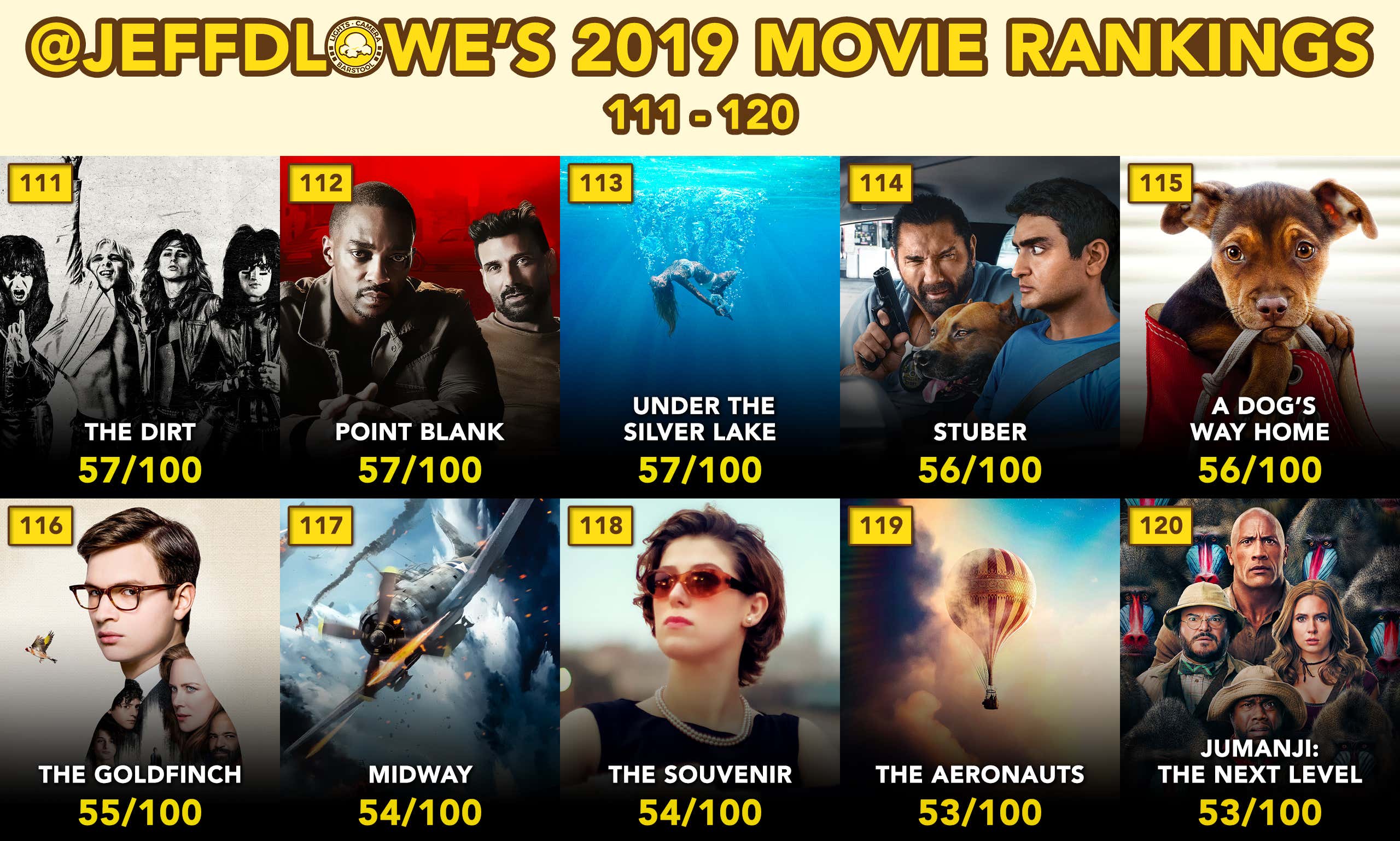 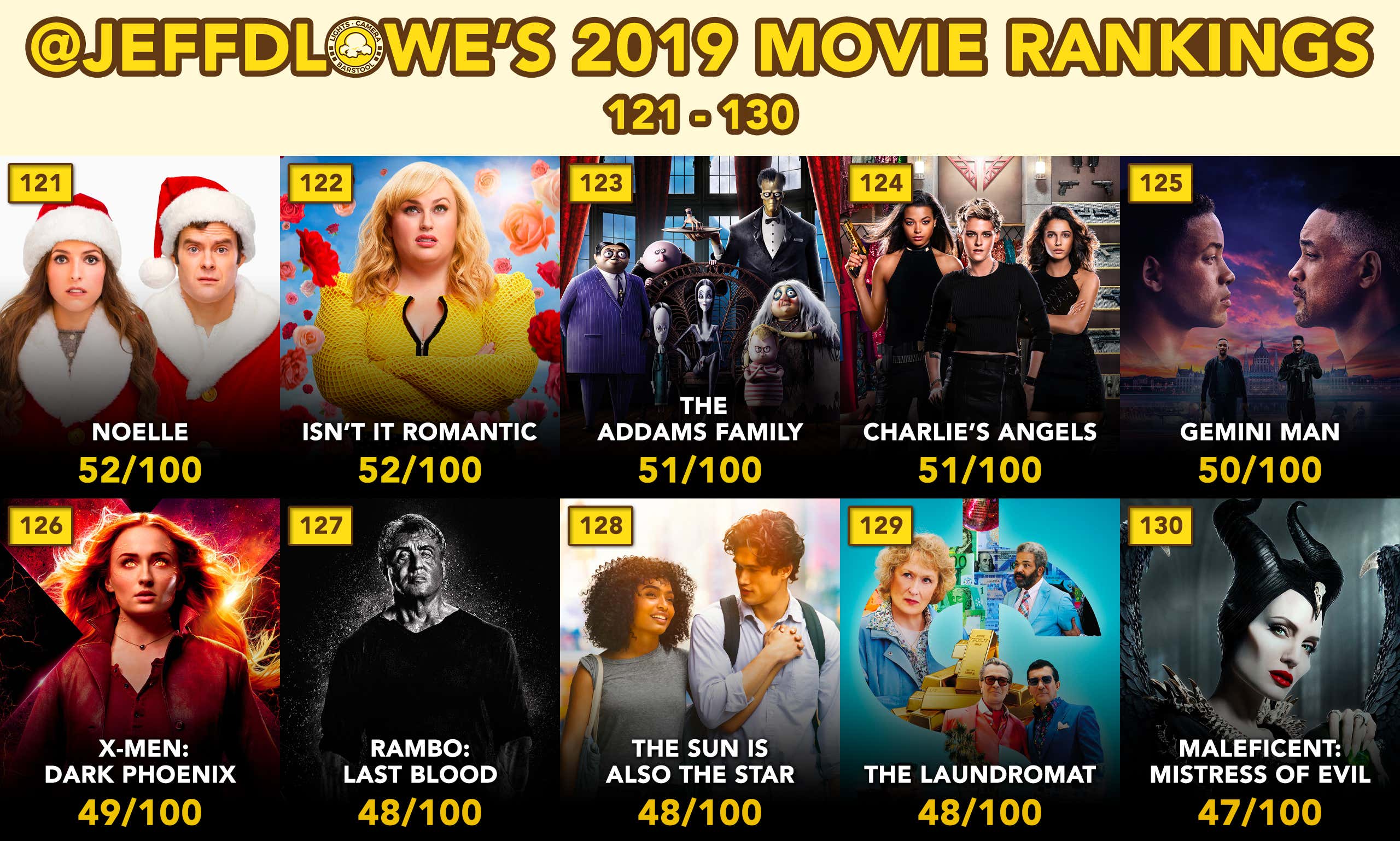 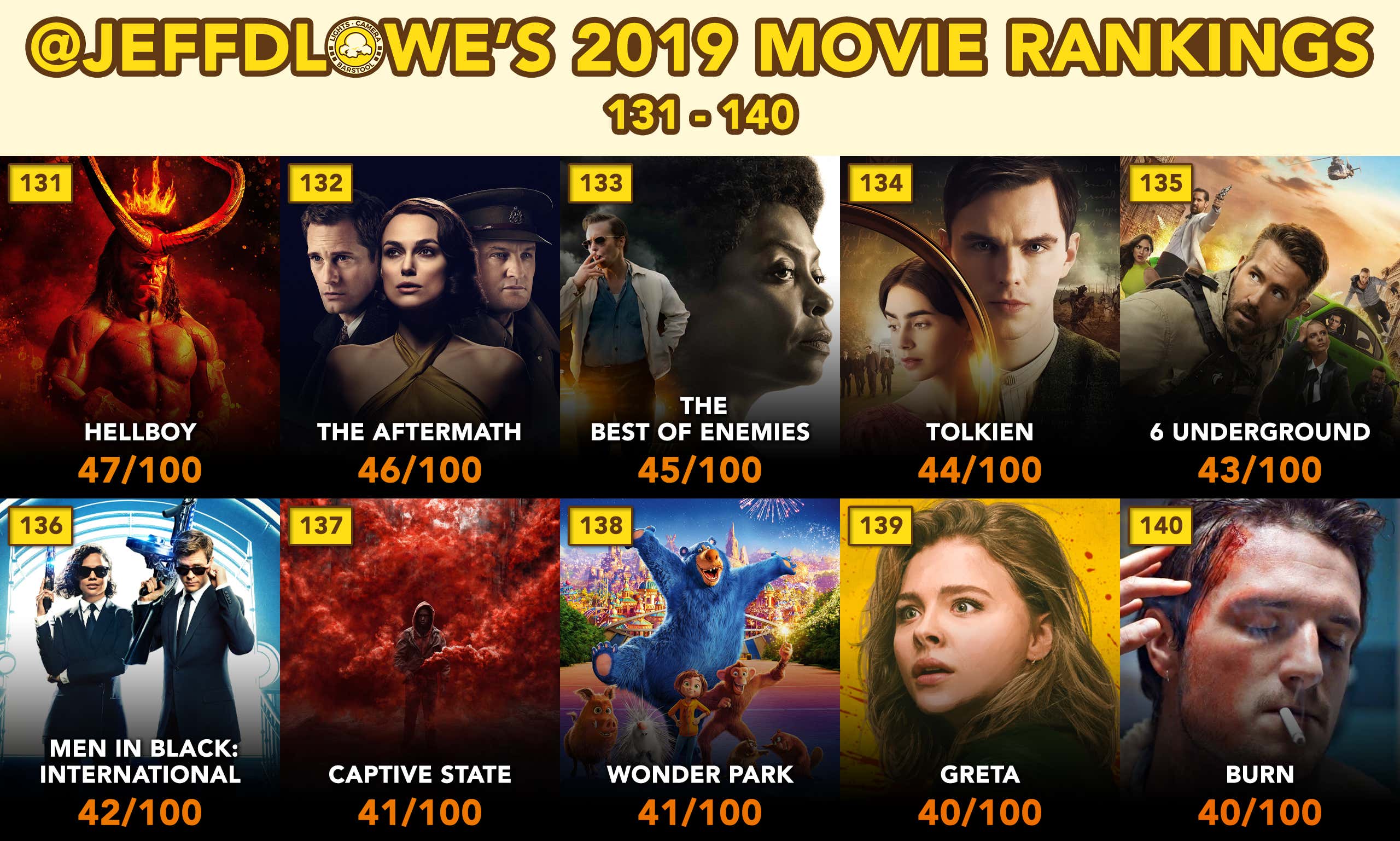 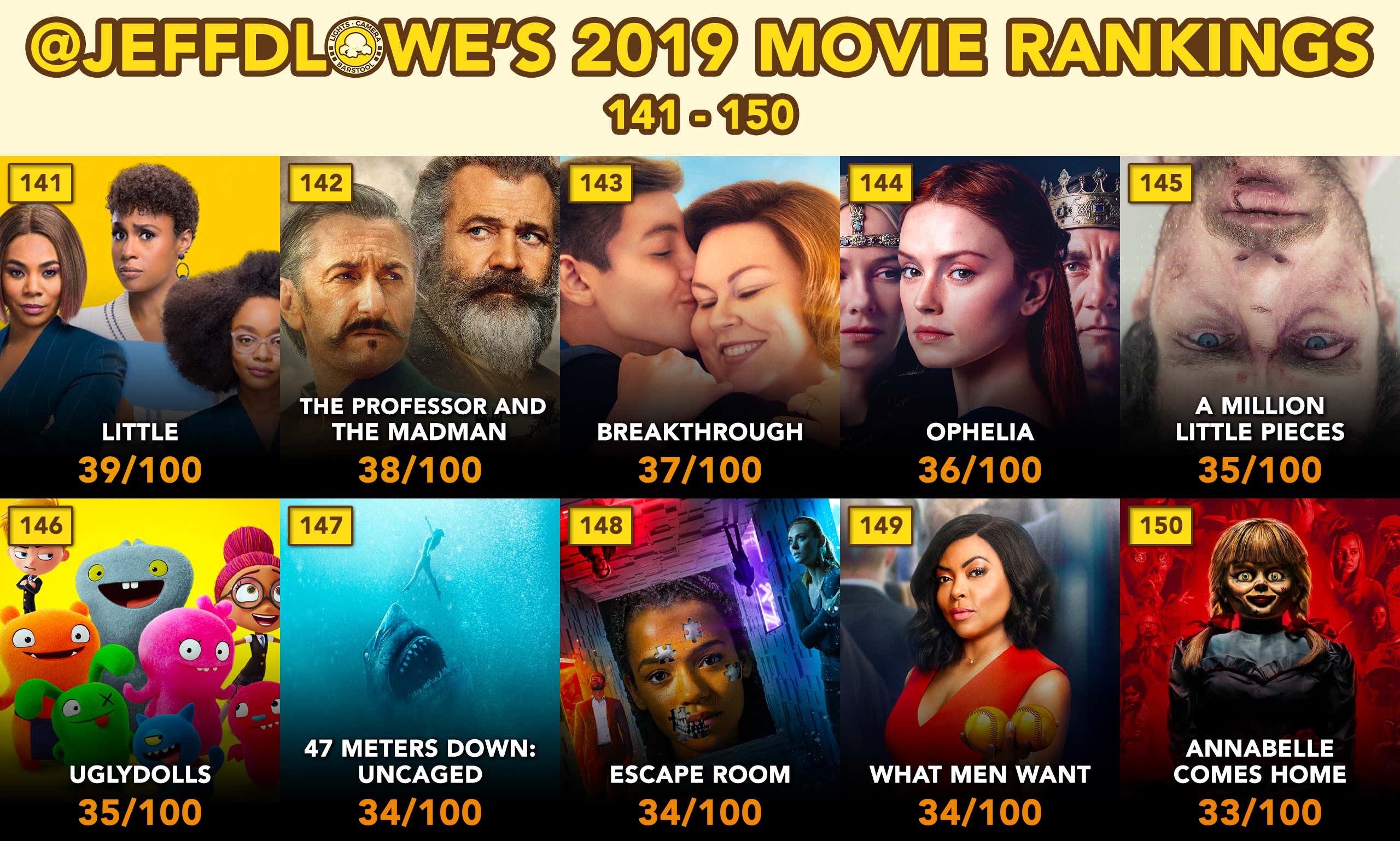 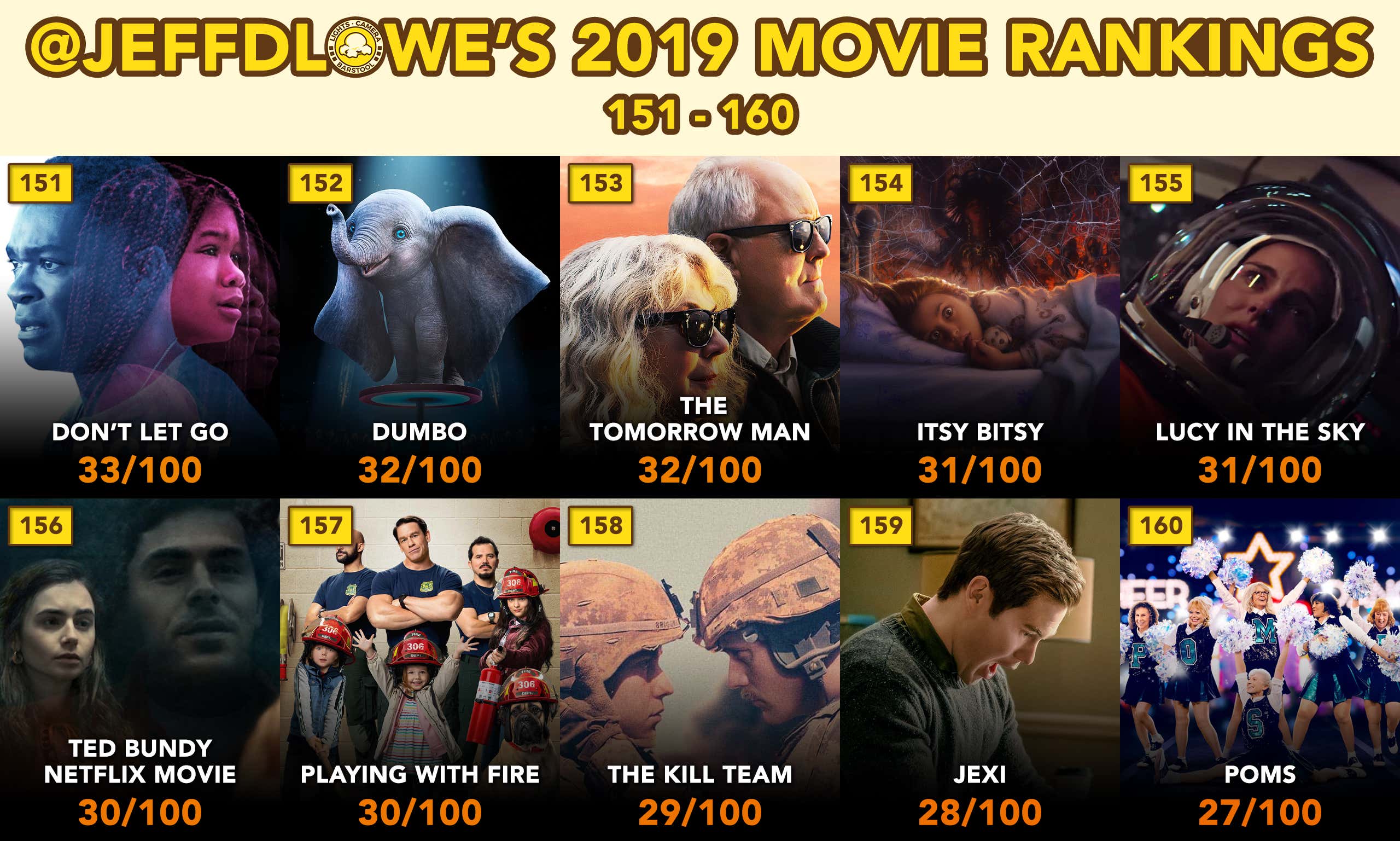 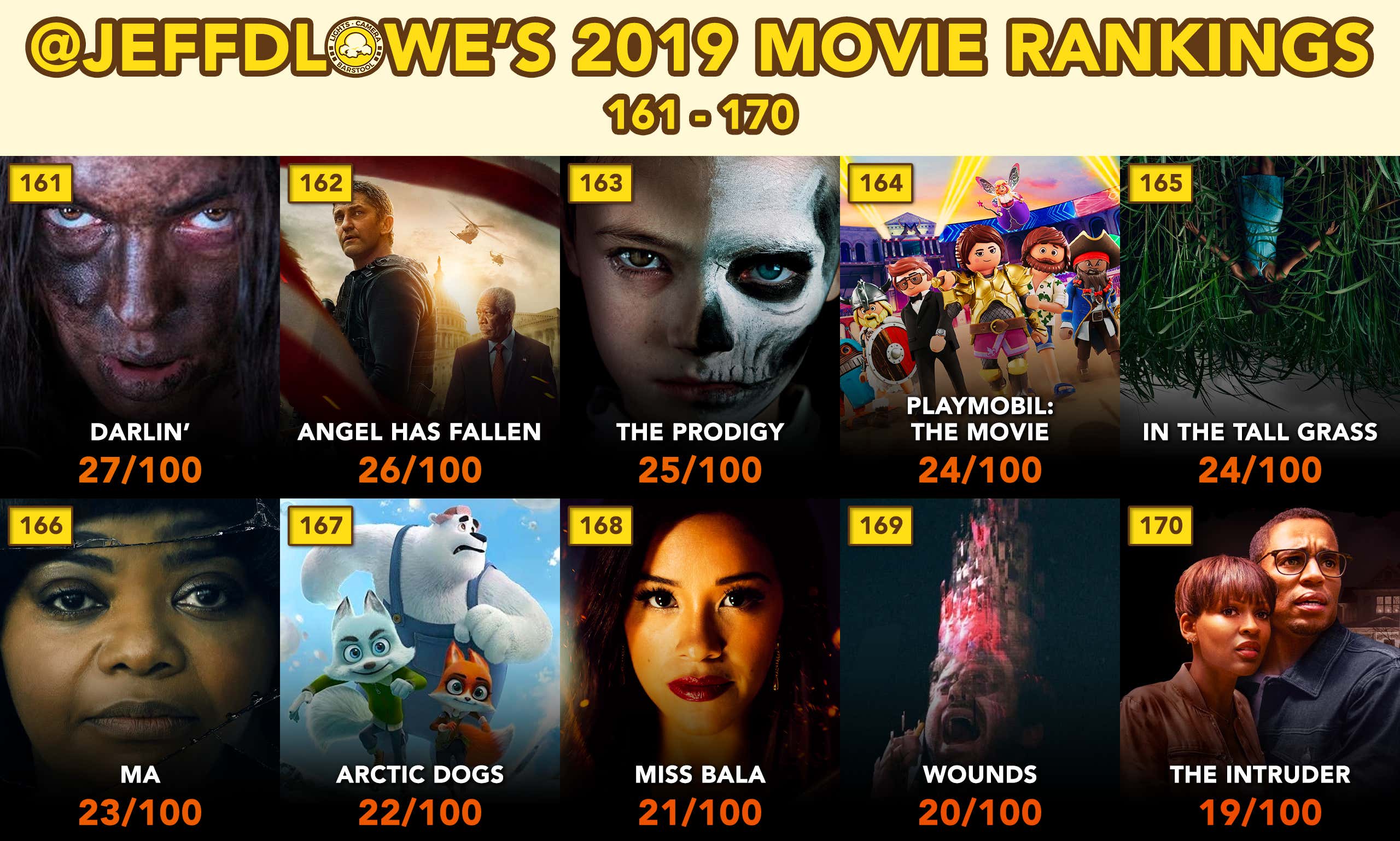 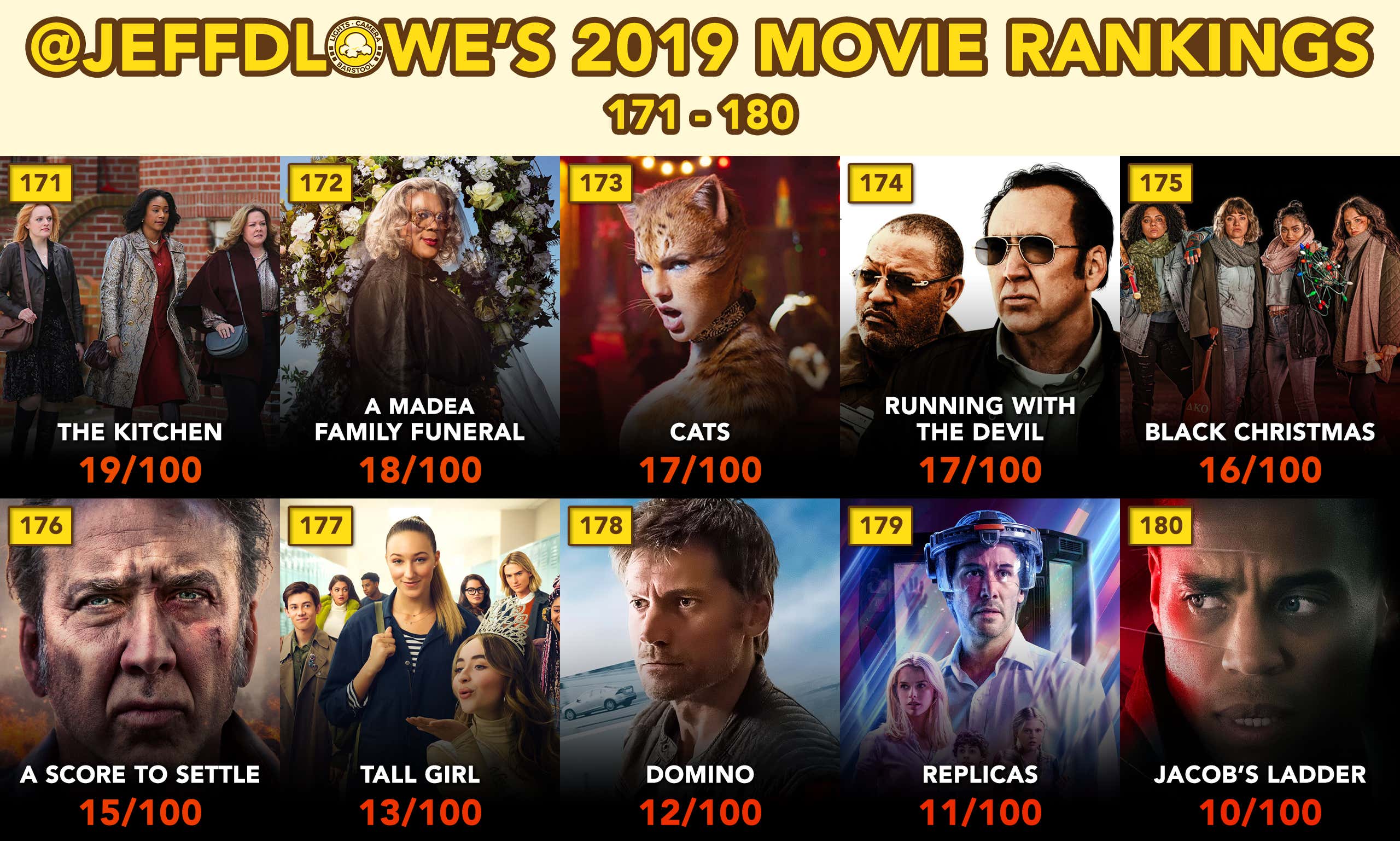 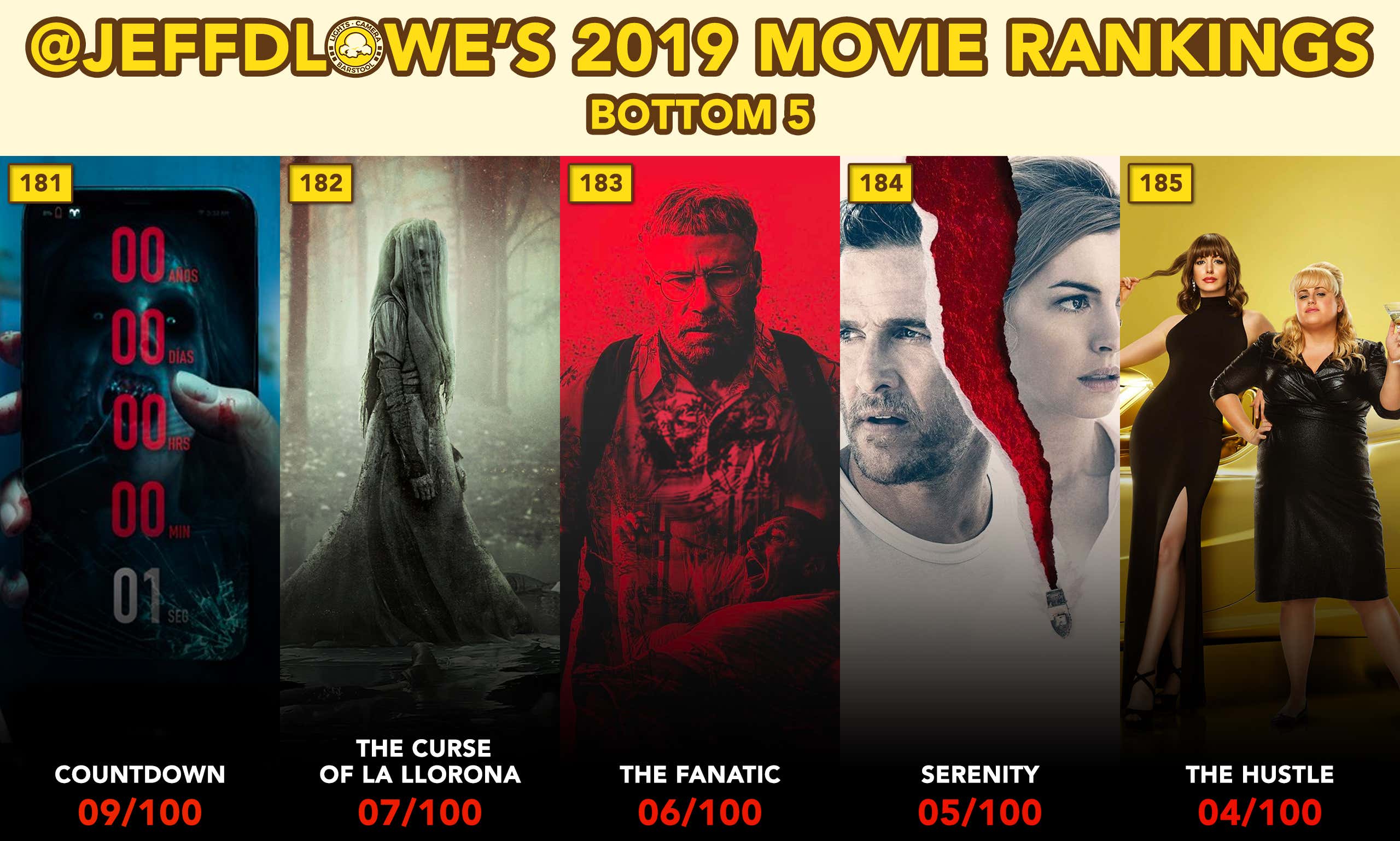 TOMORROW. THE TOP 10. While you wait, you can still rate all of the movies released on a scale of 0-100 below. Make sure to subscribe (click here) to Lights Camera Barstool to enjoy our twice-a-week movie podcast…