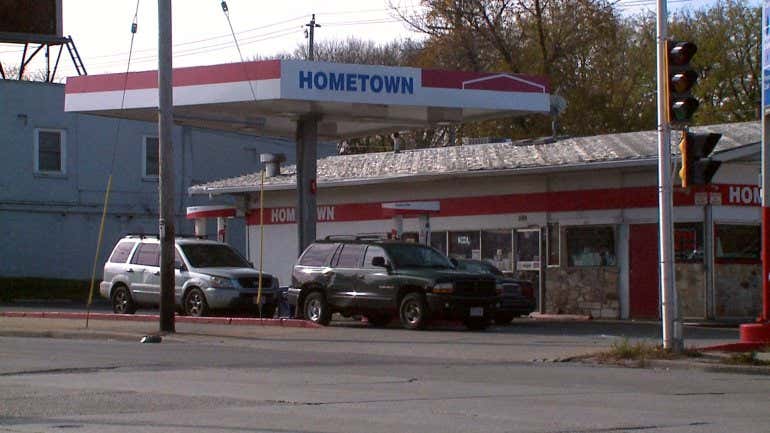 For decades, there's been a gas station at the corner of 35th Street and Townsend in Milwaukee's Roosevelt Grove neighborhood. If Milwaukee alderman Khalif Rainey gets his way, it won't be there for long.

"Under my watch, I won't allow it," the District 7 Alderman told FOX6 Investigator Bryan Polcyn...

"Keep in mind, it was right next to the chips, and across from the sunflower seeds," Alderman Rainey said during testimony before the Milwaukee Common Council's licenses committee in July 2019.

Right next to the chips and across from the sunflower seeds? Buddy,,,,that's the sweet spot of any gas station mini mart. Shows me this director really knew what he was going for. And it also tells me that there's really nothing to be worried about here if you're anybody who frequents this gas station.

Here's the thing--nobody is ever going into a gas station mini mart expecting cleanliness. Everybody knows that they're walking into a walled off pocket of filth and misery. Either you're getting your snacks from the gas station because you've been stuck on the road for the past 7 hours, or because you're just someone who just isn't health conscientious in the first place. You go in there to grab a soda, a bag of chips, a pack of smokes and you're on your way. So what difference does it make to you if someone turned that mini mart into a fuck shack the night before? Not a single difference at all. Especially since the chips and the sunflower seeds are concealed in a bag.

It's not like these perverts were sucking and fucking the chips and then putting them bag in the back. It's not like they were taking the hot dogs that sit out on the rotisserie and using them as sex toys, and then putting them back. At the very most, maybe some sweat hit the bag of chips but if you know that a porno was just filmed in there, you should be grabbing at least the 3rd bag of chips back from the front anyway. I don't know, man. It just seems like this alderman is making something out of nothing. He just seems like a power tripping asshole to me. "Under my watch, I won't allow it"? Really, bud? I can guarantee you that a fuck film isn't even close to the grossest thing that has gone down in a gas station mini mart. At least these guys seem like they were trying to put on an actual production here.