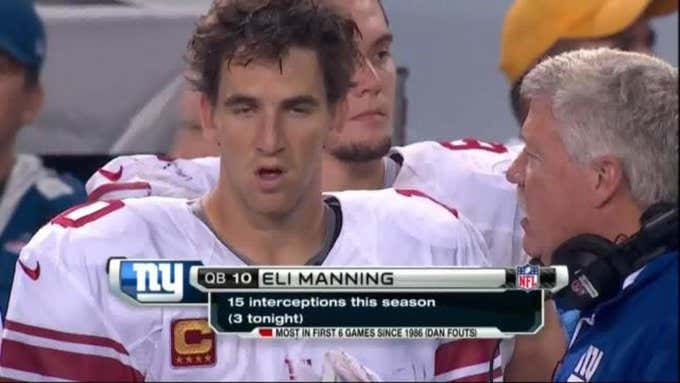 Author’s note: This is largely a repost, taken from a blog I wrote in September when Eli Manning was first benched in favor of Daniel Jones. When the internet was lousy with people declaring him, not just a Hall of Famer, but a mortal lock, nearly unanimous, no brainer first ballot Hall of Famer. I thought about reposting it the second time he was benched in favor of Daniel Jones, but decided to wait to see if he, in fact, decided to hang it up rather than subject himself to the humiliation of having to fight for a starting job, something no healthy Hall of Fame quarterback ever has. (Don’t Joe Montana me; he missed all of the 1991 season due to injury, and by the time he came back for one game at the end of ’92, Steve Young was the league MVP.) When I wrote this, Eli’s career record was 116-116. The only thing that’s changed is he finished 117-117.

I’ll state the obvious, right from the cold opening here. For me with Eli Manning, it’s personal. The runt of the Manning Litter had two good months over the course of nine seasons. And both of them cost the Patriots a banner. He won those two Super Bowls because he deserved to win. He outplayed Tom Brady. These thoughts haunt my every step. I’ve never gotten over those losses. And it’s only through a lot of self-therapy (and self medication) that I’ve been able to talk about the pain in a constructive way that helps my healing process. I’m glad I’ve had that breakthrough and I can share.

Now with that as preamble, people are not only saying Eli belongs in the Hall of Fame, but that he’s a first ballot? That it’s not even a question? We just put him in with no debate?  That those two championships are enough to qualify him for Canton regardless of the rest of his career. Of his numbers. And his record.

Wow. I had no idea that was the standard. That two Super Bowls gets you in automatically, like 3,000 hits or 500 home runs. So I guess we can vote Jim Plunkett in right now then. Just for starters.

I’ve said before I am all about the NFL Hall using postseason success. I don’t want it to just be like MLB where it’s all about your Baseball Reference page. Like I wrote when Rodney Harrison said Patriots players aren’t getting consideration that deserve it, guys like Troy Brown, Lynn Swann (237th all time in Receiving Yards) and Terrell Davis (78 career games) are in almost exclusively for winning multiple Super Bowls while guys like Rodney, Richard Seymour, Tedy Bruschi, Troy Brown and Deion Branch aren’t.

So if that’s the standard for Canton, that’s the standard. Personally I think in that being a .500 career quarterback is disqualifying. Because if you are good enough for football Valhalla, there’s no way you don’t win more games than you lose at a position that critical to success. But to be fair, Sonny Jurgenson is in with a career record of 69-71-7. Joe Namath is in at 62-63-4. But Jurgenson led the league in Completions three times, Passing Yards five times (setting the league record a couple of times) and Touchdowns twice. Namath led in Completions twice and Yards three times, while becoming the first passer ever to crack the 4,000 yards barrier. Eli has led the league in a category three times. All three were Most Interceptions

If Eli does get in, let’s just not pretend it’s for any reason other than those two four-game stretches in 2008 and ’12. It’s not for any sustained postseason success. In 16 seasons he made six trips to the playoffs and was one-and-done the other four times. It wasn’t for anything he did in the regular season. Other than cracking the Top 10 in some cumulative stats:

If you’re making him immortal on the strength of that resume, knock yourselves out. Just don’t kid yourselves. He’s in not because of how good he’s been, but just because of who he beat.