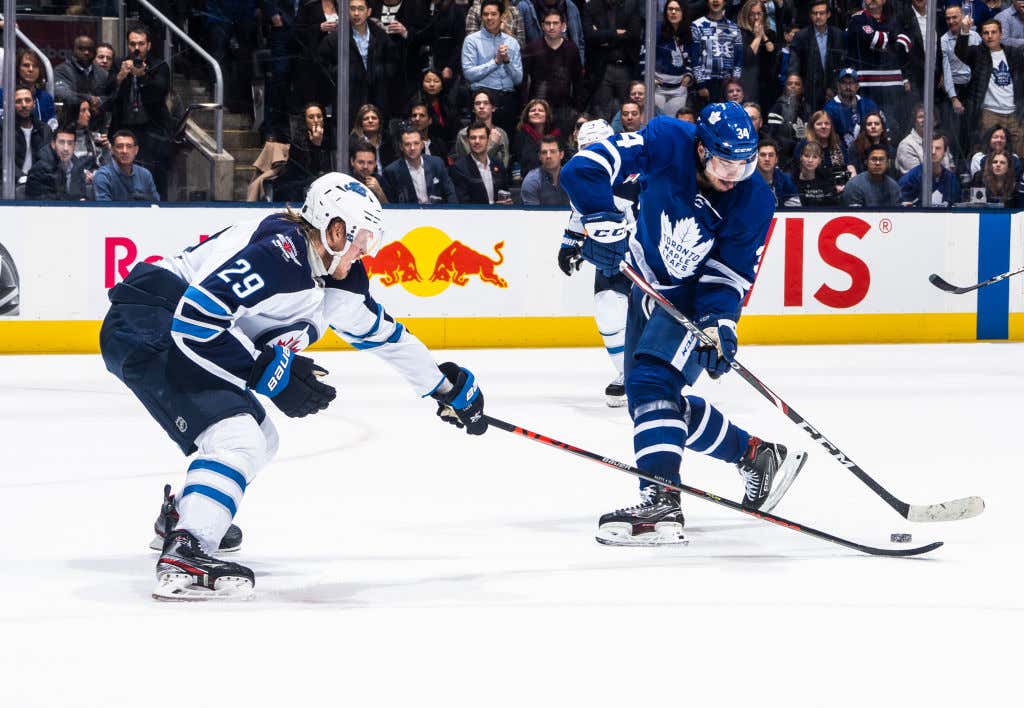 The Winnipeg Jets were in Toronto last night and if you didn't get a chance to see how this one ended yet, well then congrats on living an severely unfulfilled life because it was some of the greatest back-and-forth hockey we've seen since the Team North America vs Sweden overtime at the World Cup.

It sucks big time ass that Winnipeg and Toronto only play each other twice a year because this matchup is always a gongshow since the 2016 draft that sent Auston Matthews 1st overall to the Leafs and Patrik Laine 2nd overall to the Jets. I guess technically they could play each other 7 more times if they both made it to the Stanley Cup Final, but since the curse of Justin Bieber means that no Canadian team will win the Stanley Cup for the next 100 years, that'll never happen.

The first time these two teams played since the Matthews/Laine draft, the game went to overtime after Patrik Laine scored two 3rd period goals, and then capped off the hat trick in overtime. The 2nd time they played was another overtime game, and that time Auston Matthews had the game-winning assist. And then last night after scoring his 2nd goal of the night with less than 15 seconds left in regulation, Auston Matthews sent this one to overtime.

What a sick bastard. It doesn't even look like he's trying anymore out there. The game just comes so easily to AM34. But anyway, we had another OT showdown between the Leafs and the Jets and woah baby, this 3v3 was extra spicy. The only way to properly advertise how good this overtime was comes courtesy of Paul Maurice.

A free-for-all of fecal matter. A shitshow. Just so eloquently and beautifully put by coach there. And I defy you to spot the lie after watching this full OT period.

Goodness gracious. I need a quick cigarette break after all that.

I mean what more could you possibly ask for out of 3v3 overtime? I guess the only actual answer to that question would be a goal and for this game to not get decided by a shootout, but it was still more of a rhetorical question. Because this one had everything minus the game winning goal. It was back-and-forth the whole time. So many chances on both ends. 2v1's, 2-on-0's, breakaways, you name it. It had stars out there on every shift--Matthews, Laine, Marner, Schiefele, Tavares, Ehlers, Nylander. Every time someone touched the puck, it was someone who you knew could do something that would blow your brain into a zillion pieces. And most importantly, there wasn't a single stoppage until there were just 12 seconds left. Combine all that with the fact that we got to listen to Jim Hughson's majestic voice on the call and this was everything. In it's purest form, it was a free-for-all of fecal matter.

The Jets eventually won in the shootout, but we had Laine and Matthews both scoring on back-to-back attempts.

That Matthews finish was definitely slick, but how about the balls on Patrik Laine to pull one from the high slot in a shootout. What a cocky bastard. I love it. Fuck, we need more games between these two teams because only getting this matchup twice a year is a total cocktease.

Sidenote: I don't know if I want to write a full blog about this yet because I'm not sure if the time is right, but Auston Matthews is going to go down as the greatest American hockey player of all time. I'm a huge Modano guy so I feel super dirty for saying that, but it's inevitable. First American and first Leaf to score 30+ in each of his first 4 seasons.

31 goals already this season and the Leafs still have 37 more games to go. Have a season, Pablo.