I take absolutely no pleasure in clocking into the Blogging Factory only to report this type of news to you but it's part of my duty to. When I first got a job here 3 1/2 years ago, I prayed that I wouldn't have to cover a story like this on my beat but here we are.

This lovely woman was apparently minding her own damn business when her landlord stopped by unannounced.

First thought: hate that. Don't do that, landlords. Luckily for me, I am a homeowner but many people aren't so fortunate. When you're at your rented home, there should be the same expectation of privacy so long as the renter is treating your home with respect and is abiding by the terms of the lease. Common sense.

At no time and I mean at no time should a landlord have an entire bucket full of human shit ready to toss on their tenant. That violates everywhere tenet of the contract, I'm quite sure.

Now, should you ever get in this type of situation, I recommend doing exactly what the shit-covered lady here did. You MUST and I cannot stress this enough... YOU MUST LEAVE ALL POOP IN PLACE. YOU MUST NOT REMOVE A SING SMEAR OR STREAK. Everything has to be documented and documented in full.

2nd Thought: "You understand this has been going on and on," said Poop Woman. Look, I hate calling her that but adjectives are important and I have no real choice. You need to know whomst I'm speaking about.

"I dont know anything. All I know is that you're covered in feces," calmly replied the officer.

That's an excellent point by the officer. At this point when you pull up, you are on a fact-finding mission and that's it. Sure, your eyes will tell you that the woman covered in shit, Poop Woman, was in the wrong but day 1 at Police Academy, they teach you that people can smear poop all over their bodies in order to frame you. Smart of this guy to not fall for one of the oldest tricks in the ole book.

3rd thought: "She rubbed this in my face. This is shit," Poop Woman forcefully told the officer. "I know," he replied back because he was aware that the brown stuff on her face was indeed poop.

But then that's where the real detective work takes place. The officer notices that all the poop on Poop Woman is dried. The landlord, who is also covered in poop, is wetter. Now, lest we forget, wetness implies freshness in the poop game. And for that reason, Poop Woman's goose is cooked. We KNOW that she's been keeping a bucket of poop in her rental home just waiting for her landlord to come around again. Once she saw the landlord, it was like she was painting up for a round of realistic paintball. She was camo painting her face with brown goo from her own asshole. I've seen it a thousand times.

FURTHERMORE, as even more proof, someone with another's shit on their face does not do this move. 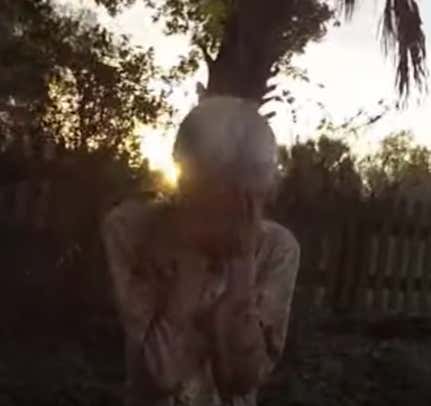 Gotcha. You don't rub someone else's poop deep into your pores. Do you have any idea how porous the human face is? Do you? Of course you do. Every crack in your face is consumed by shit. You know that but you didn't mind because it was your own poop, wasn't it? Don't answer that, Poop Woman. You have rights.

I think we can close out this investigation at that point so the officer returns to the vehicle to brief his boss.

"What kind of poop?"

Well, yes. But that's another blog for another day. Good work, everybody. You're dismissed.

PS: Normally I wouldn't call a woman Poop Woman under any circumstances but when you are the poop thrower, you catch these blogging fingers. Let that be a warning.