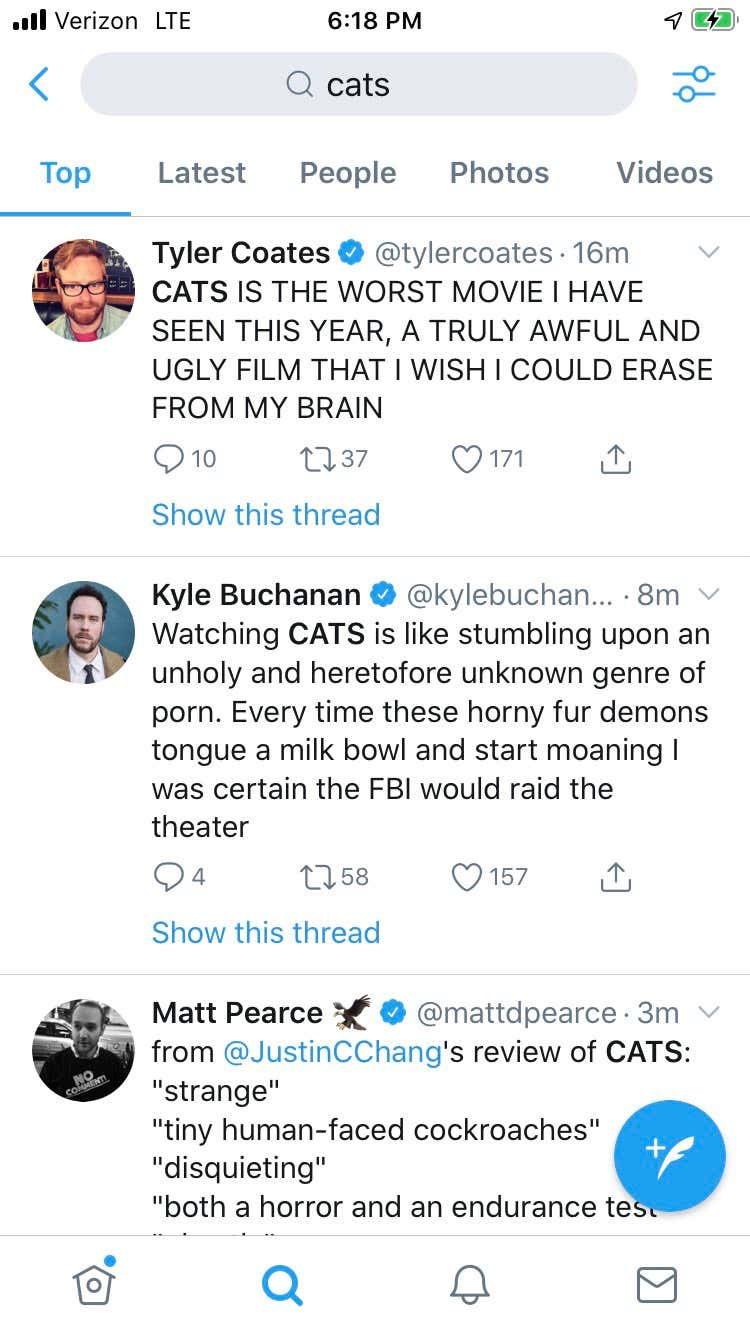 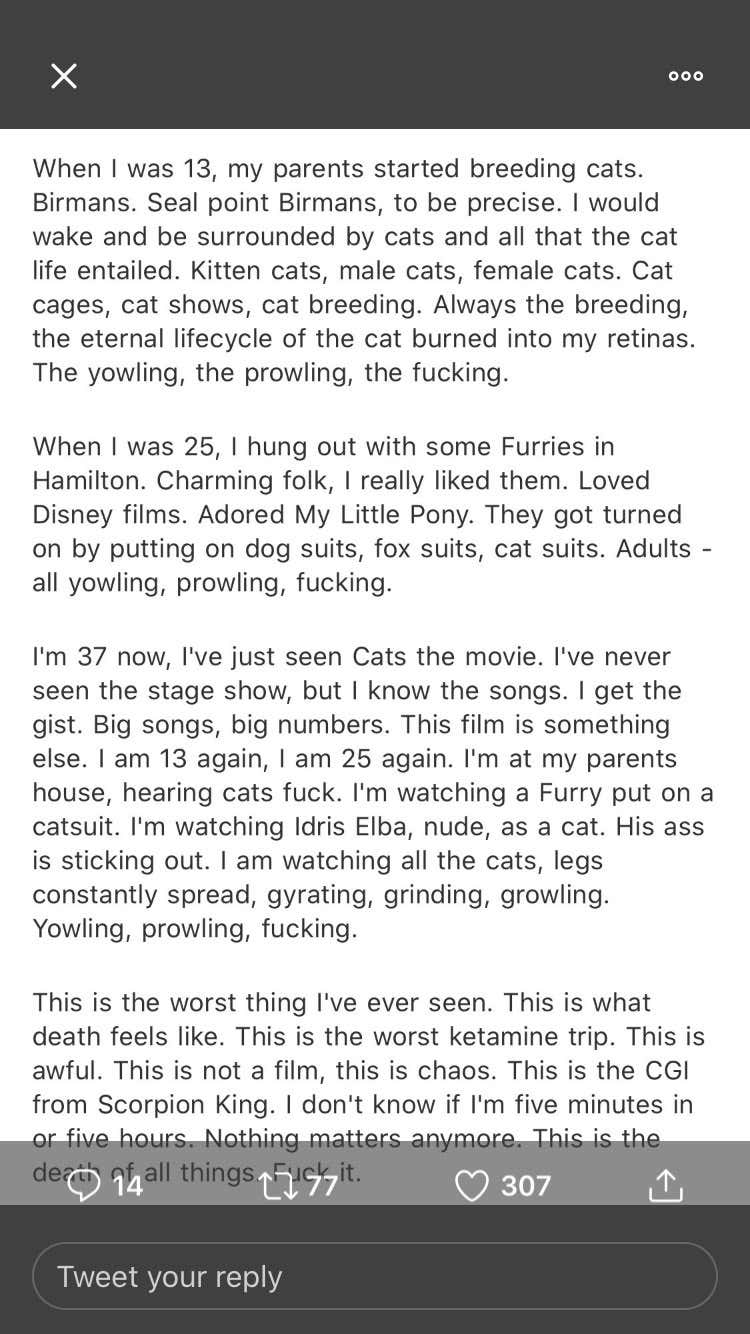 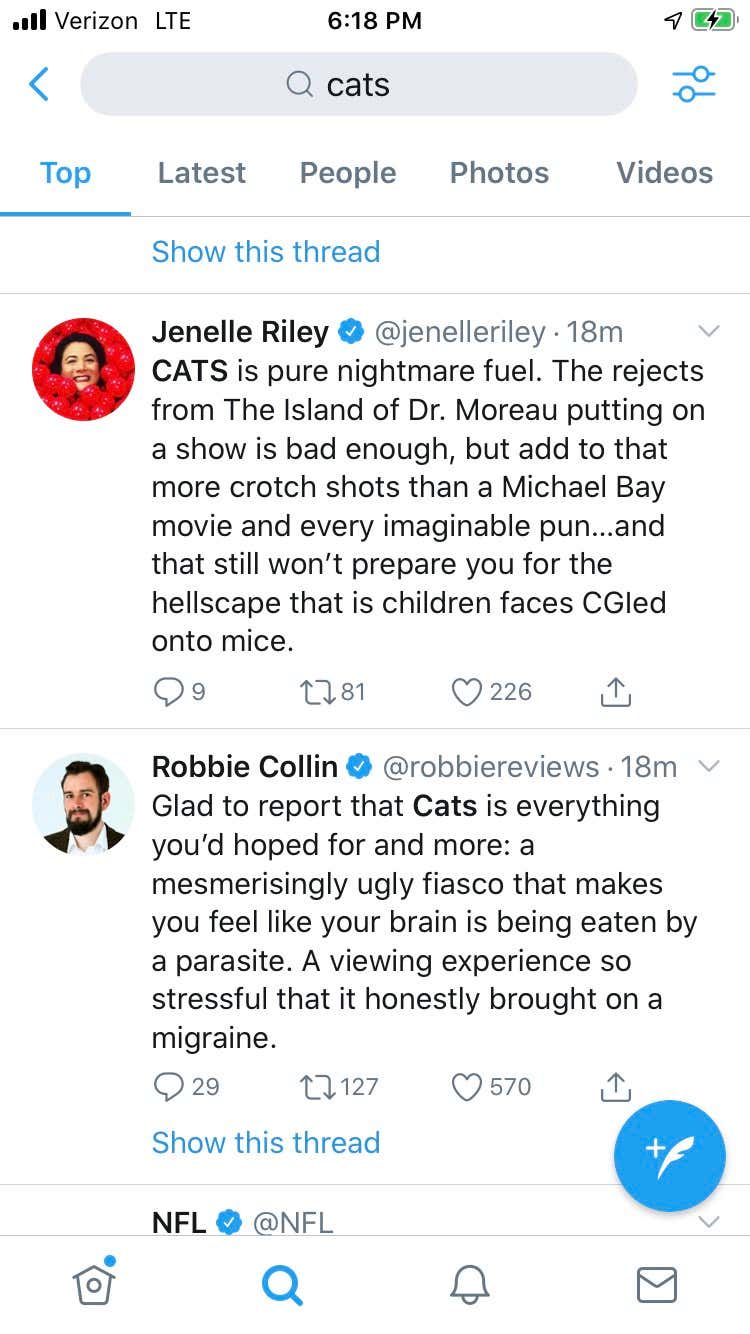 And so you might be thinking, how? Why? You also might be thinking about tying a noose around your neck and kicking a chair out from underneath you. These would all be valid thoughts. How does this monstrosity get made? How does the least appealing idea of all time like this get green lit? On paper, this idea sounds terrible. In real life, it seems rather impossible to create and the final product feels like it’s going to weird, at best. So if you’re wondering why this was ever a thing in the first place, please join me back in, oh, I dunno, 1989, when myself and every other child in New York City was thinking the same thing about CATS on Broadway.
I don’t know if it was strictly a NYC thing, but throughout my childhood in the late 80s and 90s, this commercial was on your TV every two. fucking. seconds:

Logically speaking, it probably was just the NYC area. I’d imagine they were local commercials to promote tickets, but maybe since Broadway is a tourist destination they aired elsewhere. I’m not sure. But if you grew up like I grew up, you were watching Price is Right and Jerry Springer on the couch during a sick day home from school, and you’d see this commercial.

Or you’d be watching the WPIX Feature Presentation, BUT FIRST...CATS!

BAM, cat-humans all up in your TV with the curved glass screen.  Now you gotta understand, I watched this commercial day in, and day out from the time I had cognitive recognition until I was having sex. From age like 5 to fif-fucking-teen I watched this shit. Cats ran on Broadway for THIRTY FIVE YEARS. It had 7,485 performances, closed in the year 2000, and won seven (7) Tony Awards. And it is absolutely unfathomable. I truly, genuinely mean this when I say this:

The success of the show Cats is the most inexplicable story of humankind.

It’s more incomprehensible than the Pyramids of Giza. It’s a bigger mystery than Stonehenge. How did a show about the most polarizing animal in existence gain universal appeal? How did a cast of humans in leotards pretending to be felines become the biggest success in the history of the stage? It’s not Victor Hugo’s Les Miserables, the deeply moving tale of a French man seeking redemption after living a life wrongly imprisoned for a crime he committed only to save his starving sister. Nor was it Phantom of the Opera, the terrifyingly romantic tale of a harrowing man haunting the hallowed halls of an opera house threatening all those who stand in the way of the love of his life? No. No it’s not that musical. Andrew Lloyd Weber wrote both Phantom and Cats and the one about the creepy humans playing homeless alley cats somehow goes on to be the most prolific show in performance history. I mean how the fuck do we allow that to happen? As a society, we are better than Cats. We are better than making it into a feature film 50 years after the fact. I mean are there THAT many fucking cat people around? Was this a social experiment from the bougie Broadway elite where the trolled the tourists of America? I think it’s more plausible that Andrew Lloyd Weber and his Broadway cronies tried to see just how bad of a musical they could make and still convince these fat idiot midwesterners to “come to the Big Apple and take in a Broadway show!” I honestly HOPE that’s the case. Not only do I believe that’s more plausible, but I really hope that’s the explanation. It would restore my faith in society that this was one big social experiment to expose the vapid sheep that are New York City tourists. That’s way easier to swallow than just saying “nope. People find this to be a compelling and interesting tale of dying animals in the streets portrayed by humans in cat costumes.” I mean if the aliens ever come down and are deciding our fate, whether they live in peace amongst us or eradicate us from existence, and they see that we collectively went head over heels for half a century over this fucking show, those aliens will fire up their Independence Day Death Beam so fucking fast and I wouldn’t blame them one bit. I’d welcome it. I’d encourage it.

To this day I think I’m the bitter, skeptical, cynical man I am because of fucking Cats. I swear to god that commercial ruined my life. It definitely ruined my childhood. Innocence lost. I can hear those words in my head on repeat still to this day. “Now and forever at the Wintergarden theater!” And I’m sitting there, probably 7,8,9 years old thinking, for real? This shit goes on “FOREVER?” This is what adults do? This is their idea of entertainment greatness??? I’m busy arguing with my mom trying to get her to let me stay up to watch Superman II:

And the whole time during the argument I’m thinking “this bitch and all the adults in this city fucking like CATS. And they make the rules around here?” My first feelings of rebellion were inspired by this fucking monstrosity. The first time I learned that just because you’re an adult doesn’t mean you’re smarter than me was CATS. Oh yea? I’m just a child? Well your generation of people made this piece of shit play about dead cats the most successful production in the history of human life, so maybe you should shut the fuck up.
And now that we have the movie, a whole new generation gets to experience those feelings of confusion and skepticism. That unsettled feeling where you can help but feel like you’re a pervert for even seeing the commercial. CATS…now and forever making you feel like there must be millions of sex offenders out there propping up this production because it’s the only explanation as to the type of person who would find this entertaining. CATS. The mystery, the wonder…as to how many serial killers and pedophiles are heading to the theaters in droves right now. CATS. Let the memory live again!

Watch KFC Radio every Tuesday and Thursday only on Barstool Gold. In addition to video podcasts, you can watch the Barstool Documentary, Feitelberg’s cartoon series “The 1 Thing I Learned,” all-new bonus episodes of Pardon My Take, KFC Radio & KFC Radio Classic, as well as Skype Rundowns, live video AMAs, and other video content from some of your favorite personalities such as Large and Donnie. As a Barstool Gold Hardcore member, you’ll also receive free shipping in our store, fewer ads, exclusive merch and the chance to take a tour of Barstool HQ. Join the most hardcore Stoolies and subscribe now: barstoolgold.com/kfc