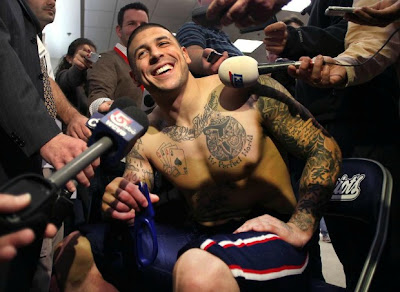 CBS – Aaron Hernandez will be back in the NFL in three or four years. Possibly. “I think (the case) is not only beatable, (but) I think he will be back in the NFL within three or four years,” Rolling Stones contributing editor Paul Solotaroff said on The Doug Gottlieb Show. “I think they’ve grossly overcharged him based on the case they’re building – no direct eye witness, no murder weapon (and) no plausible motive…. His principle nemesis at this point is likely to be the five gun charges levied against him; I think they got him dead to right on most of those,” Solotaroff said. “But as crazy as it sounds, this is a guy with no priors… And if in fact he winds up doing three years behind (bars for) those gun charges – which would be a lot in this case – he’s 26, 27, with very low mileage on those legs of his and a lot of time to heal up. My sources tell me there will be more than one NFL team pursuing him hotly when he walks out of jail in four years.”

Ron Borges on Mike & Mike – “I don’t in any way… and I’ve said this a number of times and tried to make this clear in the story… I don’t think that whatever they knew it would lead you to conclude the guy was gonna get arrested for murder.  So anyone who tries to say Bill Belichick or the Patriots or ownership should have known that he had the potential to be involved in something of this nature… it’s kind of a reach.  The only people responsible for the death of Odin Lloyd are the three people that were standing in that vacant lot at three o’clock in the morning.”

Well well well.  That didn’t take long, did it.  24 hours ago, Terrorist Tiger Beat magazine was promoting the slanted, biased, agenda-driven fiction that the Patriots knew damn well that what kind of a homicidal nutjob Hernandez was and that they practically aided & abetted him.  They basically suggested the flop house in Franklin was all The Hooded One’s idea.  Like they sat around at the Combine in Indy having beers and he said “Aaron killed a guy! You should find yourself a safehouse or a relative close by. Lay low for a while, because you’re probably wanted for murder…” And how no other team in the NFL wanted any part of him and only the Pats were willing to make a deal with this F-receiving devil because they’re such hypocrites.  I mean, you read the obvious Borges-written paragraphs in that story (“stoop-to-conquer”, “while they stiffed Wes Welker”) and he sounds like he’s about to march on Gillette chanting “KRAFT LIED! PEOPLE DIED!”

But nope.  Not today.  Instead, what we get are both writers backpedaling faster than any safety on the Patriots roster.  This Solotaroff clown admitting that Hernandez had no prior record.  And that if he doesn’t do much time, all those teams that claim (after the fact) that they knew all along Hernandez was bad news will be waiting for him outside the prison like Elwood Blues.  And Copy & Paste is admitting that it’s lunacy to think Belichick, Mr. Kraft or anyone else in the organization is culpable.  You can argue that it’s too little, too late. They can’t unring that bell. That not nearly as many people will hear what these guys are saying now as opposed to read the article and the damage is done.  But I won’t pick nits.  I’ll take this as an admission of guilt and move on because I want to be the better man.  So thank you, pro-terrorist writer.  And thank you, Ctrl+C.  Apology accepted. @JerryThornton1