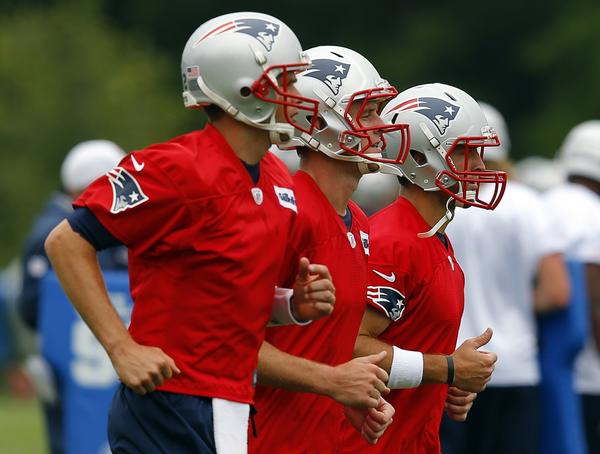 Now that the Great Brady Knee Scare of 2013 is behind us, I’ve got to admit I’m a little stunned at the reaction to it over the last 24 hours.  Not so much about the widespread panic when we thought the worst had happened.  Because believe me, no one was taking it harder than I was.  (I went right into my post-Giants Super Bowls coping mechanism of putting “Jar of Hearts” on constant repeat and cutting myself in the bathtub.)  What I’m having a hard time wrapping my brain around is all this talk about how bad the Pats backup quarterback situation is and how they “need to go out and get someone.”  Talk radio’s been overrun by trolls who suddenly realize that Brady could get hurt and basically accusing the team of neglecting the QB depth chart.  Like shame on them for not having Aaron Rodgers on the bench ready to go if disaster should strike.

Am I just deluding myself, or is addressing the backup quarterback spots exactly what they’ve been doing?  Weren’t the acquisitions of Ryan Mallett and Tim Tebow designed to give them viable options?  Mallett projected as a late 1st/early 2nd round QB prospect.  The reason he fell to them in the 3rd wasn’t because he can’t play, but because he allegedly admitted he smoked pot in school and, frankly, that he came across as kind of a dick.  In fact, here’s a typical prospect profile of him from 2011:

Mallett has the arm strength and size of a franchise NFL quarterback but still needs to continue to develop his accuracy and decision-making consistency. Can drive the ball down field and hit the deep out. When drop mechanics are sound, shows the ability to stick the ball into tiny windows. Has played in pro-style systems and understands reads and progressions but is still prone to taking some risks. Release is natural and over-the-top. Exhibits leadership qualities on the field but front offices will want to further investigate his character and ability to take coaching. Mallett’s a really enticing package and will likely come off the board in round one.

And obviously the jury’s still deliberating on Teoow.  But he’s still a guy who went into Pittsburgh in the playoffs and put up 316 yards on them including a game winning 80 yard TD off the exact same blitz that put Dick LeBeau in the Hall of Fame.  And for what’s worth, Cold, Hard Football Facts has Real QB Rating that determines winners more than 93% of the time.  And by that stat, Tebow was the 14th most efficient QB in football.

Call me naive, but aren’t those exactly the kind of guys you want standing by on your sidelines holding clipboards?  As opposed to some failed retreat like Vince Young (GB) or Kyle Orton (DAL).  Or someone with a proven track record of pure suck like Drew Stanton (AZ)?  Look, I admit I’m a shameless Patriots fanboy, but I’m not stupid.  We can all agree if Brady goes down for any length of time, we’re fucked seven ways from Sunday; it goes without saying.  But you do the best you can with the backups that are available.  There are maybe 20 beings in the universe who can be called legitimate, NFL playoff caliber quarterbacks.  And it’s pure demagougery to claim the Pats are derelict in their duty because they only have one of them.  @JerryThornton1