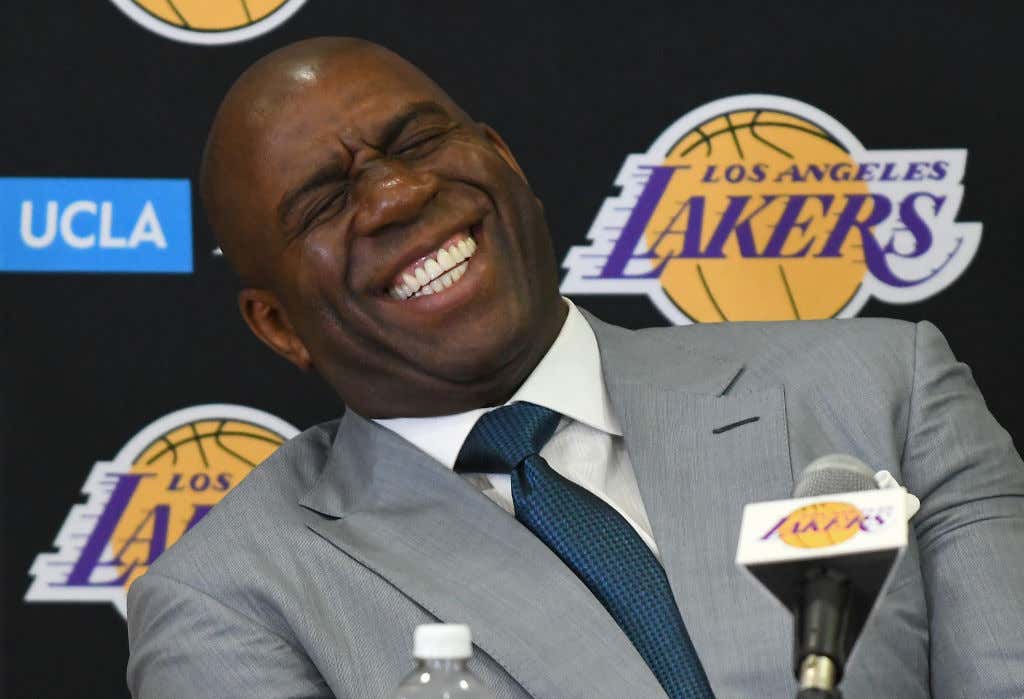 Man do I love how Magic Johnson on Twitter is back in our lives. It just didn't feel right all those years he couldn't tweet while he was instead running the Lakers. We as an internet were deprived of this sort of greatness. Normally when you are talking about MVP candidates you keep it relatively short, maybe you go 5 deep. Magic? That won't work for him, instead he's going to give you a list 3x as long and even cheat by including two players in the same slot. Classic Magic and utterly preposterous. Basically, if you play in the NBA Magic thinks you are an MVP candidate.

Now in terms of the actual list? I'm starting to think Magic hasn't watched any basketball this season. Obviously the top 5 are no brainers, everyone who is giving you an early list of MVP candidates is going to have that group in some shape or form, no real problems there other than Magic being a little bitch and being too afraid to put Luka ahead of Giannis. Just do it Magic you baby. From there though things really spin out of control. Am I going to get upset about how Embiid is higher than Tatum? Not really. But he SURE AS SHIT shouldn't be ahead of Pascal Siakam. You cannot tell me that both Ben Simmons and Kyrie Irving deserve to be that close to the top 10 either. You mean the guy who couldn't have his team anywhere close to .500 and another guy who is having career worsts almost across the board on a team that has underachieved? No chance. Right off the bat what we've seen from KAT and Booker so far this season has been more impressive than both those guys. How do you have Damian Lillard 13th when the Blazers are legit the 2nd worst team in the conference? If we are doing a list of 17 players, how does someone like Brandon Ingram not make the cut when he's been better than a lot of these guys? Where is Kemba Walker? You know the guy averaging 21/4.6/4.7 on the current 2nd seed in the East? Bradley Beal is 4th in the league in scoring and has WSH with a top 5 offense yet he can't crack Magic's top 10?

The best part about Magic is you know he was 100% serious with this list too. I loved how he didn't end with his MVP list either

Does Magic know Jonathan Isaac exists? Maybe even Andrew Wiggins? I can understand the Ingram choice, but is LaVine really all that much improved from what we saw last year? He's actually averaging fewer points (21 vs 23) with lower FG% (42% vs 46%) and is averaging fewer rebounds and assists with a lower Ortg. It's like Magic saw his 49 performance from the other night and that's the only LaVine he's watched all year. He's still a good player don't get me wrong, but he was this good last year. That's not exactly what the Most Improved Player award is for. It's for guys that took their game to another level, and there are a more than a few guys out there you could roll with.

In the end, this is just Magic being Magic and I'll admit, I needed the quick chuckle. It feels great to have Twitter Magic back in our lives because he continues to be the gift that keeps on giving.