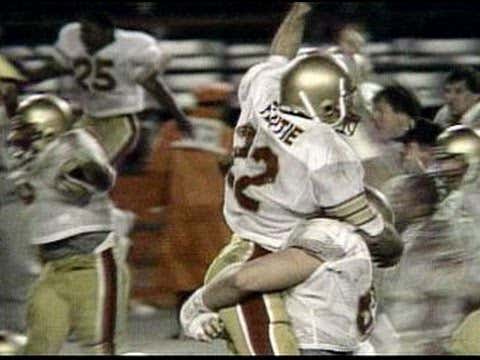 Boston College stuns Miami 47-45 as Doug Flutie connects with Gerard Phelan for a Hail Mary on the final play of the game. The pass went 48 yards and propelled Flutie to win the Heisman Trophy as it became one of the most famous plays in the history of college football. Flutie’s magic helped lift Boston College to a 10-2 record, including a 45-28 win over Houston in the Cotton Bowl.

Doug Flutie was born on October 23, 1962, in Manchester, Massachusetts. At 5’10,” Flutie was written off as too small to play quarterback as he ended up attending Boston College. When Flutie arrived at BC, the Eagles had been a long-dormant program that had not been to a bowl game in four decades. Flutie took BC to consecutive bowl appearances in 1982 and 1983. The Eagles had not been to a bowl game since 1942 before Doug Flutie arrived.

Doug Flutie’s senior season saw him make the Eagles a National Title contender as they were ranked fourth before losing games to West Virginia and Penn State. On the day after Thanksgiving, Boston College was ranked tenth facing Miami, who was 8-3 coming off a National Championship in 1983. The 1984 season was one of frustration for Miami, in their first season with Jimmy Johnson as head coach as they were ranked #12 after blowing a 31-0 lead two weeks earlier against Maryland.

The Nationally Televised game started well for Boston College and coach Jack Bicknell as they jumped out to a 14-0 lead. However, Bernie Kosar leading the way, Miami quickly answered. Back and forth the game went as the Eagles held a 28-21 lead, as Doug Flutie became the first quarterback in NCAA history to top 10,000 yards for his career as he matched Kosar throw for throw, passing for 472 yards with four touchdowns. Kosar meanwhile set a Miami team record by passing for 447 yards.

The game was tied 31-31 at the end of the third quarter, as teams combined for 919 yards through the air. However, it was the running of Melvin Bratton that was keeping Miami in the game. Bratton, who had four scores, gave the Hurricanes a 38-34 lead in the fourth quarter with a big 52-yard run. Boston College would answer on a one-yard dart by Steve Strachan. The Hurricanes, though regained the lead with 28 seconds left was Bratton found the end zone again on a one-yard run.

Down 45-41, Boston College was staring defeat in the face, as they got the ball back with two-time outs at their own 20-yard line. Doug Flutie got BC to midfield, with passes to Troy Stradford and Scott Gieselman. After an incompletion, the Eagles faced one last play from the Miami 48, with six seconds left. The play called 55 flood tip, which called for all BC receivers to head to the end zone. Miami looking to prevent another miracle pressured Flutie, who narrowly avoided a big loss running back to his own 37 when he finally was able to launch the ball. The ball traveled 63 yards against a steady 30mph wind, landing in the arms of Gerard Phelan. The pass touched off an emotional celebration for Boston College, who had a 47-45 victory as Miami watched in stun disbelief.

Doug Flutie had been a Heisman Trophy contender, but hardly the favorite, going against Ohio Stat running back Keith Byars. However, the Hail Flutie play became such a story that the diminutive quarterback from Boston College surged and won the Heisman Trophy a week later. Boston College would go on to finish the season at 10-2, beating Houston in the Cotton Bowl 45-28 on New Year’s Day. It was BC’s first bowl victory since 1940.

Doug Flutie would go on to play in the USFL with the New Jersey Generals. After the USFL folded, he had a brief but unsuccessful NFL career with the Chicago Bears and New England Patriots. After his NFL struggles, Flutie went north to the CFL and became the league’s biggest star winning the league’s Most Outstanding Player Award six times as he led the Calgary Stampeders and Toronto Argonauts to Grey Cup Championships. In 1998, Doug Flutie returned to the NFL and had marginal success with the Buffalo Bills and San Diego Chargers before finishing his career as a backup to Tom Brady on 2005 New England Patriots.

The success of Doug Flutie helped lift Boston College to the National Spotlight, turning them into a stronger program. Many at the time attributed their interest to the Eagles coming from the Hail Flutie. Such growth in programs has become known as the Flutie Effect.