Express- A Doctor has dramatically saved an elderly man’s life mid-flight, after sucking urine from his bladder. The shocking situation was caught on camera, and has quickly gone viral. The incident occurred on a China Southern Airlines plane which departed from China to New York on 19th November. Flight attendants were walking around the plane at around 1:55am to ensure all passengers were comfortable. It was then that the head of the cabin crew was alerted to an elderly passenger in urgent need of medical assistance.

Cabin crew then searched among other passengers for a doctor, and made the man a temporary bed in the crew area. After an announcement, Dr Zhang, a vascular surgeon, rushed to examine the man. He found the man’s bladder was filled with around 1000ml of urine as he was unable to urinate himself. If the urine was not released quickly, the man’s bladder could rupture, leading to potentially fatal consequences. Thinking quickly, Dr Zhang knew he had to drain the urine, so started preparing equipment he needed from what was onboard, including a portable oxygen mask, a syringe needle, a bottled milk straw and tape. He punctured the man’s bladder with the intention of syphoning the urine out, but because cabin space was limited, the syphoning device could not work properly.

He used a tube to suck out 700-800ml of urine, and the man’s condition improved. For the next 37 minutes, the doctor sucked out the urine, spitting it in to a cup, to ensure the man’s bladder was empty.

I don't know if the medical industry gives out awards like Doctor of the Year or anything like that. But if they don't, I'm giving Dr. Zhang the first ever Barstool Sports Doctor of the Year Award. The trophy may resemble a Dunkin' Go2 award and have the name of a Barstool employee engraved on it. But none of that matters because it's the thought that counts. You know why? Because Dr. Zhang didn't give a second thought to sucking tainted piss out of an old man's dick with his lips of life in the name of doctoring.

I know doctors are supposed to be programmed to help people. But I imagine they aren't looking to be on the life-saving clock anytime someone's in pain just like cops don't always want to be enforcing the law whenever someone cries for help, sports bloggers don't always want to be live tweeting their team during a game that runs late, or any other profession that is extremely important to making the world go round. I get disgusted at the mere thought of sucking snot out of my kid's nose with a Nose Freida even though that snot comes out of a human that is literally half me and ends up nowhere near my lips.

Meanwhile Doctor Z (pretty badass nickname, right?) checked out of that mental zone we all go into while flying, chose to admit to the plane full of strangers he was a doctor, and dropped everything he was doing in order to help his fellow man who was in pain 35,000 feet above the ground. Zhang didn't lift all those books in med school to become a human catheter on an airplane for THIRTY SEVEN MINUTES. He did it to get a nice house, maybe buy a boat he will never use, and to make his parents proud. However, when he was called into action out of the blue, he was ready save the day by puncturing a man's bladder using his own two hands and sipping/spitting a Big Slam worth of diseased piss for the love of the doctoring game, which is why he is my choice for Barstool Sports Doctor of the Year.

Care to give an acceptance speech, Doc? 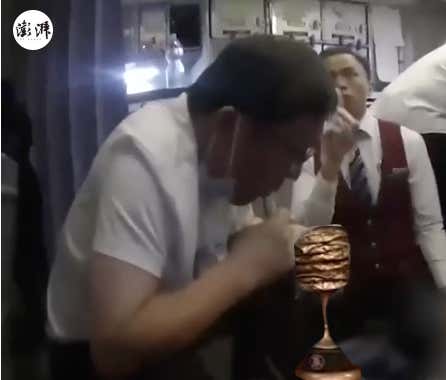 Look at that, no comment from a man that is as humble as he is helpful. I hope the airline gave Dr. Z as many bag of pretzels as he wanted as well as the biggest Tobelrone bar that airport had once they landed for being a true hero (and to get the taste out of his mouth).

P.S. Shout out anyone who remembers the Pepsi Big Slam from back in the day which was a total game changer in the soft drink industry.

UPDATE: It looks like we are going to have a Brave Off!

I don't know how we are going to settle it. But if Chaps wins, he gets Dr. Z's Go2 Doctor of the Year trophy and if Dr. Z wins, he gets Chaps' Purple Heart. Nothing beats a high stakes Brave Off.