Alright I'm not trying to start another war here at Barstool Sports. I've gotten enough smoke this week on the Root Beer Power Rankings to the tune of almost 100 emails correcting my 1-9. On that note I will have a comprehensive follow up to address these concerns later today/early tomorrow. Be patient as there's an excess in volume. For now, I just want to be very clear that I'm not here to ruffle feathers, but rather seek answers. It's my nature.

The question at hand is very straight forward. Is it worse to have never seen the Godfather or to just straight up not like it. And while simple, I expect a broad spectrum of affections. After all, we're just one week out from Godfather SZN on AMC. You can always bank on Corleone-related emotion running high this time of year:

So in that spirit, I think it's only fair we take a look at two polarizing opinions from the overwhelming minority of people that are out on The Godfather.

In One Corner We Have The Pats:

People who don't like it for these kind of reasons:

Personally, I find those to be tragic opinions in the pantheon of movie opinions. But I'm not anyone to judge. I'm a man of the people. I source power through democracy and thus can only say that I disagree. To rule one way or the other - conclusively - I need hard data. Information. Evidence. 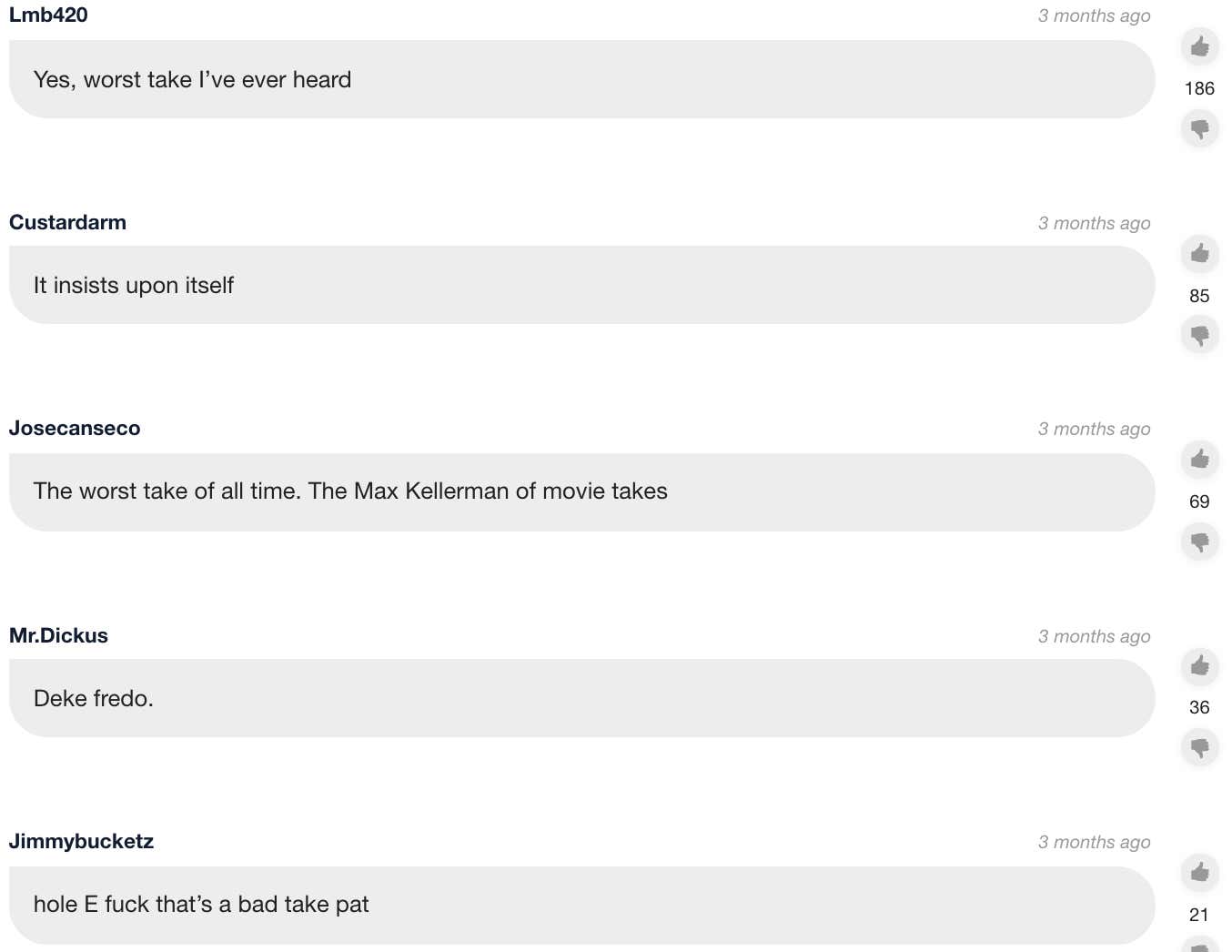 From here, we all get a pretty good idea that not liking the idea Godfather is an objectively bad take. Granted I'm probably not taking home the Pulitzer on investigative reporting but whatever. Let's keep it high level and just store this take in our brain: There are people who don't like the Godfather and that's BAD.

In The Other Corner We Have The Ricos:

People who are busy running one of the longest standing, most electric podcasts in the world. People who want to get to the Godfather but just haven't had the time so it's on the list. People who don't hate it because it would be unjust and unfair to hate something they haven't seen.

Let's also remember that this is a group of honest people. Really think about it - there's an overwhelming social pressure to lie on the spot. Yeah I've seen the Godfathers - great movies and keep the convo moving right to the next topic. No one wants to be That Guy but yet in order to participate in this hypothetical as someone who Hasn't Seen The Godfathers, you need to be That Guy. And it's my well-grounded opinion that such an admission requires overwhelming courage. Especially in the face of inevitable world-class criticism.

No. Of course not. In fact you could argue it's CRAZY to have not seen the Godfathers. Some of the best films every made and quite honestly - life would be a lot easier if it was mandatory like taking the Constitution test in 8th grade. That's just a fact about society as a whole.

But it's also a fact that life would be a lot easier if every lunch came free. If we didn't have to work hard and electric gambling content just fell from the sky. Then maybe everyone would have time to watch the Godfathers and enjoy their collective greatness but unfortunately that isn't the case. Unfortunately the world needs guys like Rico who tirelessly put the needs of others ahead of their own. I guess we'll just have to live with it.

Not ever having watched the Godfathers is a wild move. Borderline crazy. But it's nothing compared to Godfather Snobs. Those assholes are the worst.