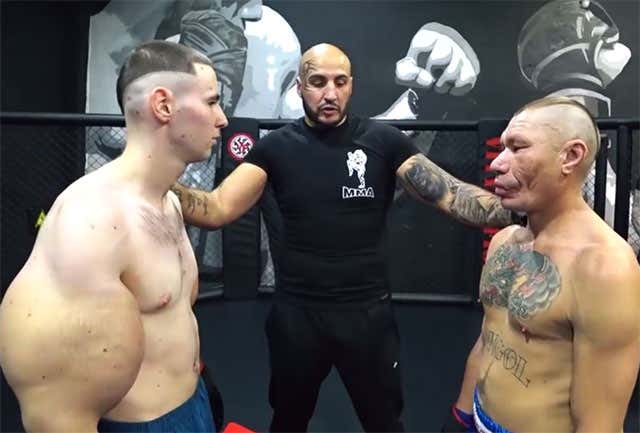 Source - A Russian bodybuilder dubbed “Popeye” for his disproportionately large biceps who nearly died as a result of the poisonous petroleum jelly injections in his arms has taken action to get his body back to normal.

Kirill Tereshin, 23, is recovering from surgery to remove synthol oil and “dead” muscle tissue from his arms. The substance in the bodybuilder’s enormous, 61cm guns caused pain, fever and illness...Surgeon Dmitry Melnikov of Sechenov Moscow State Medical University, who performed Tereshin’s first operation, said he still had about 75 per cent more of the vaseline-like implant to extract, which should take at least three more surgeries.

Wow. Talk about the end of an era. Say what you want about Kirill Tereshin, butt at least the man went for it. He wanted to have hilariously large biceps but he also didn't want to actually work for them. Most people in the world would just chalk that up to a loss, but not Russian Popeye. He wasn't going to let a lack of actual strength prevent him from achieving his dreams. So he loaded up a syringe full of oil, injected that sucker right into his arms, and POOF! The man is carrying around a couple of pythons. Granted, those pythons didn't save him from getting worked in his first MMA match. They also looked...well...awful, to say the least. But he still went for it nevertheless.

And you know what? There are millions of people in the world who never actually go for it. Millions of people in the world who have dreams but never once get to actually live them out and turn them into reality. Russian Popeye went for it. It nearly killed him, as I'm sure you would imagine that loading up your body full of oil would do to a human. But that's besides the point.

So pour one out for a legend tonight. Don't cry because it's over, smile because it happened. We will never forget Russian Popeye.