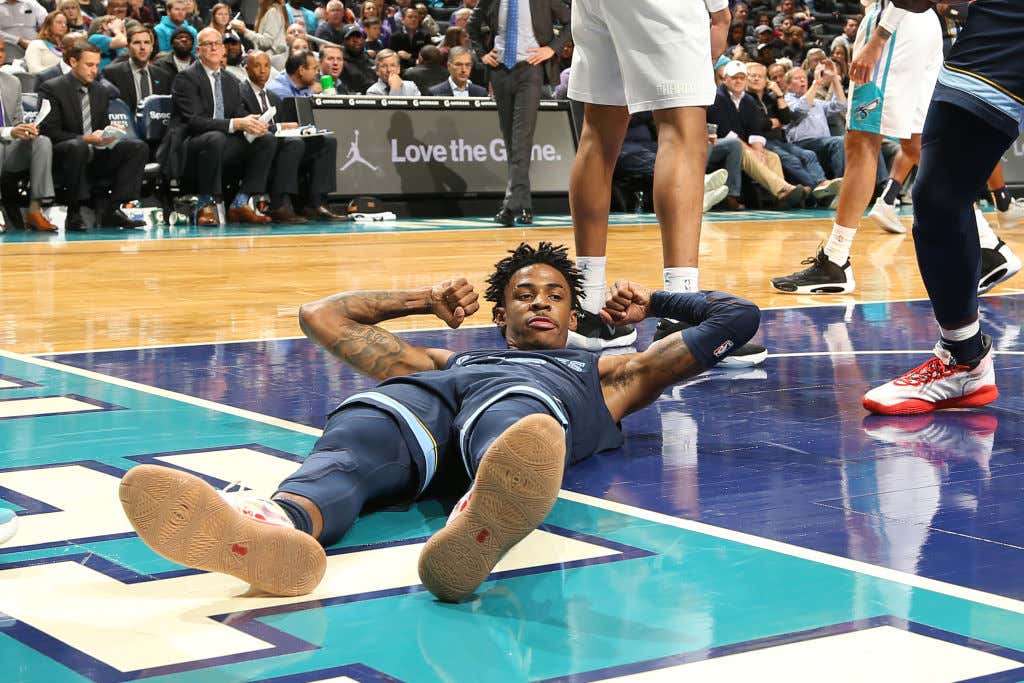 Good morning everybody happy Thursday and welcome to another edition of Last Night In The NBA where we bring you up to speed on everything that went down from the night before in the Association. It was another busy night on the NBA schedule with 7 games and we got a little bit of everything in terms of game winners, upsets, ridiculous offensive performances, Wednesday night pretty much had it all. If for whatever reason you couldn't watch then keep on reading because here's what happened.

OK we've now seen this a few times so far this season, but something is going on with the fourth quarter and the Sixers. They can't stop being terrible in them. You may remember the 13 point performance that led to them blowing a 19 point lead in DEN, well in this one they scored just 15 fourth quarter points to make what was a close game into a blowout. This confuses me because for so many months I was told this team had the most talent in the East and maybe the NBA, and I get they were without Embiid but isn't that why they got Al Horford? What happened to the

"Our only weakness was replacing Embiid with Amir Johnson, now it's Al Horford so this team will never lose"

argument from the summer? Is that dead already? That's too bad. Because the $280M that they spent on Horford/Tobias Harris isn't looking too hot at the moment. You know with the 5-18 from Al and then the 4-13 from Harris. Another 0-3 night from three for him, did you know he's 0 for his last 23 from deep? For that price? Gross.

But hey, Simmons looks like his shoulder isn't an issue so that's good

but as a team they shot just 8-30 from three, turned it over 15 times and like I said, ran out of gas in the most important 12 minutes. Now 3-4 away from home, the Sixers are learning it's not as easy when you have real expectations now is it.

For ORL, a big win for them as they try and just get back to being a .500 team, and this reminded me more of what we saw last year when they were playing all the contenders tough. A big from from their frontcourt was exactly what they needed with Embiid out

because the Sixers had no answer for either of those guys defensively. This really was a revenge game for ORL because half their roster seems to be former Sixers, and you combine efficient starter play with getting actual production from the second unit and it's no surprise they pulled this out. They showed PHI what real defense looks like when it matters most and why they have one of the league's best, because in the end it was defense that earned them this great win.

Who knows how many positive moments the Grizzlies might have this season but I'll tell you what, Ja Morant is going to make sure there are a couple. That dude is special and it was a big night for him that included his first ever NBA game winner

he has to be running away with ROY right now right? Some of the shots he made in that game were absolutely ridiculous, he was an efficient 10-15, clutch down the stretch, pretty much everything you could want from your franchise point guard.

Now he had some help

but the story here was Morant. Surprisingly this was an entertaining game the whole way through, it stayed close pretty much until the final shot and despite the 22 TOs for MEM the 53/48% splits with 17 3PM proved to be enough. Say what you want but this team plays hard.

For CHA, you're happy you finally got a huge night from Terry Rozier, that's sort of what you paid for this summer

What a surprise he's been and absolutely a candidate for MIP. What surprised me most though was the fact that Malik Monk actually showed a pulse. You almost forget he's on this team because they never use him, but he had a solid 20 off the bench in this one

Not exactly the best look to give up 119 at home and lose at the buzzer, but whatever at least CHA was competitive in what will soon be a tanking season.

We'll be talking about the best team in the NBA in their own blog so let's focus now on the Wizards. Not exactly a hot take, but holy shit is Bradley Beal a monster. Every single time he had the ball I was convinced he was going to score and for the most part that's what happened

whether it's his outside shooting or his ability to get to and finish at the rim, Beal is a stud in every sense of the word.

But you know who is also really good for this team? Rui Hachimura. People thought WSH reached when they took him this summer, but I dunno I think this dude is going to be legit as hell. He moves great for his size and he gave the Celts all sorts of problems

And of course, how could I not mention the return of Isaiah Thomas. First time back at the Garden as an NBA starter and he looked just like his old self

It had my brain in a pretzel all night, but man am I happy to see him back and getting buckets.

Thankfully the Wizards decided to play even less defense than the Celtics, and this is certainly not a one time thing for them. Remember when they gave up like 150 in regulation to the Rockets? Scott Brooks may want to figure that shit out.

This was an important game for the psyche of the Rockets. Without Eric Gordon for about 6 weeks due to knee surgery, a head to head matchup with the team many are picking to finish ahead of you in the West at home is one you have to snag. This is when they needed their MVP to step up and carry them and guess what he did?

it's almost as if Patrick Beverley didn't exist. They didn't even get that big a night from Westbrook who only had 17 on 6-20 shooting, and they certainly didn't get anything from their bench who only had 12 combined points, so really it was James Harden by himself. You beat the Clippers that way and that's impressive no doubt about it. They jumped out to a huge lead early and never really looked back, FINALLY showing some life on the defensive end. That's always going to be the key to their success, they need to get back to that defensive level we saw a couple seasons ago.

For LAC, sort of the same story here. It was basically Kawhi and nobody else for the starters

he took 24 shots, no other starter took 10 and nobody else finished in double figures. For their awesome second unit they got a 2-12 from Harrell which is tough, and while Lou Williams had his 20

it wasn't that same dominant second unit performance we're used to. The good news is George is about to come back, but remember every H2H matchup between these two is important when we get to seeding come the Spring, and the Clips are just 1-3 on the season. Doc got tossed and they were without Shamet who's hurt, but that's no excuse if the Clippers truly are supposed to be the best of the West.

Now this looks like the Spurs team I remember from a year ago that just couldn't win on the road. Sure LMA and DeRozan combined for 50 which is nice

but they also combined for a -32 which is not so great. Also not great was the 3-17 performance from three and the whole giving up 129 points thing but you probably knew that. Back to back 40 point quarters is not something you see the Spurs give up a whole lot but it just goes to show how much work they have to do on that end. This team's defense is terrible, and they don't have the offensive firepower to hang around the top 8 if they can't defend.

For MIN, we may just have to accept the reality that Andrew Wiggins might be good now. He's only 24 so it was always possible this might happen, we just had no reason to think it ever would. Well, he's been rock solid

him and KAT combined for 58 of their 129 and KAT even defended himself against Rudy Gay who clearly called him a pussy or something so you love to see that as a MIN fan. I'm also intrigued by Culver now in the starting lineup

and look the Timberwolves somehow keep winning games and there's nothing wrong with being 7-4 in this conference. If they tighten up defensively why couldn't this team be a pain in the ass all year long and maybe squeak in the 8 spot.

We all knew this was the result we were going to get, we all know the Warriors are going to be the worst team in the league so let's not pick on them. DLo had 21 against his former team so that was cool

and Eric Paschall continues to play well for them

but that's pretty much where the positivity ends. We can move on.

For LAL, with AD getting a rest day someone was going to have to step up and help LeBron who only played 26 minutes

and that player was Kyle Kuzma who tossed up his second really strong showing in a row. Now that he's back if he can continue to be a legit shooter like he's shown so far, that's going to be huge for the Lakers moving forward

now obviously it's GS so you take everything with a grain of salt, but the good teams don't lose to bad teams on what could be trap games so give the Lakers credit there. Whether you want to accept it or not the rest of their November is filled with teams like this, so there's a real chance for them to get some separation from everyone else in the West. This is important because they can find ways to rest their stars and not lose any ground. That's important.

I know it's still early, but we may be reaching a disaster situation here in POR. Now 1-4 at home, they've lost 6 of their last 7 and they can't survive if Dame is going to go 2-12. Even with Rodney Hood showing out

this team just can't seem to find a way to win. They blew their early first quarter lead and then the wheels fell off defensively and before you knew it, it was a wrap. Their lack of wings really hurt them in this one as Siakam tore them apart, and we could see this team make a panic trade pretty soon if things truly start to slip away from them. The West is too stacked.

For TOR, I mean Siakam is a fucking beast

and you combine that with FVV's huge night

and that's essentially all they needed. Couldn't even tell they were missing two key rotation players and for anyone who thought TOR was going to disappear now that Kahwi is gone well the joke is on you. This team is still very good, they can absolutely compete in the East and they will forever be a bitch to play.

And that's it! You're now all caught up with everything that went down last night in the NBA. We're back tonight with 6 more games on the schedule and if you can't watch you know the drill. Have a great Thursday!