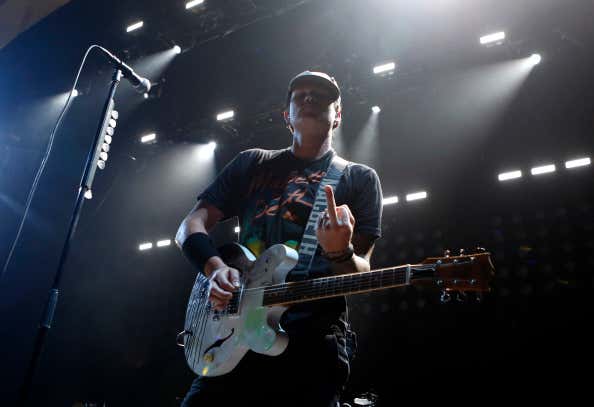 Tom DeLonge To The Haters That Said He Was Crazy

(Source)–Now, the Army has joined the extraterrestrial fray in a big way, inking a contract with DeLonge’s TTSA to collaborate in the study of “exotic” metals that both parties hope will lead to the development of advanced technologies.

As part of the agreement, the Army’s Ground Vehicle System Center and Ground Vehicle Survivability and Protection component will lend research resources, including laboratories, to TTSA, which in turn will leverage what the company asserts are alien metals capable of enhancing the effectiveness of Army vehicles.

To the Stars claims to have “acquired, designed, or produced” these materials, which can offer an array of futuristic modifications like active camouflage, beamed energy propulsion, inertial mass reduction, and quantum communication.

I don’t know why, but I always kind of dismissed Tom DeLonge when it came to the overall alien discussion. Not dismissing him as if to say that he was wrong or crazy, but like…he’s the same as me or anyone else. I don’t care if you are front man rockstar, nobody knows more or less about aliens than anyone else. We are just out here arguing and screaming about the government and fermi paradoxes and making loose amounts of sense without any actual proof. Quite frankly I didn’t like how he was kind of like the “lead alien hunter” as if he’s watched more Ancient Aliens than people like me. Turns out…I was very wrong. So wrong that the US Army has decided to start working with Tom Delonge and his company “TTSA” to the tune of $775k over 5 years. I can promise you that the government hasn’t offered me that much money so as far as I am concerned DeLonge is now #1. Talk about a guy living the absolute dream. If I could do anything in the world for a living it’d probably be talking to weird people, working in hockey somehow, and searching for aliens. Barstool allows me to do two of the three, but Chernin hasn’t pumped in alien hunting level funding yet. Tom DeLonge gets to do everything he wants pretty much and fucking crushes them all. Good for him.

I am a little disappointed that the Army is only interested in using and/or acquiring metals that offer “active comouflage, beamed energy propulsion, inertial mass reduction, and quantim communication” and aren’t going to be actively searching for the Aliens. I thought that the Navy announcing that they are in heavy on aliens/UFOs would mean that the Army would try to catch up, but so far they’re only interested in alien tech that will allow them to destroy things currently living on Earth. That’s a shame. Needs to be an all-hands-on-deck situation at this point since they’re buzzing our tower like every day.