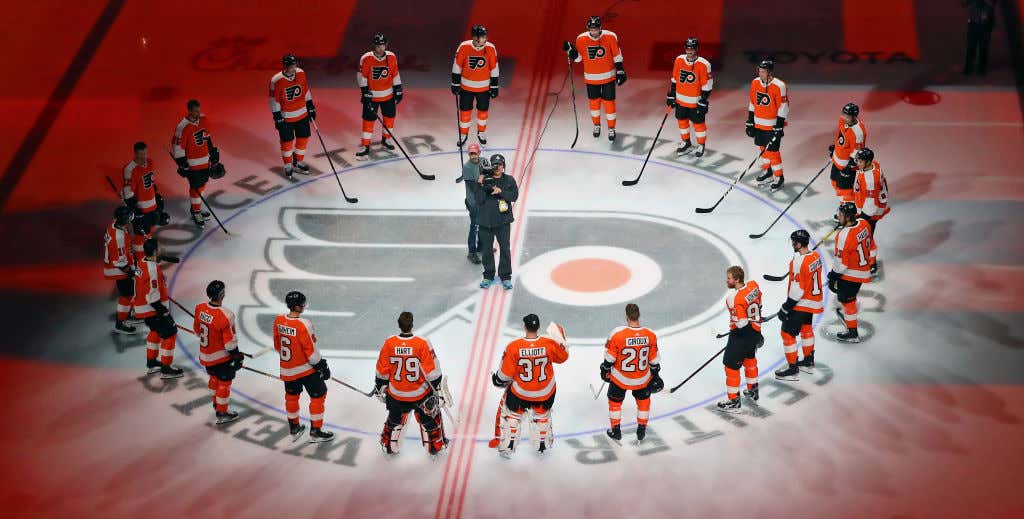 If you watched even just a few minutes of any Flyers preseason game, you were probably expecting this team to get off to a pretty slow start. Which would be expected when you have pretty much a whole new team just starting to play with each other. A new coaching staff, a GM in his first full year, a couple of big acquisitions via trades and free agency, and a 21-year-old franchise goaltender playing in his first full NHL season. The core of this team is still the same as its been for the past couple of years but other than that, this is a brand new Flyers team. And what we saw in the preseason was a team that was still taking some time to get used to a new system, getting used to playing with new players, and a head coach still trying to figure out exactly what he has with this lineup. You knew that the team on paper looks like a legitimate playoff squad, but that it would just take them a little longer to find all the right combinations.

Turns out this team is just a bunch of ballers and they said fuck it, we’ll do it live. Because for the first time since 2011-12, the Philadelphia Flyers have won back-to-back games to start off the season. And it’s not just that they’ve won these first two games of the year, but it’s how they’ve done it. That is 120 minutes of hockey in the books already and I can only think of maybe 8 or 9 total minutes so far where they Flyers didn’t look like they were in control. Hell, they had this game last night wrapped up before it even started.

This team is aggressive on the forecheck, work their asses off below the goal line, make it a bitch for teams trying to go through the neutral zone, are aggressive in their own zone, and then have a certified stud between the pipes. I know that it’s only been 2 games so far but this team looks damn good at every single area of the ice. So turn down the lights, maybe get a few candles going and let’s get into this one.

The Boys Are Buzzin’ On The Forecheck

Okay so obviously this goal from last night was more of jimbo from the Devils than anything, but this is what happens when you forecheck like your dick is on fire all night. You eventually get rewarded with dunks like this one because you just wear down your opponent so much that they surrender with 8 minutes still left on the clock. So TK was the one who got the payoff here (3G, 2A in 2 games, nottabigdeal), but this was a full team effort. Every time the puck is loose, it seems like the Flyers are there. Every time the puck ends up below the goal line, it seems like the Flyers are there. And even when it doesn’t end up in the back of the net, that forecheck makes it a bitch for the other team to break out of their zone cleanly. If they don’t breakout cleanly, they’re going to be a mess through the neutral zone. If somehow they still get it through the neutral zone, they’re not going to be entering the offensive zone cleanly. And if they’re panicking to get through the neutral zone, you end up with little 115 lb Jack Hughes thinking he can split the D without getting eaten alive, turns the puck over and it goes the other way.

The forecheck sets the tone for everything and if they can stay that aggressive all season long, the Flyers are going to be an absolute bitch to play against.

The Penalty Kill Is Officially Back 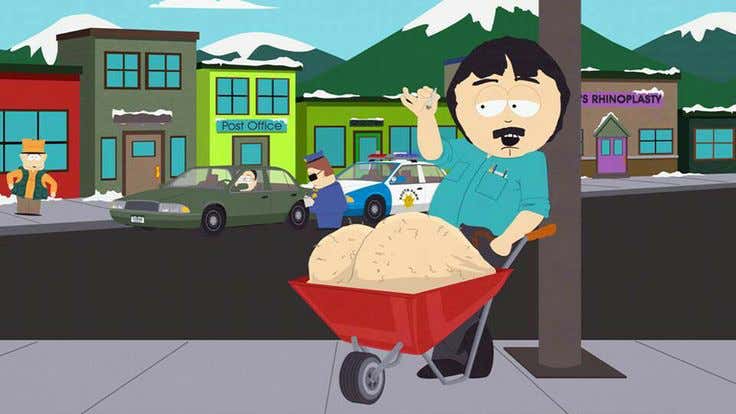 Obviously Carter Hart is a huge reason why the Flyers were able to kill off all 5 penalties last night (that included two separate 5v3’s), but it’s the entire unit out there finally starting to bring back the penalty kill that the Flyers were known for during the Mike Richards era. I think a huge issue the Flyers have had over the past few years is just that they were never comfortable with what they had between the pipes when they were killing penalties. They’d be too afraid to get aggressive on the PK because they couldn’t trust their goalie to bail them out if they gave up a good look. But now that they have a wall in net, these guys are flying around on the penalty kill. And if it seems like we’re only halfway through this blog and I’ve already used the word “aggressive” a ton here, it’s because that’s just the style of hockey these guys have been playing so far. They take chances to make things uncomfortable for their opponents and it’s been paying off here early.

I’m not an idiot. I know that the time is going to come this season when Ovi absolutely rifles one from his office on the powerplay. I’m sure that Subban will put one away on the powerplay one of these next few times the Flyers play the Devils. But I have a feeling that the Flyers are going to be killing off a helluva lot more 5v3 penalties than giving up goals on those powerplays, because it’s big balls by everybody. And the momentum swing you get after killing off a 5v3 is just as huge as a goal. Which is why it was no surprise that the Flyers came out and scored 2 goals in the opening minute of the 3rd period after this big balls kill.

Kevin Hayes gets his first tuck as a Philadelphia Flyer, which is huge because he was looking like one of the best players out on the ice through those first 2 periods but was just getting unlucky. But now that he got that first goal off his back, he doesn’t have to think about it anymore. He can just focus on being the absolute horse that he is and generating a ton of chances without having that snakebitten feeling marinating on his mind. For some reason there seemed to be a decent amount of Flyers fans out there who were ready to turn on Kevin Hayes already because they felt like the Flyers overpaid for him. I have a feeling that 100% of Flyers fans are going to be ready to start paying him out of their own pockets as this season goes along because I think this is going to be a career year for him. He’s had some decent teammates before but he’s never been on a line as stacked as having Giroux and Voracek as his wingers. And considering the Couturier line is typically going to draw the tougher matchup, it’s only a matter of time before that Flyers top line pumps pucks in the back of the net on a nightly occurrence.

Speaking Of The Couturier Line…

Have you ever realized that every year you end up thinking to yourself that the Flyers’ “best” line always has Sean Couturier in the middle? It may not always be the top line on paper–sometimes it is, sometimes it isn’t–but Sean Couturier is always leading the line that is controlling the game. Granted, the combo of Lindblom and Konecny has been incredible so far to start the season. But you could still put anyone on those wings and it would be an above-average line. Outside of Carter Hart, I’d say that Coots is the most important player on this team. I mean aside from a few rushes and powerplays, they were able to keep the Hall – Hischier – Gusev line pinned in their own zone pretty much the whole night. And that’s just what Sean Couturier does. He constantly wins matchups against the opposing team’s top line, so much so that you almost forget that their top line even showed up that night. Hall had 5 shots on the night but most of those came on the powerplay. Gusev only had 1 shot and I don’t even remember Hischier touching the puck last night. Then add in the fact that this line put in 2 goals at 5v5 and they were also out there for the Provorov powerplay piss missile?

Well that’s just complete and total domination. Also great to see Provy get that first goal of the season. He still looks like he’s a little unsure with the puck on his stick but that goal definitely looked like it gave him a confidence boost.

I already wrote two blogs about Carter Hart last night. He deserved more but I didn’t want to completely flood the main page. But yeah, you can read all about Carter Hart’s historic night right here and here.

Same thing I said about Hayes and Provorov though, it is huuuuge to get that first shutout out of the way so early in the season. If you were listening to the NBCSN broadcast last night, you heard how hard they were trying to dance around talking about potentially getting his first shutout without actually using the word “shutout”. From everything we’ve seen and heard, Carter Hart is as mentally strong as they come so I don’t think that he would necessarily believe in jinxes like that, but now we never have to worry about it again. Just get ready to see plenty more of those.

Definitely weird to see Simmer out there in a Devils sweater last night, but now the band-aid has been ripped off. I’ll always love Wayne. He’ll always be a fan favorite here in Philly. Like JvR said, he personified what it meant to be a Flyer. But unfortunately all great things come to an end at some point and Wayne Simmonds is no longer a Philadelphia Flyer. Last night stung but now we can all move on. I have to admit though, I’m not a huge fan of this quote.

I get it. And it sucks because he was so underpaid in that last contract he signed with the Flyers. He’s absolutely right that he put everything he had into this organization and I’m sure that he was hoping that being underpaid for so long would help convince the Flyers to throw an offer out there to him. But as much as this hurts to say, there’s just no way that Wayne Simmonds helps this team right now. I mean he’s left a lasting legacy on this organization and you’ll see guys like Travis Konecny carrying on that legacy for years to come. So in that sense, he absolutely helps this team. But to physically have him in the lineup? When there is already so much competition for that 3RW spot? It just wouldn’t make any sense. Especially considering the Flyers needed that cap space for guys like Hayes, Provorov and Konecny. So as much as we all love Wayne, it’s a business. And bringing him back just wasn’t going to be good for business.

From the bottom on my heart, I feel terrible for Frank and the other 16 New Jersey Devils fans out there. They deserve so much more. I mean all they have is three 1st overall picks on their team. I just wish that someone could help them out.

3-game West Coast road trip coming up now for the Flyers. Vancouver on Saturday (10pm), Calgary on Tuesday (9pm) and Edmonton on Wednesday (9:30pm). It’s a tough stretch but as long as they don’t come back home without at least one win, I’ll still feel pretty confident in this team being for real. I have a feeling we’ll be seeing a 4-1 team back in Philly for the Dallas game next Saturday.