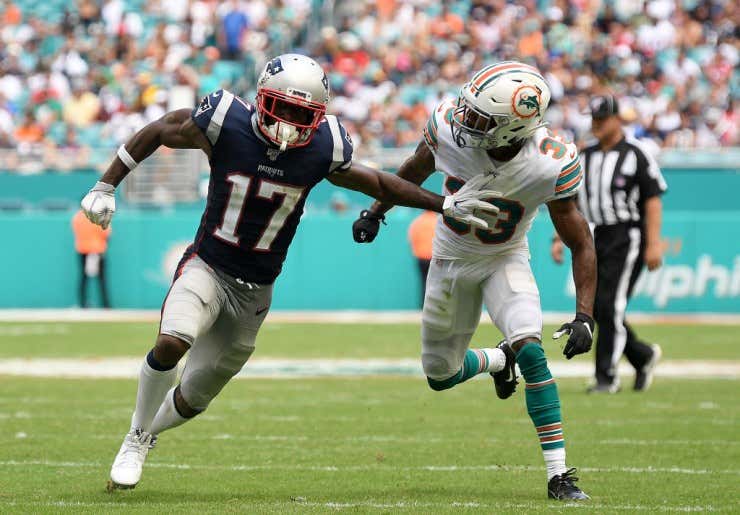 Ian Rapoport – The New England Patriots moved on from Antonio Brown Friday afternoon, unceremoniously releasing him after just one game. …

The decision to release Brown was led by owner Robert Kraft, sources say, sparked by the text messages that came to light Friday and by the thought that the end was not near. Several players privately voiced their displeasure that the move was made, as Brown had made a positive impression on teammates in a short time. He did things in practice no one else could do.

So here it is. The next great overhyped Patriots controversy. Antonio Brown is such an agent of chaos that even when he’s gone in a week and a half he can leave turmoil in his wake. Make that “was” an agent of chaos:

Yeah, best of luck in medical school or your new career as a college professor or whatever field you get into, AB. Enjoy your new life of no guaranteed money and where you’re held accountable for the things you say and do. But I digress.

Trust me, this is going to be THE storyline around the Patriots for the foreseeable future. For a few weeks at least. The next phony baloney narrative is that the players are livid. The quarterback is disgruntled they took his weapon away, after 10 days of working with the guy and letting him into his home where they built pillow forts and stayed up all night telling ghost stories and making waffles in the morning. The coach has had enough of being fed up with being sick and tired of the owner’s constant meddling. The franchise is in utter disarray. Mr. Kraft has a full blown mutiny on his hands. Project Mayhem is in full swing at One Patriots Place right now. The franchise lost its soul signing this guy, they finally went one step too far, and the jenga tower of the Dynasty is about to come crashing down. Stay on the line, callers. We’ve got this sports flash and then we’ll get right to your calls.

I don’t doubt Rapoport on this. I have no doubt “several players voiced their displeasure.” That’s human nature. You see a guy who can do things in practice no one else can do and you want to continue to see him do those things. It’s not their jobs to care if he’s an unstable kook who can’t be trusted too keep himself off the Exempt list. It’s not their $5 million guaranteed Brown would get paid if he was still on the roster Monday. If I had a co-worker who made my job easier while increasing sales and putting more bonus money in my pocket, hell yeah I’d want that guy on staff and I wouldn’t burn a single calorie worrying about how he gets along with is exes.

But there’s a huge difference between “voicing displeasure” and the way this will be spun into an all out insurrection. This team has watched a lot more important players than this crackpot sent packing. Leaders. Team captains. Guys they had emotional attachments with. Strong locker room presences. Universally respected veterans who’d won multiple rings. Lawyer Milloy. Ty Law. Richard Seymour. Mike Vrabel. Logan Mankins. Vince Wilfork. And it’s not only survived, it’s thrived. Any notion that somehow this irrational, self-obsessed, solipsistic imbecile who can’t be relied on to NOT text someone accusing him of harassing her is the one they did the goodbye scene from
“ET” with is patently ridiculous. But that doesn’t mean we’re not about to be force fed it for the next month or so. Especially if they beat the Jets by less than four touchdowns.

At some point the focus of the best team in football will actually be on how good they are at football. But it will not be this week.