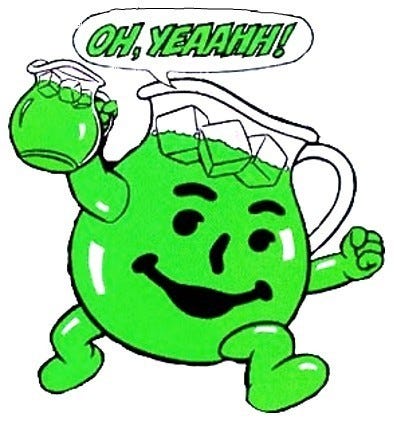 Source – The thieves cased the area around the McGregor Mountain foothills, on the hunt for vehicles with unlocked doors – which helps you open them if you don’t have opposable thumbs and you are also a bear. …

On Saturday, one bear tried its luck in a home in Estes Park, attracted to the scent of trash in the area, the town’s police department said in a statement. After the bear got into the house, officers were dispatched to respond.

The bear was not having that. It turned tail and ran when officers arrived, paying no mind to a wall blocking its way. The bear “forcibly breached a hole in the wall like the ‘Kool-Aid Man,’ and made its escape,” the department said on Facebook. …

Bears are so good at breaking into things that six grizzlies outside Yellowstone National Park became professional product testers, mauling containers to evaluate if they can be certified “bear resistant.”

The area has seen recent bear-related home invasions and high-profile car break-ins. In 2017, a bear to the southwest in Vail opened a kitchen window, wandered around the house and stomped its paws on a piano.

Congratulations, human race. You’ve now encroached so far into the territory of these mauling, razor-clawed, carnivorous, 2-ton murder Wookiees that they’ve figured out everything we do to protect us. They know how to open doors like Velociraptors, open windows, play pianos and find the soft spots in our dwellings to Kool-Aid Man they’re way to a clean getaway.

Living in cities wasn’t good enough for you. Building all-human enclaves where we only had to worry about each other breaking in and stealing shit didn’t work. Some of you people had to go traipsing off into the wilderness to commune with nature and make the forest your home. You probably thought the bears were even cute. Like some Muppet or cartoon character that talks and wears a hat. And all the while these furry woodland sharks were watching you. Learning your ways. Probably even watching Kool-Aid ads on your TV. And figuring out how to kill us in our own homes.

Nice going, hippies. When we find you sliced to ribbons in your bed with all the contents of your refrigerator and kitchen cabinets missing and a giant Kool-Aid Man-shaped hole in your drywall, don’t expect any sympathy from me. The bears are just doing bear things. You’re the ones to blame for showing them how it’s done.