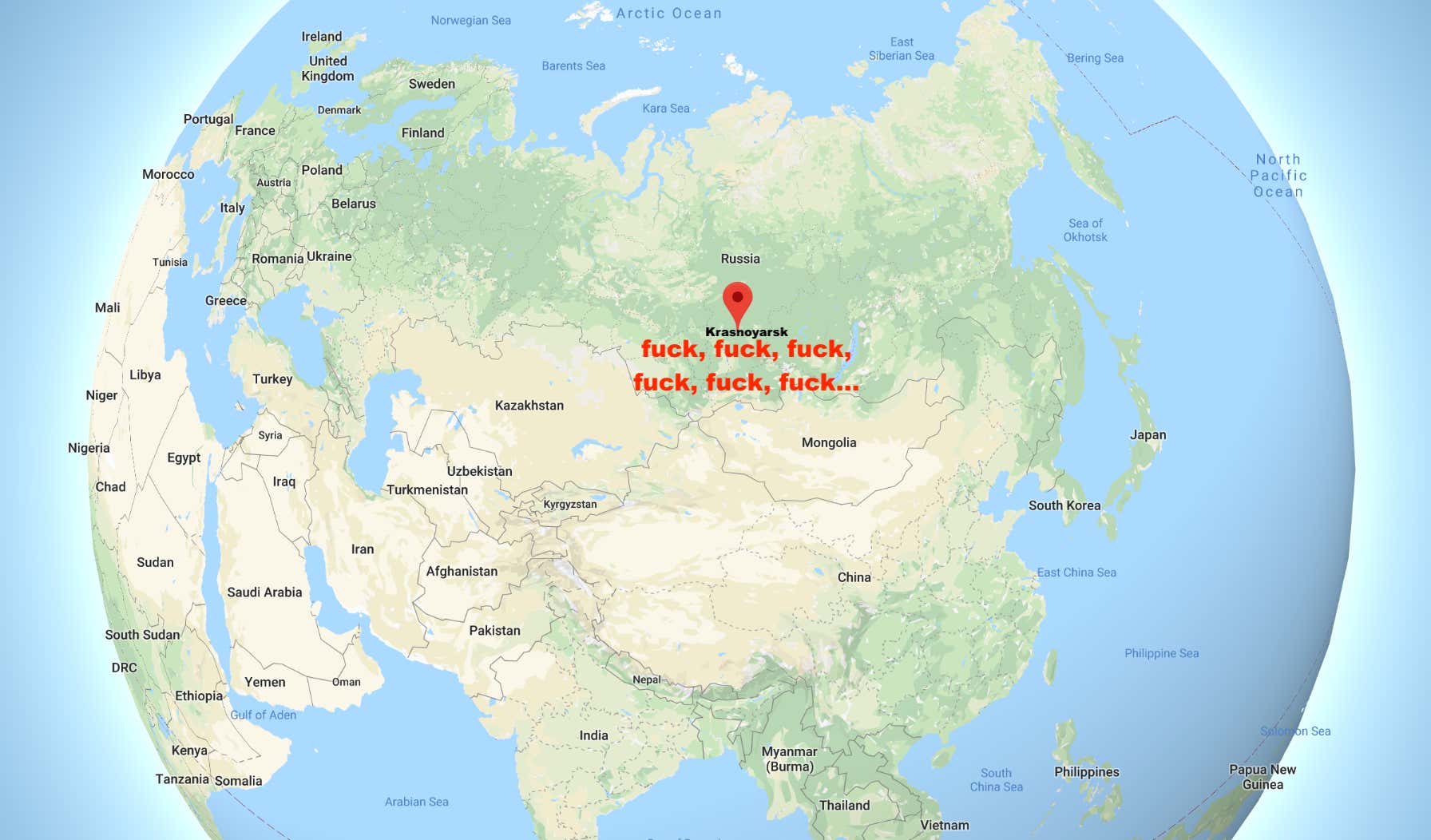 If you watch that with the sound on, the explosion happens at 00:03, but you don’t hear it until 00:14 where it still rocks the camera as the blast finally hits. (Yes, Kate, that’s how sound travel works.) (Ok, well whatever guys, that part was exciting to me.)

From the Financial Times:

An explosion at a Russian military depot in Siberia has injured at least four, forced thousands to evacuate their homes and shuttered a nearby aluminium plant.

The blast ripped through an artillery storage base close to the town of Achinsk in the Krasnoyarsk region, showering shrapnel across kilometres of forest and smashing windows in nearby villages, witnesses and officials told state-run Russian news agencies.

Amateur videos of the blast shot from a distance show a large yellow fireball bursting up above the tree line. The surrounding area appears to be on fire.

Authorities have evacuated around 3,000 people out of 6,000 to be relocated from a 20km radius around the site, which contains thousands of artillery shells. At least four people have been hospitalised, according to TASS and Ria Novosti.

Achinsk, a town of 110,000 people, is preparing for an evacuation, the mayor told local media.

When I was in the Marines one of my side gigs was being an explosives driver. You go through a course of mandatory PowerPoints on the rules, & then watch a ton YouTube videos detailing explosions caused by people who did not follow the rules, plus you learn the codes & safety precautions for hauling munitions & explosives on the road, and then you get an extra little license card and get to tell people you’re an Explosives Driver which sounds much cooler than it actually is.

When it’s time for your unit to go to a range, you’re the one who takes the Humvee over to the ASP (Ammo Supply Point) & loads up on whatever you guys are firing off that day. These areas are like highly guarded mini-bases within the bases, and I remember rolling my eyes at how seriously it was taken sometimes…

They’d check your vehicle for every little detail, and if so much as a blinker or windshield wiper wasn’t working you weren’t allowed to pick up the ammo. They’d make you drive all the way back to where you came from & get it fixed or get a new vehicle.. meanwhile, your whole unit could be waiting around for you at a range somewhere.

And say your pickup was 5.56 rounds, every single one had to be accounted for before & after, and if you were off by even one it was a big deal. No rest until it was found or sorted out. On top of that, when you got past security, it just looked like rolling hills & grass mounds. That’s because each different munition is separated & often kept in the ground in the hillsides. Pretty key for my old base in California which had wildfires rolling across it every year.

At the time as a dumb PFC it felt like overkill. All the tiny details & precautions made things take for-eh-ver… it was beyond tedious. But when stuff like this Siberian explosion happens you can’t help but feel nuts for ever thinking it was ‘too much safety’. I sound like my old Staff Sergeant right now, but all it takes is one quick moment of complacency & suddenly – disaster.

No word yet on what happened at this particular ASP, but I have no doubt they’ll come to find it was something preventable. I’m daydreaming of a young soldier currently in hiding & thinking, “Fuuuuuuuuuck… I really should not have flicked that cigarette by the Bunker Busters…”.

Worth noting, this isn’t the first time a munitions base has gone sky-high.

In Mozambique’s 2007 Maputo Armory Blast, old Soviet-manufactured weapons went off during a heat wave. At the very end of the video below you can hear hotel windows shattering even though the explosion was miles away:

In 2017 Ukraine had their 2nd ASP explosion at the Kalynivka base. Many officials believed it was sabotage & remarkably only one person was injured:

If you do a little Googlin’ you’ll see that these happen in different countries every year. As much of a total rebel badass as I am (ha…. ha….) the tougher & more annoying the regulations the better. In all sorts of circumstances….