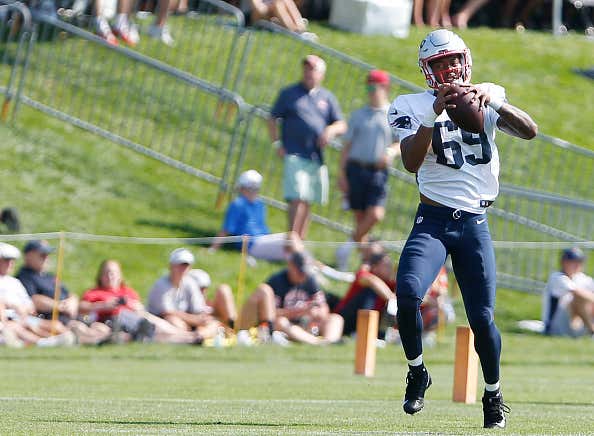 There’s a time honored tradition at the beginning of August in New England that’s as sacred as the lobster roll, Cape traffic, sunburns on Irish skin that was a pale blue in May, temporary Halloween stores opening or watching summer beers get replaced by Pumpkin Ales and Octoberfests while it’s still 95 degrees out. And that is the arrival of the Overhyped Wide Receiver Prospect. And this August is no exception.

Introducing the Patriots newest Undrafted Rookie Free Agent sensation Jakobi Meyers of NC State. He’s one of the No. 69s in your training camp program, and about to become No. 1 in your heart.

As camp has progressed, Meyers has moved up the ranks from one of those depth guys you refer to as “and the rest” to someone that makes you wonder whether you should bother teaching yourself to spell his name with a “k” and an “i” or whether there’s an “s” at the end, to taking reps with the second unit to today, when he lined up with the starters. And in doing so, follows in the actual footsteps of former intriguing camp wideouts such as Bethel Johnson, Taylor Price, Aaron Dobson, Malcolm Mitchell and Braxton Berrios. Does anyone else remember Tony Simmons, the kid out of Wisconsin? No? Just me? Meh, you’re not wrong to forget him.

Anyway, Meyers has been the absolute standout of Camp Belichick thus far. While N’Keal Harry has shown a sort of unnerving talent for following up an improbable, diving, full extension grab by dropping one that hits him right between the thumbs, Meyers has caught everything thrown at him practically. Including Thursday’s practice when he elevated to snatch a Tom Brady pass over Devin McCourty’s head and another from Jarrett Stidham between two defenders, tipping it to himself while keeping his concentration to secure it.

Now here comes the part where I’m required by Writing Law to issue a disclaimer about how it’s just practice and you’re not supposed to get excited about a rookie receiver. But eff that. I’d rather plead guilty and pay the court costs. What fun is camp if you can’t go all irrationally over-the-top about the future of a new guy who’s never caught a pass in the pros? People who say “Let’s not put him in Canton yet” are the same people who remind you not to get excited about a movie trailer because sometimes they make great trailers for shitty movies. What else am I supposed to? If I’m sitting there waiting for the lights to go down before “Once Upon a Time … in Hollywood” so the Irish Rose can pull the chiseler popcorn we smuggled in from home out of her purse and they preview that new Will Smith movie where he’s hunting his own clone, do you want me to just assume it’ll suck as bad as “Suicide Squad”? Let a guy live a little. There’s no harm in getting out over your skis a little on a new guy.

Getting back to Jakobi Meyers, it’s not that far out of the realm of possibility that he really is as good as he looked, even if he did go undrafted. The reason teams passed on him was an problematically slow 40-time at the Combine. He ran a 4.63, which is slow, even for a 6-1, 203 lb wideout. Hell, there were three tight ends and three quarterbacks who ran better than that. And Danny Etling runs a 4.76. As a matter of fact, out of 37 wideouts who ran at Indy, Meyers posted the 34th best time. But on the other hand, Harry ran the 21st fastest, which tells you how much stock the Patriots scouts put in 40-times.

What they do value is production. And with 92 receptions for 1,047 yards and a Senior Bowl invite, he checked that box. And while he consistently graded out somewhere in the range of 25th or so among receivers in his draft class, plenty of the gurus were impressed with his tape:

So allow me to get emotionally attached to this kid now and beat the rush. You should too. That Jakobi Meyers Hype Train is leaving the station, it’s an express and I’m not only on board, I am happy to drive it.