… but now from the NFL’s own official state-run media. And now that Gilmore is the Alpha at a crucial, elite, glamor  position like corner, has won a Super Bowl thanks to a game-sealing red zone interception: 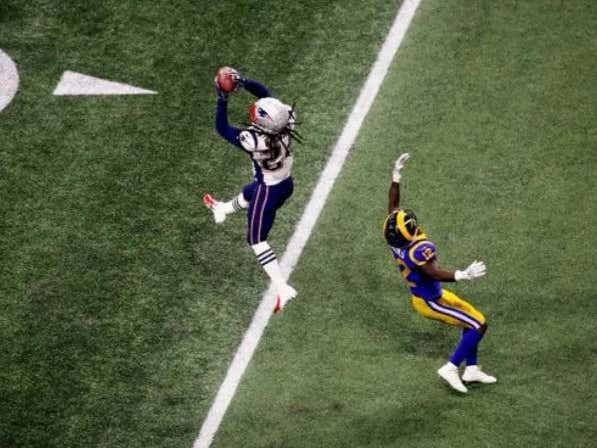 … I think it’s not at all unreasonable to say he’s fast approaching Mike Vrabel as the best free agent signing of the Bradichick Epoch.

Of course, there are plenty of people who wouldn’t admit that. Guys who ripped the Gilmore signing because they thought that money should’ve gone to Malcolm Butler instead. Who said Gilmore was a system CB in Buffalo and wouldn’t fit here.

And don’t even get me started on the nitwits who tore into Gilmore after his first four games in New England when the Pats defense was on a historically bad run. Don’t get me started because … well, I was one of them. From October of 2017:

I said in Monday’s Knee Jerk Reaction to the Panthers’ game that I’d probably do a deeper look at the debacle that is the Patriots’ defense right now. And here it is. My analysis. Based on both statistical analysis, film study and the opinions of the experts. Get ready. Here it comes: Sweet Jesus, are the awful. And Stephon Gilmore is more lost than he looked watching it live. …

The most valued free agent of the Bradichick Era played Sunday like he’d never been to a Patriots practice before. Worse. Like he’s not really clear on the whole concept of cornerbacking and doesn’t know who to ask because nobody around speaks his language. I’m convinced you could pull me up on stage at a production of “The Sound of Music” and tell me to play one of the Von Trapp kids, and I could do a fake my way through the part of Leisl better than Gilmore did approximating a Patriots defensive back Sunday.

By no means should what I’m saying be taken as letting anyone else off the hook. There’s a holocaust of wrong going on with this defense right now … [W]hen you’ve lapped the rest of the field like the Pebble Beach Tiger Woods of Shitty Defense, it can’t possibly be just one guy. …

[But] Gilmore is blowing so many coverages so badly that the numbers can’t account for it. He’s so far away from the scene of the crime that, statistically speaking, he stops being a suspect. You can’t convince me that all of a sudden everyone else in the secondary forgot the system they’ve all won two Super Bowls playing in. …

All I do know is that Belichick benched Gilmore for the start of the second half and only put him back in when Eric Rowe got hurt. And unless he gets with the program immediately, the worst defense we’ve seen in our lifetimes isn’t getting any better. 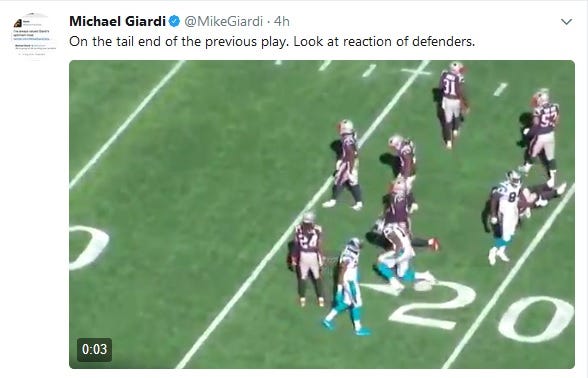 Yup. I said all those things. These are words coming back to haunt me. It’s like remember all the things you said to your kid about how lousy they’re doing in school as they go up to accept their diploma. At the time you said them, you meant them, but now you couldn’t be happier to have been wrong. He did get right back into the starting lineup. Work was done. Adjustments were made. Communication improved. And the defense Gilmore leads took this team to two Super Bowls and won one while holding the Rams to the lowest point total in the 53-year history of the game.

Congrats to Stephon Gilmore. I’ll eat all the crow from what I said in 2017, and it’ll taste better than the best fried clam platter on the Cape.