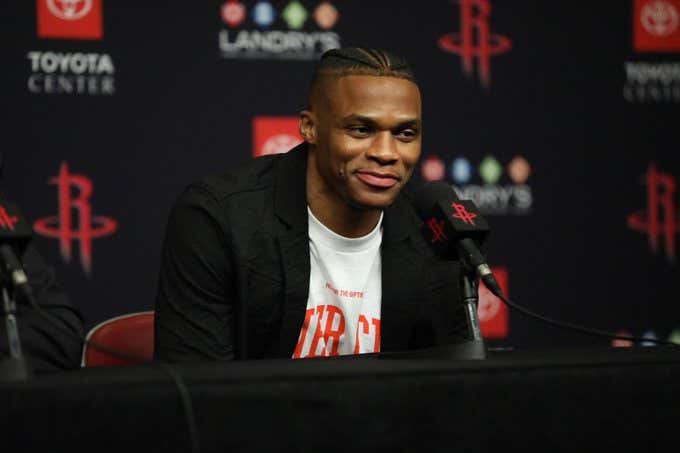 With all the changes we saw this summer, one of the moves that’s going to take the longest to get used to seeing at least for me is Russell Westbrook in a Rockets uniform. Sort of like how seeing Tony Parker in a Hornets jersey last summer broke my brain, I get a similar feeling seeing this

But the reality is there’s a new duo in Houston and in my opinion a better version than what we’ve seen the last few years. I get that people like to hate on Westbrook for his style of play, sort of like his teammate in James Harden, but call me crazy I think you have to be pretty fucking good to average a triple double for THREE straight seasons. I don’t care if he stat hunted in OKC, Russell Westbrook when healthy is one of the better guards in the entire league.

So now that he’s on board in HOU, the biggest and most obvious question is how will he work playing next to James Harden? Well he addressed that

Now there are fit questions, mostly because Westbrook was the worst high volume three point shooter in the NBA last year and last time I checked three point shooting was rather important to how the Rockets play. I’m sure D’Antoni will figure it out because he’s an offensive genius, maybe it means more off ball for Harden or something but it’s certainly something to note.

When he was asked about Harden’s role in this whole thing, I found his answer interesting

Especially the part where Westbrook said “when James wants something done”. Why is that important? Well how can we forget all the rumored problems between Harden and Chris Paul earlier this summer. Sounds like Harden may have made a request or something to Morey who earlier in June said CP3 was off the table. It seems like not only was Morey willing to listen to his star player, but maybe he realized there was a certain thing missing from how his team plays that he feels like Westbrook can bring

It’s fair to say maybe when the going gets tough the Rockets quit. You know who never quits? Russell Westbrook. Doesn’t matter if he’s up 20 or down 20 he’s a goddamn psycho at all times and something every contender needs.

Maybe that’s true off the court, but I would definitely not describe him as “nice” on the floor which maybe is a good thing. He was a legend in the community during his time in OKC and as long as you’re not soft like Durant maybe he’s not so bad to play with.

The Rockets are taking a big time chance that this whole thing is going to work out given what Westbrook is owed over the next few years, and part of me feels like since these two are rejoining forces later in their career after each having already achieved insane individual success that it can actually work. Either that or the two are going to absolutely murder each other and frankly I’m here for that as well. This is either a Finals contender or a ticking time bomb and I cannot wait to see what Westbrook does once James Harden dribbles for 20 straight seconds. Let the fun begin.