Over the past five years or so, BoJACK HORSEMAN has been the lone humanesque animal-based cartoon dominating Netflix with heavy criticisms of modern day society peppered in with self-reflective bits on depression and the fleeting desire to fit in. Well, slide the fuck on over, horse boy, because the KING of guising itself as a hilarious cartoon while actually being supremely fucked up is back in town and I’m positive that Wallaby has something to say. Or this is just a nostalgia grab for Netflix to keep our ever-wandering attention. Either way, I’m all the way in. Hook, line, and sinker, I’m in on more ROCKO’S MODERN LIFE in 2019.

Rocko was a wild boy. The standards for “edgy” or “adult” cartoons during ROCKO’s era were REN & STIMPY and BEAVIS & BUTTHEAD, so ROCKO was able to stay a little below the radar for just how fucked up it was. But make no bones about it, my man was working as a sex phone worker, was constantly trying to escape his married neighbor’s clutches, and – despite very clearly being an animal – owned another animal as a pet. The local fast food restaurant was named after a masturbatory technique. 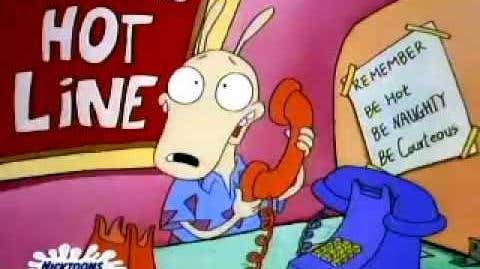 ROCKO’S MODERN LIFE very heavily focused on stories dealing with real life shit. And that shit was terrifying if you were paying attention. It had plenty of punchlines and foils to keep even the most heavily medicated child amused, but with how frequent Death was made a tangible character, with the consequences constantly faced, the overt inclusion of the deadly sins, ROCKO’S MODERN LIFE was a heavy ride for a daytime Nickelodeon cartoon aimed at children. And it lived in a perfect space – not as fucked up as REN & STIMPY, not as popular as RUGRATS or DOUG – for it to get off four seasons in the middle of the ’90s.

And now without the bounds of a more traditional network like Nickelodeon, I’m supremely hopeful that they’ll go as far as they can in O-Town with Heffer, Sheldon, Spunky, Ed Bighead, everyone. I want this to be as much of an acid trip as possible and to fuck me up in ways I don’t even know were possible. Like every great cartoon should.