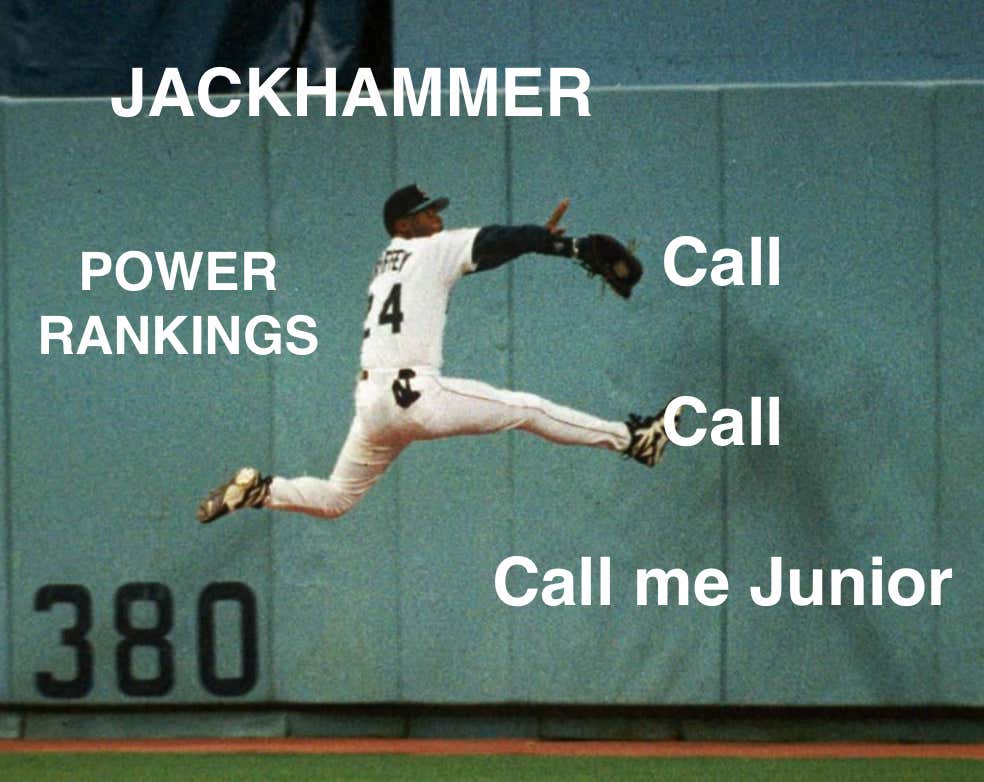 30. Orioles: outscored 32-9 vs. the Rays this weekend. Completely and utter garbage.

29. Royals: 5 out of 9 regular starters are averaging a 66 OPS+ meaning that a majority of the Kansas City Royals are 33% worse than your average baseball player. Royals’ fans are losing on average 25,000 brain cells each day they don’t trade Whit Merrifield.

27. Mets: probably a lot better than 27th in MLB but at the same time this is all relative to your club’s respective shittyness. The Mets should be sooooo much better and I’m hearing rumors now you can’t wear a Fire Wilpon shirt in Citi Field any longer. Fuck them.

26. Marlins: this is me trying to make a statement about how bad and disappointing the Mets are

“If Only We Had Better Players”

25. Blue Jays: but for Vlad Junior, I could very reasonably go up to 4 weeks without creating one organic thought about the Blue Jays

23. Giants: Playing well after the All Star Break because 16 of their 25 players are at least 31 years old. That’s such an old guy thing to come out and fuck people up after a big rest. Wait 2 weeks and they’ll be back to their slightly below .500 record

21. Reds: Most underrated staff in baseball met with an equally unbalanced lineup

20. Pirates: classic Clint Hurdle team filled with grindy gritty infielders that can’t consistently hit for power and a pitching staff that loves giving hitters haircuts. They’ll never be better than 4th in this Division under this group

18. Rockies: more substantial home field advantage but when you dig their numbers on the road it’s flat out embarrassing. If I’m a Rockies fan I don’t know how I survive a 2-week stretch of games. F-5 heart attack city

We Regret This Offseason

17. The Phillies: I like Bryce because he loves the game so much, but at the same time it’s hard not to feel bad for Phillies fans. 13 year deal is numbing.

16. Cardinals: even when the Cardinals lose 10 games in a row they still win games. I cant explain it. Every time you look away they pull me back in with hatred

13. Nationals: Is there a better 1/2 than Scherzer and Corbin? Probably not, and the pressure on Strasburg to be career average is rampant. That would be a horrible ALDS matchup: Scherzer, Corbin, Strasburg, Scherzer, Corbin. Find 3 wins there.

12. Rangers: a lot higher in other rankings but lacking any consistency in the lineup. Only 2 regulars over 100 OPS+ and minimal pitching depth but holy fuck is Joey Gallo good

11. Angels: I wouldn’t be surprised if the Angels took the 2nd wild card. Mike Trout is on a mission and let’s leave it at that.

Playoffs? You Want To Talk About Playoffs?

10. Indians: I can’t wait to see Francisco Lindor get $500m from the New York Mets this offseason. Sad for his career, but phenomenal content.

8. Red Sox: Carrabis got a World Series ring this weekend which because it’s Boston and this is Barstool, probably means they win 30 of 31 to start the 2H.

7.  Cubs: I wish the Cubs didn’t make my job so much harder than it needs to be

6. Braves: This is what a near flawless rebuild looks like

We Will Humiliate You In 3 Games

3. Rays: The last team I want to play in a 7-game series. Immensely frustrating, unbelievable pitching staff, defensive wizardry and young studs for days. Most important though the Rays don’t give a flying fuck about your team

2. Yankees: everyone said imagine this team healthy and they’re almost there.

1. Dodgers: literally everyone on this team is a good player. They don’t have one asshole. Not one brutal out. Everyone fucking mashes and all their pitchers are nasty. This is what it looks like when you get the smartest people in the room and an ownership group that only cares about winning. If ever there was a year to win the whole thing, this would be it.

There’s your power rankings. Listen to Red Line Radio tomorrow for more on why your team sucks.