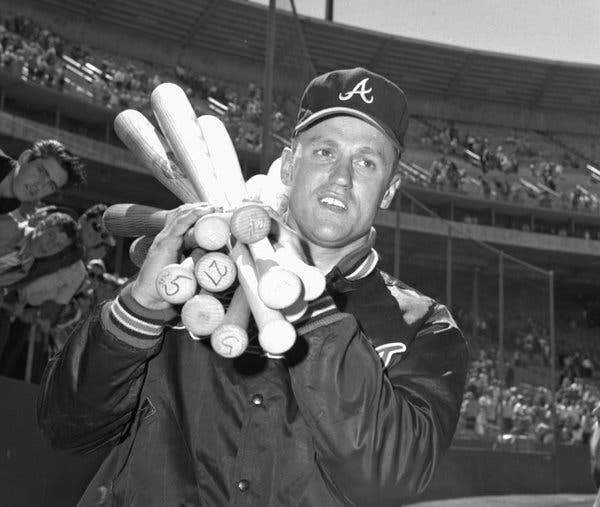 Tony Cloninger has a day to remember, hitting two grand slams as the Atlanta Braves beat the San Francisco Giants 17-3 at Candlestick Park. He later added an RBI single and went 3-for-5 with nine RBI, while pitching a complete game to get the win for the Braves. No pitcher before or since had ever hit two grand slams in the same game.

Tony Cloninger was born August 13, 1940, in Cherryville, North Carolina. Signed out of high school by the Milwaukee Braves, Cloninger made his debut on June 15, 1961. That season he went 7-2, mainly pitching out of the bullpen. Tony Cloninger became a full-time starter for the Braves in 1964, going 19-14 a year later he had 24 wins as the Braves said goodbye to Milwaukee.

The move to Atlanta gave Tony Clonginer a chance to be closer to home, but for the rest of the Braves, the 1966 season as one of the adjustments as that got used to Fulton County Stadium, which became known as the launching pad for the number of home runs hit. The Braves managed by Bobby Bragan had struggled through the first half of the season and sat at 35-45 as they prepared to take on the first place San Francisco Giants, in the finale of a four-game set.

On a Sunday Afternoon at Candlestick Park, Manager Herman Franks had Joe Gibbon on the mound, while Tony Cloninger who entered the game with an 8-7 record would start for the Braves. Felipe Alou led off for the Braves, while his wife was back in Atlanta giving birth to a baby boy named Moises. Alou flew out to second base to start the game. His brother Jesus Alou was the leadoff hitter for the Giants. Mack Jones followed with a single, while Hank Aaron reached on a fielder’s choice. Nothing suggested the roof was about to cave in on the Giants, but that is what would happen as Rico Carty singled and Joe Torre hit a three-run home run. After the Torre blast, the Braves continued to smack Gibbon around as Frank Bolling and Woody Woodward reached base with singles. This led to a pitching change as Bob Priddy came in with two outs and two on. Dennis Menke walked to load the bases setting up the first moment for Tony Cloninger to show off his hitting prowess as he hit a grand slam to make it 7-0 before ever throwing a pitch in the game. Alou, who began the inning with an infield fly, ends with a grounder to short.

Cloninger went through the Giants with ease in the first as Rico Carty made it 8-0 with a second-inning home run. In the fourth inning with Ray Sadecki on to pitch for the Giants, the Braves again made noise as an error by Jim Ray Hart opened the floodgates. After Hart mishandled a grounder off the bat to Joe Torre, Frank Bolling singled home Carty who had reached base on a walk. Woody Woodward flew out to short as Dennis Menke walked to load the bases again. Cloninger who grounded out in the third was up for a second time with the bases loaded and hit another home run, making the score 13-0 in favor of Atlanta. Alou would reach on an error, but Sadecki limited the damage as he struck out Mack Jones to end the inning.

The Giants got a run back in the fourth as Len Gabrielson singled home Willie Mays. However, the Giants began sending up the white flag as the Say Hey Kid was lifted, Don Landrum. Meanwhile, the Atlanta assault continued as Hank Aaron homered in the fifth. Ray Sadecki who was taking one for the team, got a measure of pride back when he homered of Cloninger to make it 14-2. In the eighth inning, the Braves added to their lead as Tony Cloninger singled home Woodward to make 15-2. Tom Haller homered in the bottom of the eighth, but the Braves tacked on two more runs in the ninth with Gary Geiger recording an RBI double and later scoring on a sac fly by Frank Bolling to make final score 17-3.

Tony Cloninger’s two grand slams have become the stuff of legend as he earned the win, allowing three runs on seven hits with five strikeouts. In total, Cloninger hit five home runs in a 12-year career.