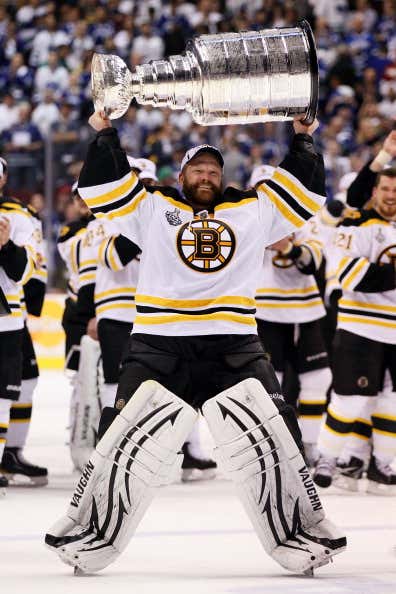 So reports are coming out about who will be the banner captain tonight for the Bruins-Blues Game 7. For those who don’t know, the banner captain is someone who waves a Bruins flag right before the game starts and the whole crowd goes absolutely bananalands. We have seen Bobby Orr, Ray Bourque, Tedy Bruschi, Bill Belchick and now tonight we will reportedly see Tim Thomas. Cj Golson from Yahoo Sports is reporting that 2011 Stanley Cup Champion Tim Thomas is in Boston and will be waving the flag tonight as the banner captain.

I tweeted after Game 6 that I think the Garden would go fucking insane if Tim Thomas was the banner captain only to walk into Barstool HQ and get a bunch of shit from people (what a call by me). I think someone even suggested they might boo? Not a chance.

What Tim Thomas did in 2011 was something out of a movie. Bruins fans will remember and cherish his performance that postseason forever. The 2011 Conn Smythe winner put the boys on his back and Bruins fans will never forget that.

I have actually never heard a Bruins fan say bad word about Tim Thomas. It’s basically just godly praise. Like he is some majestically unicorn that came down, won us the cup, and then disappeared forever. Even though that is basically what happened, Bruins fans love Tim Thomas don’t give two shits about the extracurriculars. The only people who seemed to have a problem with Thomas are the same people who want to bring politics into everything. Tim Thomas didn’t go to the White House the year the team won, big fucking deal. No one gives a shit, certainly not true Bruins fans.

Tim Thomas gave Bruins fans their first cup in 39 years and there won’t be a single person in the crowd booing tonight if Thomas does indeed wave the flag. The place will be the loudest it has been all season, as it should be.