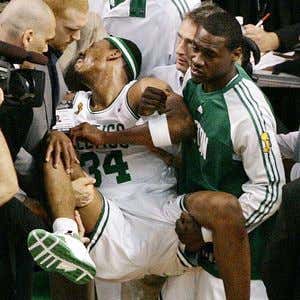 I’ve said it time and time again, I could listen to Tony Allen tell stories all damn day. Same thing with Perk. Since the moment Paul Pierce went on TV and said this

nobody has any idea what to believe. Was he telling the truth or just playing into an internet rumor for fun? Well if there’s one person who could provide insight into the events that went on during those 2008 Finals it’s the man that was involved in carrying Paul to the tunnel, Tony Allen. Pretty interesting that TA was like the rest of us and figured Pierce was really hurt and just went back for a shot or something. I loved how he didn’t see the issue if Pierce was really turtle heading, so you had to poop big deal it happens all the time apparently.

I can also understand his frustration with Paul if this whole thing is really true and he had to carry a man who had just pooped his pants. I guess that was just Pierce’s dedication to selling the whole thing but it’s messed up to do Tony like that. His hand was veryyyyy close to the edge of Pierce’s shorts and who knows what may have happened if something leaked out. In fact it’s too bad that didn’t happen because the reaction would have been priceless.

When this clip started I was hoping to get some much needed answers on this whole situation but now I’m just as confused as ever. I think Pierce, Tony, and Perk all need to get in a room together and hash this thing out.