Buckle up, because this is one of the better Twitter thread stories that I’ve seen in quite some time. Very viral Twitter stories come and go here and there. Some are true. Some turn out to be lies. That’s the thing about Twitter, anyone can make anything up and it doesn’t matter because at the end of the day everyone is so obsessed with Internet points and validation from stangers that we lose touch with reality. Like, remember this guy who went very viral with a story about transporting heroin?

It was all a lie. All of it. I mean people were offering him book deals and interviews and sending him money. And he just made it all up. Does it matter if you lie about something on Twitter if people choose to believe it and send you money? I’m not sure. It’s such an interesting concept because the Internet moves so fast it’s impossible to regulate things like this. I mean KB talks all the time about people who steal tweets, grow their accounts to hundreds of thousands of followers, and then sell the account. People Venmo strangers on the internet posing as other people all the time, it’s a disaster. Is it illegal though? Man, the internet really is a fucked up place.

Buy anyway, I digress. I guess I kinda got off track here, because I actually did enjoy the story told by the top Tweeter. I just wanted to say how it’s possible it’s not true, and then the blog got away from me and I had an existential crisis half way through. But anyway, I hope it’s true, because it’s a good story. A wild one, but a good one: 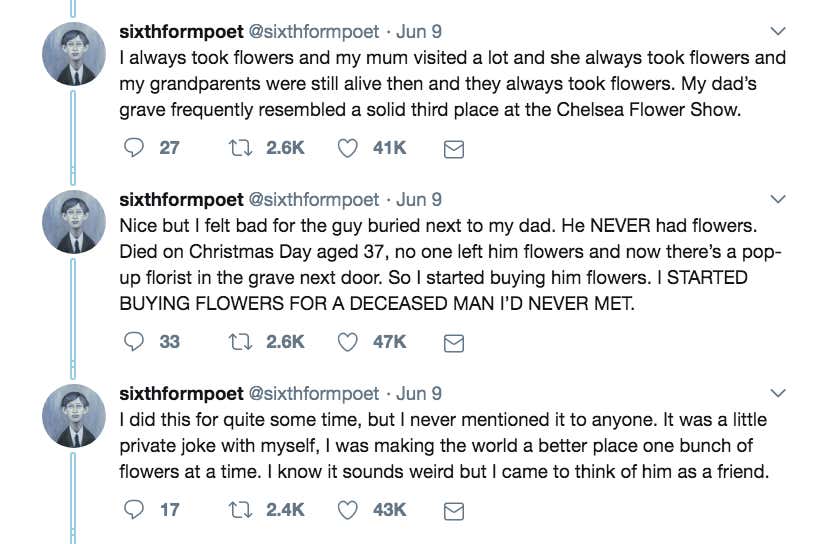 Ok weird, but understandable. If you go to your father’s grave all the time but there’s never any visitors for the grave right next to his, I could see you becoming somewhat sad about it and wanting to let the guy, though dead, know that he mattered. I don’t think it’s that insane. But as it turns out…

…Oh. Yeah, that’ll do it. And he’d been buying that guy flowers…for 2 and a half years. Whoops! So what does this weirdo do now? 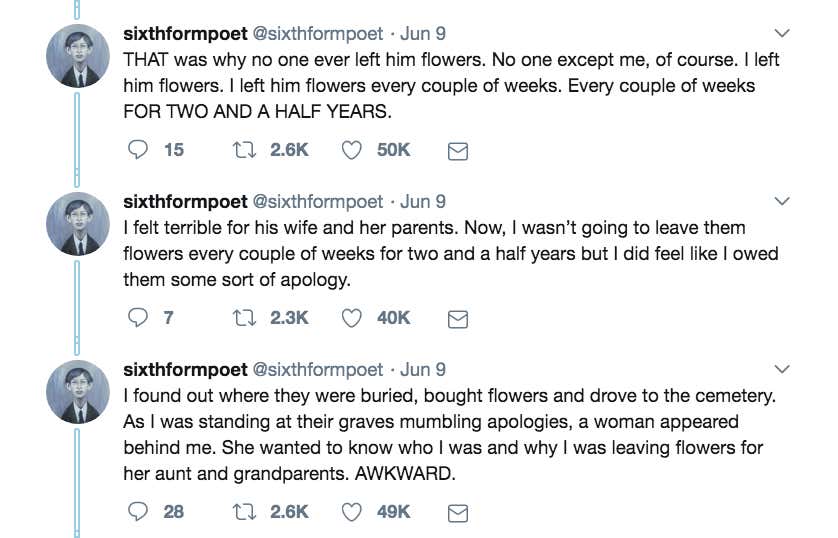 STOP BUYING RANDOM PEOPLE FLOWERS DUDE. I mean I guess I could see how the guilt of buying a man who killed his entire family flowers for over 2 years could compound, but still, just chill on the flowers. But alas….

Now look. I think we are all very cynical people on the Internet. We believe nothing and discredit everything that remotely sways away from the norm unless it takes place in Florida. So this story being true strikes me as very unlikely. But at the same time…I mean…you gotta meet your wife *somehow*. Not everyone swipes right on a 5.5 at 2am, has her meet you back at your place, and end up dating her for 3 years because you figure you’ll never find someone else that’ll show you affection you even though you know she’s not right for you and you hate her family but at this point don’t want to start the dating process all over again so you begrudgingly propose even though you’re pretty sure when she went to that bachelorette party in Nashville she definitely cheated on you but you’re so stressed at work you don’t even want to broach the subject because my god that sounds so dreadful so you just keep it in the back of your mind forever and drink 12 beers a night, put on 70 pounds in a year, and live in a loveless marriage until you’re divorced, fat, and bald at 40 years old with nothing but a huge mortgage, a stupid kid, and a Subaru to show for it.

So is this story real? Is it fake? And does it matter? I don’t know the answer to any of it. It’s gone crazy viral, and here’s the final thing- if it’s real, great. If it’s fake, at least we spent 10 minutes thinking about it instead of worrying about real life, so whatever.