The 2008 Celtics were awesome to watch. Rondo was absolutely incredible. Kevin Garnett was everything we hoped he would be. Ray Allen was… solid (you may recall that he went somewhat cold during the playoffs). But during game 1 of the finals, Paul Pierce became a European soccer player and created one of the most haunting, embarrassing moments in the history of Boston sports. He left the floor and was carried off like a bundle of aid blankets at a post-earthquake U.N. camp. The guy was lugged in the weirdest, most emasculating way possible to a wheelchair, as though he was going to give birth at any second (this would lend credence to the theory that he had to take a shit, but I don’t think he instructed his sherpas to keep his knees wide. If he’s actually crowning, he’d probably tell them to carry him like a pencil, which would allow him to clench his butt cheeks like a vice to prevent leakage.) 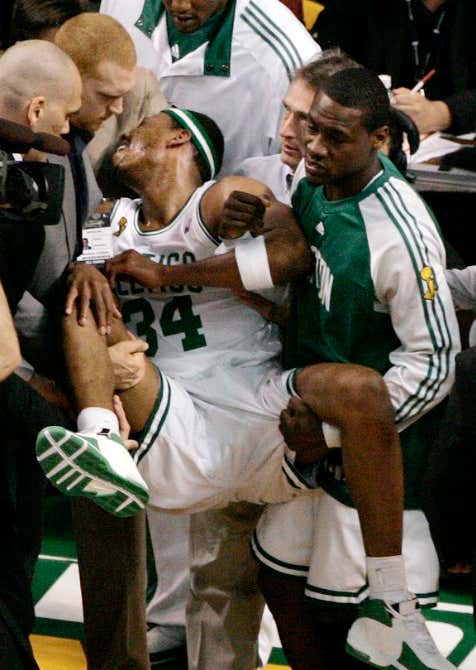 Look at that death grimace. Like he’s chokingly telling Scalabrine to pass on a message to his wife. A piggyback would have been less humiliating.

Shortly after, he came back out, was totally fine, and drained a couple threes to raucous applause. The crowd worshipped him and the scene had shades of Willis Reed hitting the first bucket of the 1970 NBA finals. Admittedly, I was extremely excited at the time; we thought we were seeing some magical witchcraft heeling before our eyes. But the moment stands as a blight on Pierce’s career. Here was a player raised in the mean streets of Inglewood, who once (may or may not have) flashed the Piru Bloods hand sign to the Hawks bench in anger. He was the face of the Celtics, a franchise known for its grittiness. And through one protracted, histrionic moan, he pussed it all away.

12 years later, Pierce tried to rewrite the story, and the internet swallowed it. Greenie went against his instincts and took the poop hook, line, and floater. Every news outlet jumped on the poop, because that’s a funny story.

But if you actually think Paul Pierce shit his pants, left the floor like a foldable fence, sat in a wheelchair clutching his knee, and then returned with his bowels evacuated? You’re a fucking moron.

Paul Pierce made this nonsense up to save face 11 years after it happened. Had he actually shit himself, he would have told the world sooner because frankly, that’s less embarrassing than what we all saw. In fact, to me, this bullshit poop scapegoat makes it worse for him, because he’s trying to pin his dramatics on a relatable, sympathy-inducing bodily function. As in, “We’ve all pooped our pants. Can’t blame Paul for making such a scene.”

Yes we can, and we must. Just as German schools don’t hold back the truth when teaching the horrors of Hitler, Celtics fans mustn’t succumb to revisionist history when looking back at Pierce’s wheelchair fiasco. It happened, it was really bad, and we must be honest about it to make sure it never happens again.