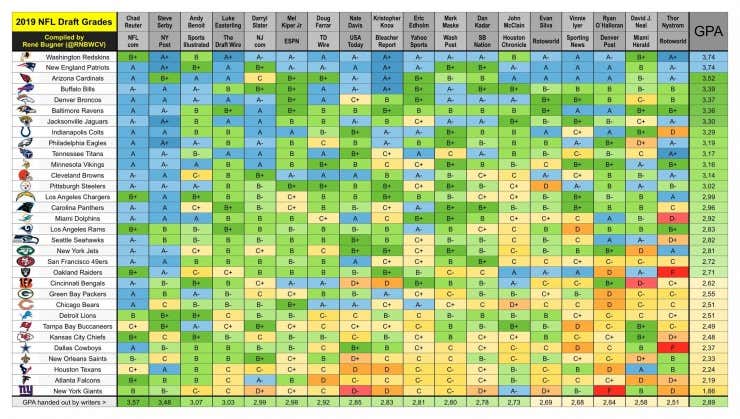 Like this image says, credit for putting this graphic together goes to @RNBWCV. And while I should feel encouraged by the fact 18 different draft pundits gave them no less than a B+ and the highest GPA of any team in the league, instead I’m just … worried? I guess? Concerned, perhaps? Troubled?

Look, I’ve been at this a long time. And if there’s one thing I’ve learned it’s that when all the experts agree with you, you know something is wrong. I remember reading a gambling column once that told the story (apparently true) of this bookie who had a Catholic priest place bets through him on pro football, but just every so often. And every time he did, he won. So the bookie finally asked him what his system is. And the priest said that he reads the Friday predictions in his local paper. And when all of the writers agree on a game, he bets against them.

That’s how the NFL draft tends to go. Certainly for the Patriots during the rule of House Belichick. And most certainly from the New England media. From Ron Borges’ legendary “Richard Seymour is too small to play tackle and too slow to play end and Matt Light won’t help any time soon” when they didn’t take WRs David Terrell or Koren Robinson. To WEEI’s wall-to-wall bellyaching about Devin McCourty just being “a gunnah.” To Felger and Mazz and Greg Bedard still insisting that Sony Michel was a wasted pick that could’ve been replaced with any UDFA, despite a postseason average of 112 YPG, with six TDs, including the only touchdown of the Super Bowl and a ring. Oh, and let’s not forget that every, single one of them was against the Aaron Hernandez pick … three years and three murders after the fact.

The football intelligensia around here taking a big, steaming deuce on the Patriots draft is as much an annual tradition around here as the Marathon, the Pops 4th of July concert and the storm drains of Southie running black with Guinness puke on parade Sunday.

So yeah, I find this outpouring of love and praise a little unnerving. A lot unnerving.  I mean, look at the company they’re keeping at the top of this list. Can anyone in New England feel good about having the franchise you’re co-valedictorian with on this list be … the Redskins? Arizona just used the 10th overall pick on their next franchise quarterback and then jettisoned the pod a year later. Are the Bills anyone’s gold standard of player acquisition excellence? Denver, for Christ??? John Elway was gifted Von Miller in his first year. Since then he’s set his franchise back a generation with massive whiffs on Brock Osweiler (57th) and Paxton Lynch (26th) and is one more QB bust away from collecting unemployment. (No pressure though, Drew Lock.) Is anyone at One Patriots Place bragging about being graded 0.37 points ahead of him?

At least Belichick did himself a couple of favors in this regard. I caught one Sports Hub show do a whole segment on how reckless and irresponsible it was to move up in the 5th round to take a punter. And USA Today called Damien Harris (87th pick) one of “The 6 Absolute Worst Selections in the 2019 Draft”:

There were solid tight ends on the board. But Bill Belichick is clearly moving away from the tight end position, now that Rob Gronkowski has retired. He signed Matt LaCosse and Austin Seferian-Jenkins, neither of whom figure to be prolific. The Patriots clearly expect more production out of their receivers and running backs. Still, this selection feels like a bit of a redundancy: Michel became a power back with almost no contributions as a pass-catcher and Harris figures to become a very similar player.

So we got that going for us. Which is nice. And exactly the kind of thing I’ve come to rely on. It’s part of what makes late April around here fun and September-through-February that much more funner. So let’s keep bringing that sweet, sweet, know-it-all negativity. I’m not loving all this love.