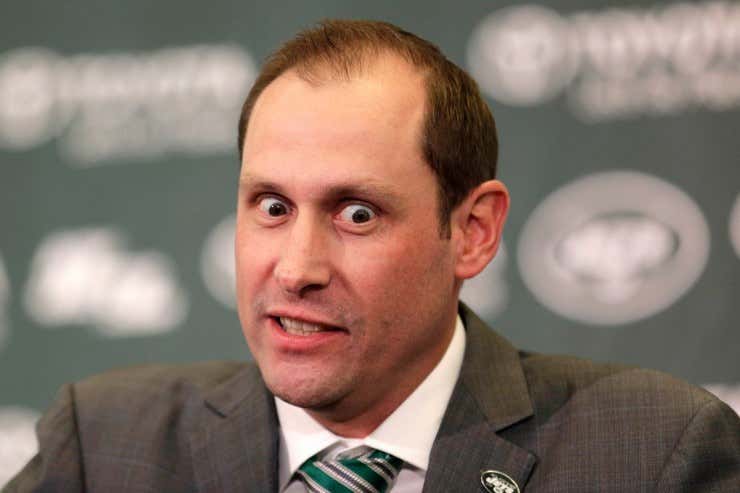 ESPN – New York Jets general manager Mike Maccagnan, addressing reports of a rift with Adam Gase, said Friday night that he has a strong rapport with the team’s new coach.

“Actually, I think Adam and I have worked very well together,” said Maccagnan, who played a key role in hiring Gase in January. … Gase was not available to comment.

On Friday, The Athletic and DraftAnalyst.com reported there was friction between Gase and Maccagnan, who has control over the 53-man roster. A league source told ESPN that they had disagreements over certain personnel decisions during free agency, adding that CEO Christopher Johnson started spending more time at the facility to observe the dynamic between the coach and general manager.

PFT – The rumors and reports are nevertheless out there. Two difference league sources told PFT on Friday afternoon that, after the draft, Maccagnan quite possibly will be relieved of his duties. …

Some have pointed to the decision to sign running back Le’Veon Bell as the biggest sticking point between Gase and Maccagnan. (Or, more accurately, the decision to pay Bell as much as the Jets did, given that the Jets likely could have gotten him for significantly less.) Bell’s decision to skip a voluntary minicamp this week gave Gase plenty of ammunition for a round of I told you so’s within the team’s facility.

You know, I’m not really hardwired to give the New York Jets the benefit of the doubt. A few decades of adulthood spent observing their patented brand of institutional fuckery will do that to you. But I was willing to think that just maybe this was some of your typical New York tabloid stuff. That maybe the Giants are pushing some agenda through their loyal media psyops guys to take the attention off their own dysfunction.

That is, until a buddy of mine brought this to my attention:

Which, again I was skeptical of. The idea of a GM not getting his head coach directly on the line with the players he’s drafting sounds so bizarre I can’t picture it.

I didn’t have to. I checked it out for myself. And it actually happened. Here are all the people who talked to Quinnen Williams:

Here’s Mike Maccagnan drafting Chuma Edogwa, and immediately handing the phone to some who is decidedly not Adam Gase:

Here’s Maccagnan calling Trevon Wesco and putting him on with the tight ends coach:

No wonder Gase was “not available to comment.” Was he even in the room? What if he wanted to talk to these guys? Or they to him? Did Maccagnan say “Shun!” like Dwight did to Andy Bernard and then if a draft pick asked to talk to his head coach he’d have to do the “Unshun!” and then “Re-shun!” after they hung up?

And imagine being one of these kids. You’ve been waiting for this phone call since the first time you squeezed your head into a helmet in Pop Warner. And when it finally comes it’s from this insane, shit pickle organization. Then you ask around because the whole thing felt weird, only to do some research and be told just how messed up the situation you’re walking into is. And there is no way out of it. You are in an amusement park car with a one way ticket into that No Fun House, the pimply kid pulled the bar down onto your lap and there is no getting off the ride.

Just the Jets being the Jets. Have fun, rookies.