(WGNTV)–The woman who authorities say was caught on video tossing a bag of newborn puppies near a dumpster in Coachella, California, last week was arrested on Monday.

Culwell could face up to seven counts of felony animal cruelty, Welsh said.

Culwell was seen in the video leaving the seven newborn puppies in a plastic bag near a dumpster behind a NAPA Auto Parts store on Thursday afternoon, according to Riverside County Animal Services.

I read that headline and instantly gasped with shock, then got sad, and since I saw it last night I’ve been filled with rage. I don’t know what the punishment is for this person, but in this situation I am willing to throw out the Constitution and demand the penalty be both cruel and unusual.

Initially I wanted the death penalty, but that’s not cruel enough so I transitioned to the Ramsay Bolton school of thought. You kill a dog, well guess what toots, now a dog is going to kill you.

But you know what…that isn’t fair to the dogs. Dogs don’t want to kill humans. Only dogs who have been raised by maniacs would do that. Dogs just want to give kisses and get belly rubs. It’s not fair to ask them to be an executioner.

I am not a cruel-minded person. I struggle to come up with creative forms of torture. Everything top of mind comes from HBO. The walk of atonement

While this is the type of public humiliation this woman deserves, it isn’t long enough. I need the punishment to be for however long the puppies live. You tried to kill them, so now you’re imprisoned until the last survivor goes to live at farm upstate where they’ll chase bunnies and squirels in heaven. And not just regular prison. Public stockade prison like in another HBO show…The Leftovers 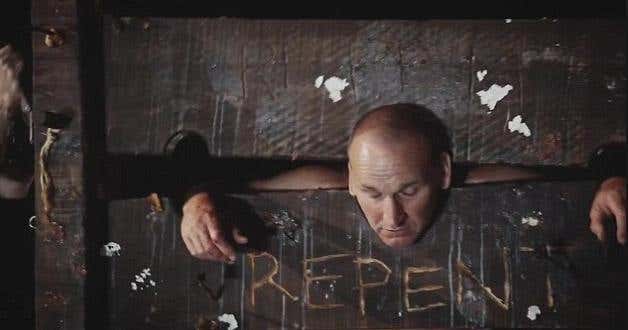 I need her to willingly get in the stockade after the march of atonement and then stay there. Death penalty or accept this fate. Her choice. That’s justice.