Look at these idiots. What a hill to die on. The only people who know for sure whether Michael Jackson molested these kids are Michael Jackson and the accusers. Everyone else is guessing. All we have is their testimony. At the very least, some weird shit went down. Point is… how can you die on this side of the hill? How can you take to the streets to protest for this cause, on camera, with the internet engraving your angry mug onto its Mount Hushmore? The only way that these people “win” is if ALL the Michael Jackson accusers simultaneously come forward to say they made everything up. Any other outcome and these people look like assholes. Because let’s be honest: the stakes of being wrong about this one are pretty high. If you’re wrong, then you’re the guy who picketed on behalf of a child rapist. Nobody wants to talk to that guy at a dinner party.

Don’t believe me? Here’s a helpful chart I found: 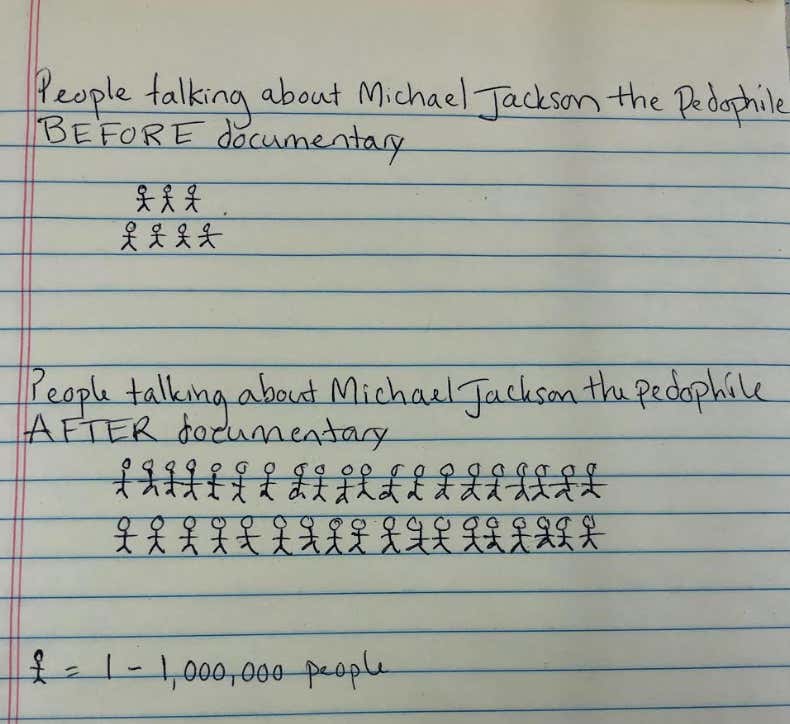 As you can see, each person on the chart represents somewhere between one and 1,000,000 people. It’s not the most precise graph, but it shows that before the doc, somewhere between seven and seven million people were talking about Michael Jackson’s diddles. AFTER the doc, it’s like 40 to 40 MILLION. That’s a HUGE difference. Sorry Peggy. Math always wins.

Where do you put them in the pantheon of reactionary assholes? Sandy Hook conspiracy theorists are up there. You’ve got the Penn State kids who rioted when Joe Paterno was fired, and we all know how well that aged. And don’t forget—and I’m biased on this one—the reporters and professors at Duke who marched against the “rapists” on the lacrosse team.

PS- not seeing too many R Kelly defenders in the streets. Guess he didn’t sell enough records.