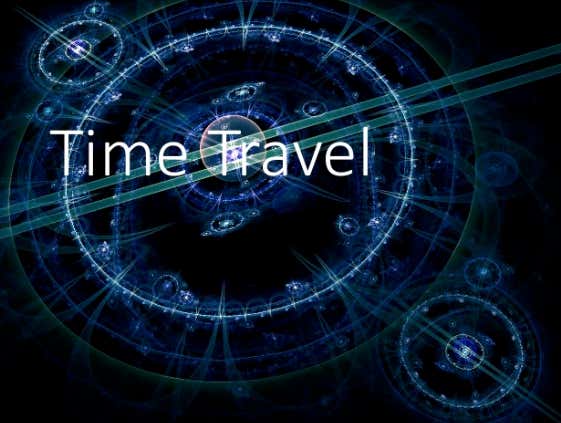 A while back I got into some conversation with Chief about weird science stuff.  He told me this theory about how Christmas actually started in Russia 1000s of years ago with people tripping on red and green magic mushrooms or some shit.  I forget the entire thesis of his explanation but that’s the jist of it and it seems plausible to me.

Anyways I have a bad habit of falling asleep with the TV on because I have to have some background noise or I’ll stay up all night.  A few years back I woke up with the History Channel on and Dr. Stephen Hawking was explaining time travel and how it’s possible.  This was my scientific one upper to Chief’s Christmas/magic mushroom theory, and it’s truthfully an awesome concept. Watch the video below and tell me time traveling isn’t possible…

…You can’t.  Or actually now that I think about it you can, because we don’t have the technology to pull this off, but in theory it works.

And it gots me to thinking, “When would I travel back in time to?”

Now I wouldn’t go back in time to shake Jesus hand, throw back a brew with Abraham Lincoln or stop Franz Ferdinand from taking a bullet to the back of the head.  I don’t care about any of that shit.  All I care about is sports.

Now obviously I’ll pull a Biff from Back to the Future II, bet my face off and get rich as fuck, but that’s a given.  Or better yet I’d pull a Lou from Hot Tub Time Machine and invent a bunch of shit that I already knew would exist and start rock bands

But that’s not exactly what we’re talking about here.  The purpose of this blog is to discuss certain events we’d love to see again or stop from happening altogether.

So without further ado, my top 3 moments I’d travel back in time to:

Until the last week, this was the lowest point in my life.  I get it; I’m a loser.  I’m petty.  I root for an organization that is piling up L’s where the team across town has had a nicely sustained run of success.  So why would I want to go back to this day?

Simple, I’d do whatever possible to stop the asshole umpires from huddling up and calling a rain delay that only lasted like 3 minutes.  If that rain out doesn’t happen, the Cubs probably don’t win.  If the Cubs don’t win, they’re on year 111 of not winning a World Series.  Goddamnit

Self explanatory.  Best month of my life.  I wish I weren’t 16 so I could have celebrated by getting hammered out of my skull in the city with my friends, but nevertheless this whole playoff run was magical.  Not sure I’ll ever get to experience it again.  In fact now that I think about it I could have gone by way of the aforementioned Franz Ferdinand and I’d have died happy.

Now obviously the first thing I’m doing in my time travel adventure is traveling back to 9:48pm on February 3rd of 2019.  I wouldn’t have sent that stupid, hyperbolic tweet.  I can’t though because that asshole Dr. Hawking didn’t invent his time traveling train before he passed away.  Dick.

Whatever though.  Mousesoxdave in the house from until eternity or at least until Dr. Hawking is reincarnated.

If you’re a Barstool Gold member, leave a reply calling me a mouse and when you’d travel back in time to.  Thank you.