Source – New England Patriots owner Robert Kraft is being charged with misdemeanor solicitation of prostitution after he was twice videotaped paying for a sex act at an illicit massage parlor, police in Florida said Friday. …

Jupiter police said details about the charges against Kraft will not be released until next week. …

In a statement, a spokesperson for Kraft said they “categorically deny that Mr. Kraft engaged in any illegal activity. Because it is a judicial matter, we will not be commenting further.”

I love it. God help me, how I do love it so. Right now, The Tug Rule/Fellategate (I’m still weighing my options) is a he says/they say situation. Mr. Kraft against The Man. “Categorical” denials against allegedly two hidden surveillance tapes. And what’s on the line? A great man’s reputation.

This is why it’s important to give the benefit of the doubt. Dare I say, crucial. Especially in this age we live in where everyone is a public speaker and therefore has to be responsible for the consequences of what they say. I mean, just look at what people were saying about those Catholic high school kids after one video made it look like they were the aggressors against the American Indian guy. Or how quick they were to take Jussie Smollet’s word he was the victim of a hate crime. Now it looks like the world will have the weekend at until more facts come out and we can make a more informed judgment call.

The man who saved pro football in New England and built a dynasty.  Who turned his back on the sweetest of sweetheart deals in Hartford to build his own stadium with his own money and no Personal Seat Licenses. Who looked out upon the worst stadium of all time, built in the middle of a Martian landscape and envisioned a retail and entertainment mecca and made it happen. Who is a loyal Barstool supporter. That man has earned my trust.

He’s not exercising his right to remain silent. He’s not saying he’s involved. He’s saying he did nothing illegal. And that’s good enough for me. He’s never lied before, he’s not about to start now. Just like I was right about Deflategate from minute one and never had to change my position on it – as well as a dozen other phony-baloney “scandals” during this run of unimaginable success –  I’ll stand my ground now and say Mr. Kraft is innocent. His spokesman says it. Let the record show I say it. 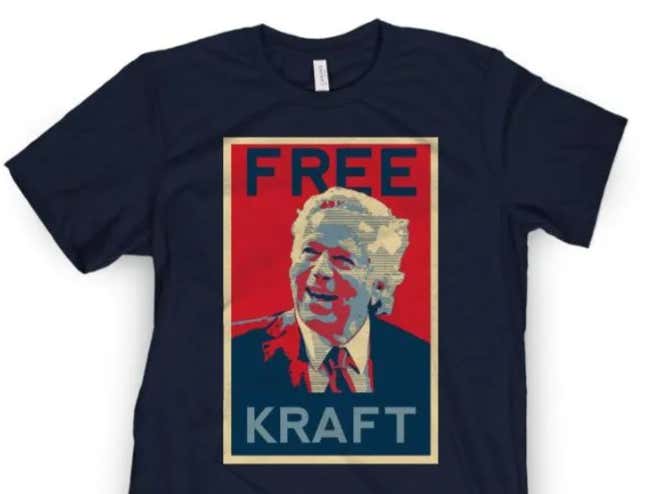