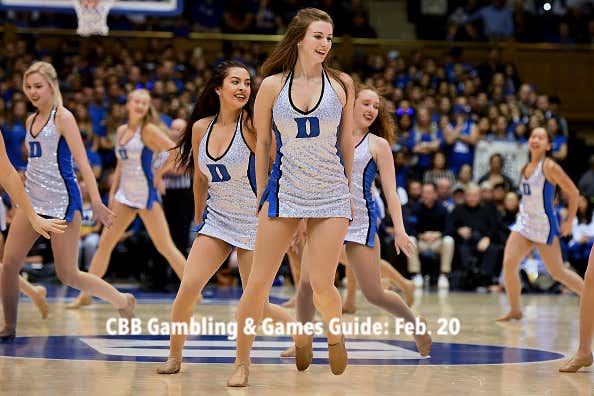 Welcome to the college basketball gambling and watching primer. We’re going to mimic similar to what JackMac did for college football as the focus on the weekends have shifted to college basketball. I’ll be giving out my picks, previewing games and letting you know what you should be watching on these 12 hours of Saturday basketball.
Twist – tonight’s slate is too good not to put a blog together.

Here’s the thing. I have no idea how UNC tries to slow this game down. It’s not what UNC wants to do but it’s the best way to try and beat Duke. You don’t beat Duke running with them. That’s where they are their best when they can get out in transition.

Ultimately, I don’t know how UNC guards Zion. Luke Maye is nowhere near quick enough to stick with him, but that’s the lineup that Roy prefers. He’ll have to switch to the small ball lineup to have the best lineup against Duke and this is a good litmus test to see how much he’s willing to do that. You probably want to put Nassir Little on Zion, but again, it’s taking Roy out of his comfort zone. Plus, I don’t know if UNC is good/smart enough to run a gap defense to limit the drives from Duke.

The next matchup to watch is going to be Tre Jones vs Coby White. Jones is one of the, if not the, best guard defender in the country. We saw White struggle against Ashton Hagans, who is a great on ball defender as well. White’s ability to get open looks or break down Duke’s defense is going to be key for UNC’s offense. If they go small, attacking Marques Bolden on the perimeter with ball screens and pick and pops with Luke Maye will be key.

The other thing is Duke seems to get up for these marquee games. Yes, they lost to Gonzaga. But, Kentucky, Virginia (x2), St. John’s, Indiana, etc., they’ve went out and put up impressive performances. At home? Yeah, I think that trend continues.
Pay the players pick: Over 164.5

Rutgers at Michigan State – 6:30pm (Michigan State -17/136.5)
Michigan State looks like a top-10 team when healthy. Michigan State currently isn’t healthy. They are without Josh Langford for the year. Nick Ward is out what appears to be 3-5 weeks. That’s 2 of the top-3 guys heading into the year. Even with Cassius Winston looking like Big 10 POY, Sparty needs some help.

They played earlier this year at the RAC and it was an 11 point game. I think you see something like that tonight. Rutgers tends to take the air out of the ball, playing average tempo offensively and slowing you down a ton defensively. Against a team with better talent, they should take the air out of the ball even more. Now, the fear is Rutgers scoring enough since Michigan State’s defense is damn good. However, this is an injury play.
Quincy Douby might walk through that door pick: Rutgers +17

St. John’s at Providence – 8:30pm (St. John’s -1/142.5)
We’re going to focus on a couple Big East spot plays here. Simply put St. John’s is coming off probably its biggest win of the year – a come from behind victory over Villanova. That seemed to lock St. John’s into the NCAA Tournament for now. Now, they go to the Dunk to play Providence – a team that won by 14 in New York already.

What was weird about that first game is Shamorie Ponds got his and was fairly efficient. He had 20 points on pretty much 50% from the field. However, Mustapha Heron didn’t play in that game. But, this is a spot play. This feels like a let down spot for a team that hasn’t been great on the road.
David Duke is a basketball player pick: Providence +1

Butler at Marquette – 9pm (Marquette -6/145)
Another Big East spot play. If Marquette wants a chance to win the Big East title, they have to hold serve at home. That includes beating Butler, a team that is middle of the pack this year.

Again, these two teams played earlier this year with Marquette winning by 20 at Hinkle. They are even better at home, 15-1 on the year. Low key, Marquette’s defense continues to be tough this year. That was always the question coming into the year. In the earlier game they held Butler to .85 PPP, 40% from 2 and 23% from three. I don’t think it’ll be that bad tonight, but it shows that Marquette can defend.

I’ve talked about it before, but the way to defend Markus Howard is using length – i.e. a Justin Simon. Butler doesn’t have a guy like that to put on Howard. If Baldwin is on him, Howard is going to get his shot off. Marquette runs those drag screens and double screens where a Hauser brother can pop and John can dive. That will lead to plenty of open looks.
Jump Around Guy Pick: Marquette -6