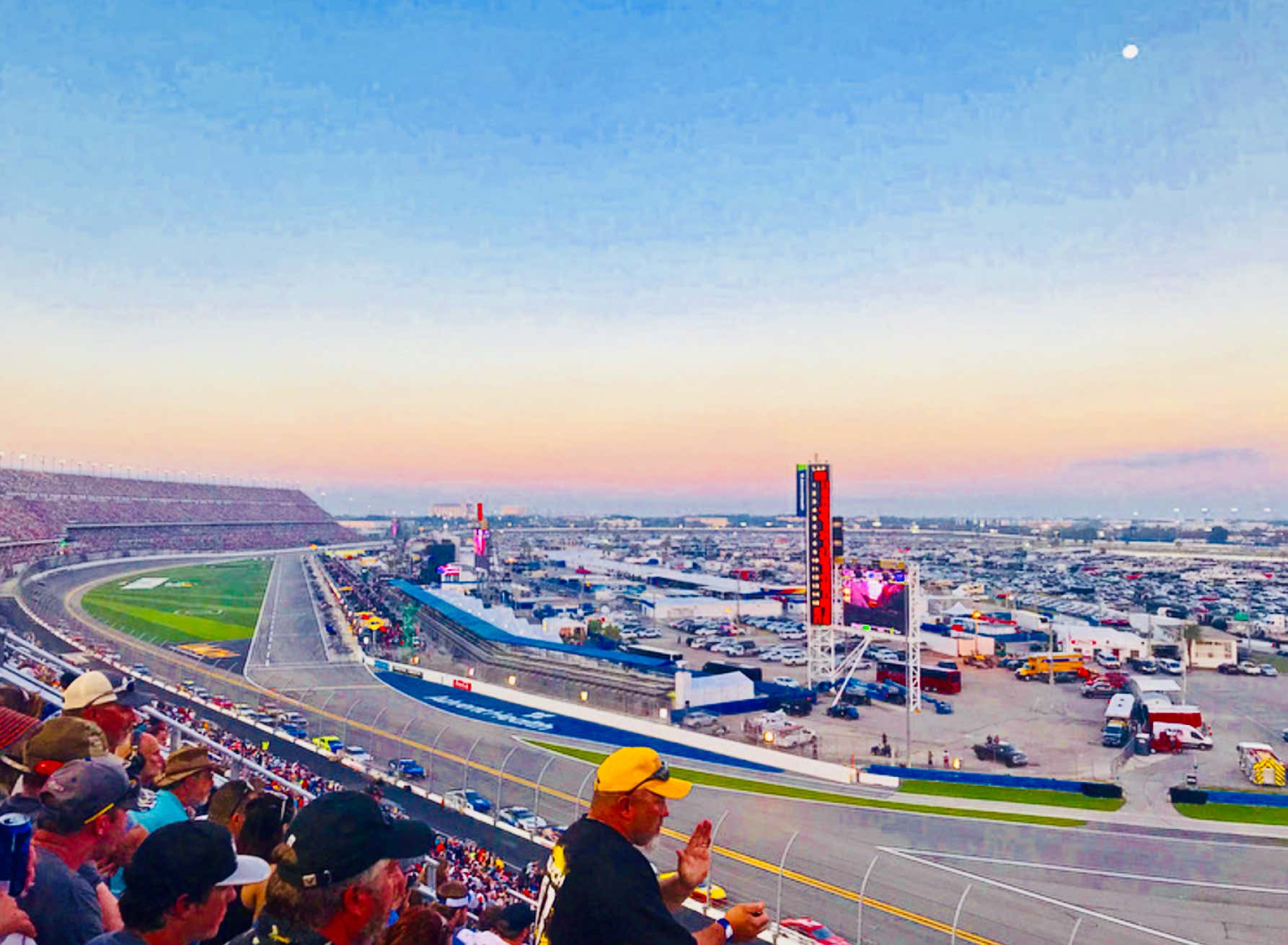 Looking out from atop the stands with a hot dog in one hand & a cold BuschHHHHHHHH tall boy in the other, it felt more like a Friday than a Sunday night. It was 80 degrees with a soft breeze carrying the faint, salty smell of the nearby Atlantic, and the Goodyear Blimp lazily floated by between a full moon & Lake Lloyd.

The setting sun had cast all 180 acres of infield revelers and their RVs, tents and cars in an orange-pink pastel glow, and the only thing disrupting this peaceful scene was the roar of engines that crescendoed every few minutes as groupings of souped-up race cars whirred past our seats at 200mph.

After exchanging some observations with Caleb & Spider, who were sitting right behind me, I took a long sip and settled in. 110 laps down, still 90 more to go (not counting over-time, which I didn’t know was a thing yet), & we were completely content with that.

Ever the hype-man, Spider started to cheer loudly for his Italian brethren & current NASCAR champ, Joey Logano in the #22 Mustang, as the laps dwindled down to the end. Feeling a presence looming over us, we turned around as a bearded, Hagrid-esque man in a faded, cutoff-sleeve #4 Kevin Harvick shirt leaned towards him and yelled,

“FUCK JOEY LOGANO! I SHOULD STUFF YOU IN A TRASHCAN!”

This evoked cheers from others around us.

Seeing Spider’s confusion & the delighted grin on my face, fans informed us that some find extreme joy in hating Joey Logano, who they feel comes across as reckless & entitled. After only a weekend there, you learn that NASCAR relationships behind the scenes are their own soap operas that are almost as entertaining as the races themselves. (He’s probably a lovely guy.)

This giant gent was all in on that drama, but aside from ripping on Spider every few laps or so, he also took the time to answer any questions we had & explain situations that were unfolding on the track; A really kind fella so long as “that asshat Logano” was not mentioned.

The closer it got to the finish, the more crashes started happening and our slightly-scary new friend told us not to worry – this was totally normal. As someone who gets anxious driving her 2003 Honda at 35mph across the GW Bridge, this felt far from normal.

When ‘the big one’ hit, my arms shot out in that “mom seatbelt” move, hitting the strangers on either side of me. Rows of cars slammed into each other, tires screeched, and flames & sparks exploded as the pile disappeared into a haze of smoke. The guy to my right excitedly showed me the shots he’d just captured on his telephoto lens camera; up close it looked like cars driving through hot orange lava.

Miraculously no one was seriously hurt but the crash (paired with watching an elderly couple precariously make their way down the bleacher steps) had me stressed; It was time for another beer & a smoke break.

Under the bleachers on a cement balcony, I chatted up others who’d also come out to stretch their legs while the wreck was cleared. In a party atmosphere I met a group of local Army vets, cheers’ed a couple Barstool fans who’d been at our live show, & hung with a bachelor party comprised of 25 cricket players from England. It was also their first race & they agreed that it’s one of those things you have to go see for yourself. Then they picked me up & held me like a giant, sweaty tuna.

Back at the seats the crowd stood and went wild as the race re-started, and this cycle continued several more times until only 16 of the 40 original cars remained. The stands stayed packed until the #11-car driver, Denny Hamlin, crossed the finish line to checkered flags & drove onto the grass to whip donuts on the massive ‘DAYTONA’ logo.

As Denny & his team went to celebrate victory at Steak ‘n Shake, I filed out with the huge crowds & met back up with some of our Barstool crew (Captain Cons + sales & video folks) to celebrate my newfound expertise & love of NASCAR. Everyone was in a great mood & the mojitos were flowing like water. Someone suggested we hit up a shady Daytona dive bar they’d passed a few times & it sounded perfect for my vibe. There was 1970s carpeting, you could smoke inside, and the owner was absolutely batshit crazy.

At one point after giving us generic tequila shots, he leapt up onto the bar out of nowhere and, despite no one mentioning her & her music not playing at all, screamed,

“I SAW CHERYL CROW LIVE AT THE HARD ROCK CAFE ONCE!”

Wild flex. And worth noting, as he screamed this he also sprayed a Budweiser all over the bar like a bottle of champagne while holding it in front of his junk.

We were leaving for the airport the next morning at 7:30am but I couldn’t bring myself to call it a night as local characters kept coming onto the scene…

A biker who looked like he wanted to kill Cons for sitting on the bar in his pink polo, a pro-drummer who kept making out with his wife, an older guy who I thought was trying to wrestle a beer from my hands when he was really just trying to dance…

Before finally getting dragged away, I knew I had to leave a memento of the trip. In a moment of peak professionalism I unclipped the ol’ boob holster & hopped up to toss it with a row of frayed counterparts whilst yelling something about “goin’ faaaast”.

Monday morning’s alarm came too soon.. My head pounded & my voice was gone, but the hangover was well worth it.

Over the course of 2.5 days I got to see Jacksonville, St. Augustine, & Daytona with ZBT & record a podcast behind a dumpster area with them, rode twice around the track in a pace car with racer & Navy reservist Jesse Iwuji at the wheel, interviewed Kurt Busch about his promise to give away 100 free tickets to veterans at every race this year, had a beer with Austin Dillon at his team’s RV and saw his crew chief’s butt tatt, got up close with Corey LaJoie & his hairy car, signed the yellow lines on the track, took the stage at our live show, met tons of awesome Stoolies, was reunited with Larry the Bus Driver, & so much more.

NASCAR went all out for us, the race was exciting, the drivers & fans were easy-going, & it made a huge impression. Despite being back in New York without my voice & one of my favorite bras, I’m already looking forward to the race at Charlotte over Memorial Day Weekend. I’m all in.

***Denny Hamlin, if you’re reading this – congrats on the Daytona win & thanks for stopping by the office today for PMT & doing a pizza review with Dave. While you’re still in NY please let me know if you’d be interested in doing a segment called “Ham-ing It Up With Denny!” where we get ham together at a Denny’s.

****If anyone wants to listen to our ZBT dumpster podcast, you can listen HERE: