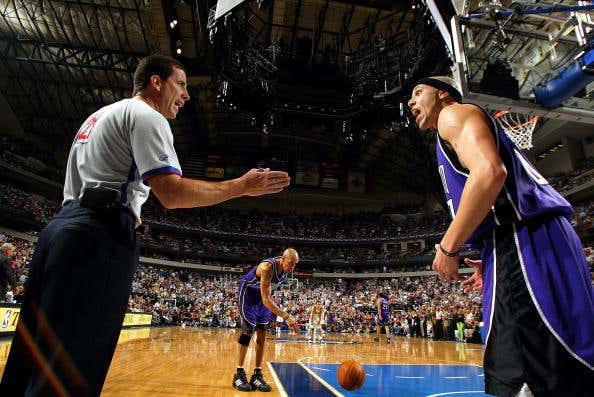 [ESPN] – James “Jimmy” “Bah-Bah” “The Sheep” Battista was a stressed-out, overweight, Oxy-addicted 41-year-old, in the hole to some underground gamblers for sums he’d sort of lost track of, when he settled in to watch an NBA game for which he believed he’d just put in the fix. It was January 2007. A month or so back, not long before Christmas, he’d done something audacious: He’d sat down and cut a deal with an NBA referee. Now he feared the scheme had become too obvious.

“You wanna get paid?” Battista had said to the ref. “Then you gotta cover the f—ing spread.” The bribe was only two dimes, $2,000 per game-an outrageous bargain. If the pick won, the ref got his two dimes. If the pick missed, the ref owed nothing; Battista would eat the loss. A “free roll,” as they call it. But this referee didn’t lose much. His picks were winning at an 88 percent clip, totally unheard of in sports betting for any sustained period of time. They were now entering the sixth week of the scheme-what you might call a sustained period of time.

You want to get paid, you gotta cover the spread, Battista had told Donaghy. But Battista never used the word “fix.” Or “influence” or “manipulate” or in any way discussed the mechanics of fixing.

“There wasn’t no need to,” Battista has told friends. The whole thing had been merely insinuated, a matter of strong innuendo. “The only mechanics, he had in his hand. He had the f—ing whistle.”

First off, what an unbelievable line that is. It’s so specific but now imagine you’re being told this when you’re trying to fix a game. Yeah, no shit, I have to cover the spread. But, I’m still freaking the hell out if someone tells me that.

I’m still fascinated by the Tim Donaghy story. I feel like more details continue to come out despite it being an old story now. It’s one of the crazy stories out there too. How many times have we seen a true point-shaving scandal? The Black Sox. CCNY basketball. Kentucky, Arizona State, Boston College hoops. But, none to this level.

Here’s the crazy thing and the one that people still sort of point at. Was Donaghy truly a lone wolf in this situation? Do we really think Donaghy was the only ref to fix games? On top of that do we think it was limited to just the NBA?

The story linked at the top of the blog is worth the read. It goes in depth about how the communication happened. There would be a liaison between Donaghy and who he’d place bets with. They never used the term ‘fix’. It’s all just other buzz words and how he tried to circumvent the system.

Also, of course he was from Delco.