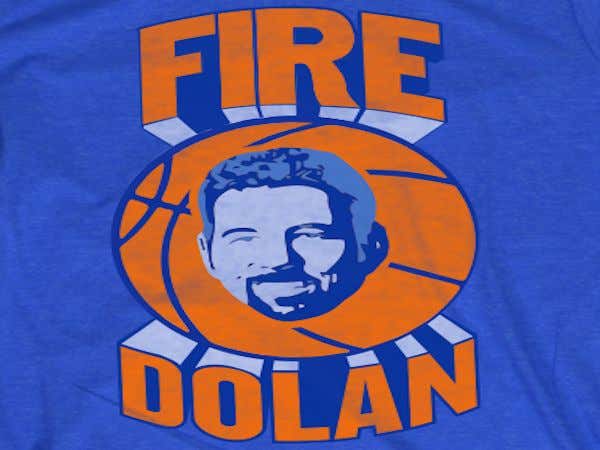 Forbes- In his most recent podcast, which was recorded Sunday night/Monday morning, The Ringer’s Bill Simmons had a surprising scoop on the state of the New York Knicks. According to Simmons’ sources, owner James Dolan is seriously considering selling the Knicks. “Multiple people told me this, who know things. James Dolan is courting offers for the Knicks,” said Simmons. “It’s happening. It’s on. It’s go-time. He’s courting offers for the Knicks. That’s what I heard at All-Star weekend from people I trust.”

“This is what I’ve pieced together. [Dolan] really cares about the buildings and the in-game/in-concert experience. And he wants to put even more money into that,” Simmons explained. “The Knicks are just a pain in the a–, people s–t on him for it. He feels if he can just sell the Knicks for some crazy price, then he can put the money into that music/in-game experience stuff that he cares about. So, the Knicks are available.”

Look, I know we have been hearing about these rumors that James Dolan will sell the Knicks for years now and one more tickle of the balls shouldn’t really do much for us. But it’s hard not to get excited about this latest report considering Dolan was literally the Knicks biggest road block to signing free agents. They have the cap room, they have the market, they have the legacy card since people still care about this franchise despite being trapped in darkness for decades. All they have hanging over their heads is a kazoo playing clown shoe of an owner. But the more smoke we hear about Dolan looking to sell the Knicks, the more we have to believe that there is a fire burning somewhere at MSG and I’m not talking about the riots that will occur if the Knicks use their cap room on Boogie Cousins and Khris Middleton this summer.

Which is why I don’t even care if these rumors are 100% accurate or not regardless of how little Dolan meddles now. The thought of Dolan POTENTIALLY selling the team has to help the Knicks’ cause when it comes to recruiting free agents. I mean at a certain point, it has to be tiring to be the most hated man in a city of millions. The Knicks were once again the most valuable NBA team despite being a dumpster fire to varying degrees since Y2K. If Kazoo Jimmy can just sell the Knick for billions, I personally promise that myself and those millions of Knicks fans will let bygones be bygones and end our vendetta against him instantly, regardless of how awful he was as an owner and to Charles Oakley. Hell, I’ll even take him off my Hiss List for good and buy every JD & The Straight Shot album that made it to iTunes as a sign of peace. All he has to do is cash in on a deal that my shitty blogger brain cannot even fathom. And if Dolan somehow agrees to sell the Knicks before the lottery? There won’t be enough ping pong balls in the world to prevent Zion from becoming a Knick after that bump in good juju.

P.S. I feel like Andy going through one of Red’s competitors to get him a harmonica while sourcing this blog to one of Portnoy’s biggest competitors. But I hold myself to only the strictest AP style sourcing guidelines while blogging here at Barstool. That’s my promise to you, the reader.