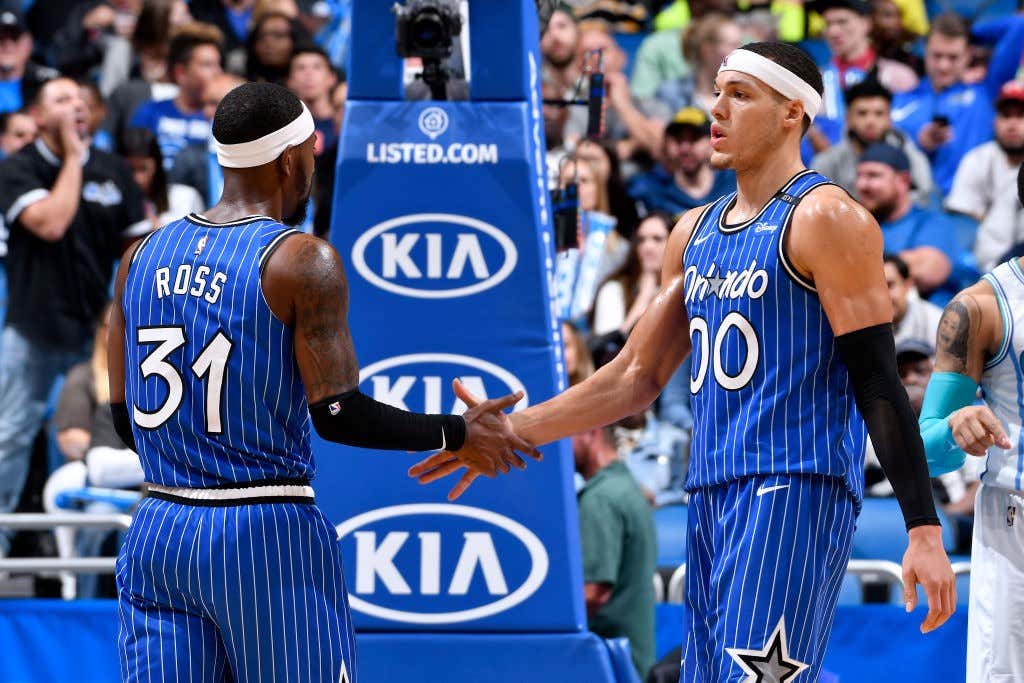 Good morning everybody happy Friday and welcome back to another edition of Last Night In The NBA where we bring you up to speed on everything that went down from the night before in the Association. With last night being the final day of games before the All Star break officially begins, it was a relatively light night with just 3 games on the schedule. On to of that it was mostly a night of blowouts, but the interesting part was you could make the case that all three games were upsets. I wouldn’t blame players for looking ahead to their vacation, and obviously this is the NBA so you know there has to be some drama before everyone goes their separate ways for a week. If you were out celebrating Valentines Day and didn’t get to see any of it that’s OK, here’s what happened.

OK this may sound crazy, but I’m starting to think the Magic could really end up making the playoffs. I know they are 5 games under .500, but remember this is the East we’re talking about. Not only are they just 0.5 games back of the 8 spot, they’re just 3.0 back of 6th! That’s what happens when you have the second longest active winning streak in the conference at 5, and all 5 wins have been by double digits. You then come out before the break and beat a playoff team by 38 points, and your last two wins are by a total of 38 points, you deserve a little praise.

The Magic jumped out to a 15 point lead early, and never slowed down scoring 71 points in the first half. This had to be one of their best offensive showings of the season, finishing with 52/43% splits and 17 3PM, and considering the Hornets had beaten this team 13 straight times I imagine this one felt pretty great. This is a Magic team that has now beaten every single team in the top 8 in the East, and while they would certainly be a massive underdog in any first round series, I feel like they may play a team tough. They decided not to be sellers at the deadline and keep both Vucevic and Ross, and it looks like that is paying off for them.

For CHA, not the best way to enter the break dropping two straight, but they are fortunate enough to remain in the 7 spot for the time being. Not really much you can do when your offense disappears like this, just 35/12% splits with Kemba leading the way with a brutal 4-20 (0-7) performance. Outside of Malik Monk there really wasn’t all that much to cheer for as a Hornets fan

But I will say everyone did look pretty damn good in their throwback jerseys. I don’t know why both of these teams just don’t make them their regular uniforms. I will say the Hornets should have also had stripes on the shorts but whatever, both were fire.

Hey, it’s hard to lose 19 games in a row. Sometimes you’re going to fall ass backwards into a win that you most definitely don’t want, and that’s what happened here for the Knicks. Now before any Knicks fans go crazy, it’s OK, you technically could afford to actually win this game. As of now NYK is still slated in the 2nd lottery odds spot, with a 1.0 game over CLE for 3rd and a 3 game lead over CHI. Barring some sort of weird post All Star break winning streak, they are not exactly at risk of falling out of the top three just yet. The Bulls are also winning games right now for some reason so no need to panic.

Instead, take this opportunity to enjoy the performance of some of the young guys

The Knicks got out to an early 15 point lead, and even with their efforts to immediately give it right back in the second quarter, the Hawks tanking effort was simply too strong. Did you know that 7 of the Knicks 11 wins this year have come on the road? In a weird season, that may be the weirdest fact of them all.

For ATL, I mean at this point I’m not sure they know what they’re doing. At 19 wins they are way out of the tanking race, so how are you going to lose to the Knicks at home. They aren’t going to catch CHI, they have a huge lead over MEM, so I guess their only role here is to play spoiler for every other tanking team. They had strong performances from guys like Young and Dedmon

and it’s pretty clear that even against a team like the Knicks, scoring just 40 points in the second half wasn’t going to get it done. They finished with 36/26% splits and are probably relieved to finally be at the break.

I told you, this was a weird night. You would think that if then Pelicans were able to beat the wagon that is the Thunder at home that they probably got a big night from AD right? Wrong. He finished with 14 points before he left with a “shoulder injury” in the second quarter that we learned today is “nothing serious”. Yeah no shit. So how did they pull this off? Well mostly because both Jrue Holiday and Julius Randle were unstoppable

You have to give NO credit, they hung with OKC the entire way, showed up in the fourth quarter, and turned in one of their best offensive performances of the year. Basically if you were a Pelican and you stepped on the floor lat night you played well, that goes for the bench too that put up a combined 35 points on 15-20 shooting. After the game Alvin Gentry gave an A+ interview basically admitting things are a complete disaster, and he seems like a man who is tired of the AD bullshit

Great win to head into the break sure, but it obviously doesn’t change all that much about their current situation.

For OKC, man, a lick of defense would have been nice. Pretty unexpected performance from a team that was playing some of the best basketball in the West over the last 10 games, they had won 11 of their last 12 heading into this game but you give up 131 on the road I’m not sure what you think is going to happen. It was really a three man show for the Thunder with George/Westbrook/Noel carrying 90% of the offense

and it was a weird off night from deep for the Thunder who shot 10-44, with George having the toughest time turning in a brutal 3-17 from deep. Chances are he doesn’t shoot like that again, so as an OKC fan I’m not stressing. Down 2 games to DEN for the 2nd spot, but they are still in a great position and head into the break playing good basketball. It’s just shocking to see at team so good on the defensive end give up this type of a performance to a team that’s in total disarray.

And that’s it! You’re now all caught up with everything that happened last night in the NBA. We’re off for a week with the break, but we’ll have everything from All Star Weekend covered on the blog. Hopefully this helped you ease into your Friday, have a great day!