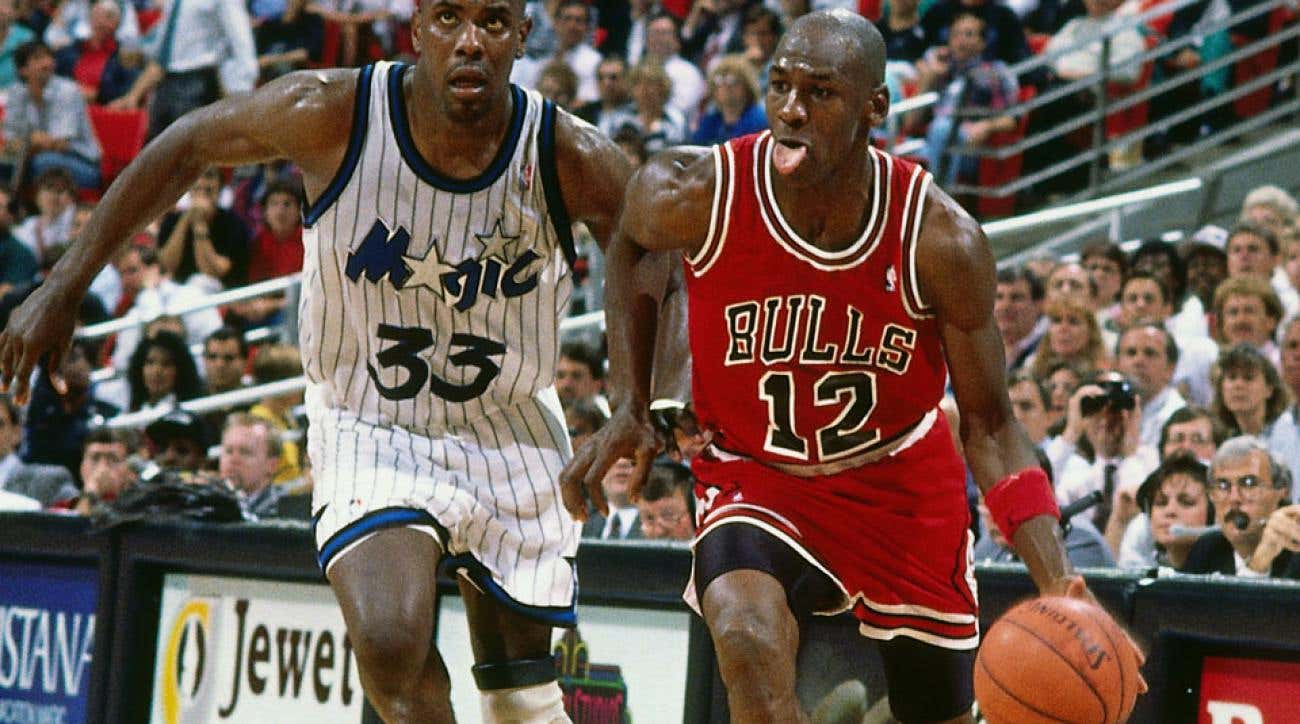 Wearing a spare jersey with #12 on the back, Michael Jordan scores 49 points as the Chicago Bulls are stunned by the expansion Orlando Magic 135-129 in overtime, ending a forgettable 1-5 road trip on a sour note. The number switch was due to somebody stealing Michael Jordan’s regular uniform after the team’s shootaround and before the game, with no other spare jerseys to use.

As the 1990s began, Michael Jordan was becoming the face of the NBA. By 1990, Michael Jordan already had won an MVP, a Defensive Player of the Year Award and was well on the way to winning his fourth straight scoring title. While the Bulls dynasty was still a year away, Jordan had become the best player in the league. He had also been the best player in the NBA, with his Air Jordan’s and #23 jersey being among the best sellers in the world.

The 1989/90 Chicago Bulls were a team in transition in their first season with Phil Jackson as coach. Not quite strong enough to win an NBA Championship the Bulls were showing steady improvement as they had a record of 28-14 as January came to a close. The Bulls would spend the first two weeks in February on the road, wrapped around the All-Star Break. Heading into the break the Bulls suffered four straight losses, starting with an ugly 139-112 loss to the Houston Rockets. That was followed by a 112-111 loss to the San Antonio Spurs, a 121-103 loss to the Los Angeles Lakers and a 123-98 loss to the Denver Nuggets.

Following the All-Star Game in Miami, the Bulls got back on track with a 107-95 win against the Miami Heat on February 13. One night later on Valentine’s Day, the Bulls came into Orlando to face the expansion Magic to finish off their six-game road trip. Sometime between the morning shootaround and game time, Michael Jordan’s uniform was snatched out of his locker. Several arena workers and security at the Orlando Arena were questioned but the jersey was gone, and there were no other Jordan jerseys available in this the final game of a long road trip. With no other option but a spare jersey that had no name and the #12 on back.

The Orlando Magic were in their first season, holding a record of 14-33 under Coach Matt Guokas as they played their first game after the All-Star Break. Wearing #12, Michael Jordan had a strong game, with a game-high 49 points, adding seven rebounds. However, it was clear playing on back-to-back nights, Chicago had grown road weary as they were outscored 36-25 in the fourth quarter, allowing the first-year team to force overtime. In overtime, the Magic outscored the Bulls 17-11 to record a 135-129 win. Leading the way for Orlando was Terry Catledge who scored 34 points while Reggie Theus a former Bull added 28 points.

The mystery of the missing jersey was never solved, as the Bulls returned home and won nine straight on the way to posting a record of 55-27. The Bulls would go to the Eastern Conference Finals for the second year in a row, losing to the Detroit Pistons. The Orlando Magic meanwhile went 18-64 in their first year of existence. Michael Jordan would briefly wear #45 after ending his first retirement but never wore #12 again.