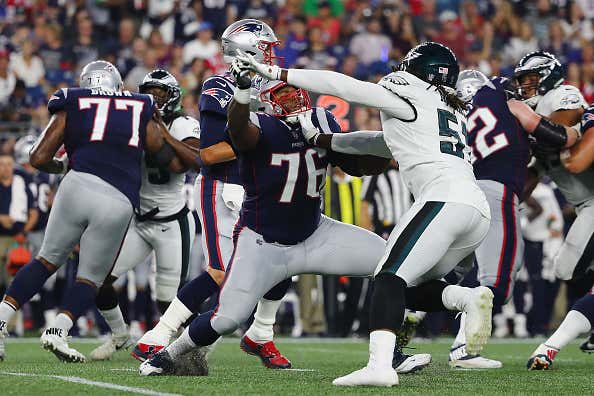 As we begin to contemplate climbing out of the warm, comfy bed of the Patriots magical sixth Super Bowl win to shit, shower, shave, get dressed and begin work on the glorious seventh, there are a couple of points that shouldn’t be overlooked:

1. The Pats overcame more injuries last year than we remember.
2. They can get better without having to do a whole hell of a lot.

Those two points go hand in hand. Yes, they got lucky with injuries in a few key areas. The secondary remained largely injury free right up until Pat Chung was lost in the Super Bowl with what I can only assume was a chainsaw massacre. And the quarterback obviously used his wife’s witchcraft to play all 18 games and look as good at the end of the year as he did at the beginning.

Other than that they lost players they were relying on to be major contributors at every other level of their offense and defense and still found a way to be the best team in football. That’s just a point that needs to be made going forward. Just because we get to enjoy the spoils of winning the Battle of the Bastards,

…doesn’t mean a lot of Stark blood wasn’t shed to get them there.

Last offseason was as bad as any we’ve been through when it came to losing free agents. And they expended an ass ton in terms of bringing in veterans and spending draft capital to replace them. But three of those veterans got injured before they ever got the chance to contribute and by Week 3 only Sony Michel remained from their entire rookie class. And in case I haven’t mentioned it enough … they still won.

The NFL is still figuring out its overly complex, Enigma Code-like formula for awarding Compensatory picks, but the Pats are expected to get two in the 3rd round (the 2nd and 6th highest awarded) and a 5th for the free agents they lost last year. To go along with the 32nd, 56th, 64th and 74th they already have. So there’s that. They will undoubtedly use them to move up and down the board during that Day 2 sweet spot that sparks more joy in Bill Belichick than Marie Kondo folding laundry.

Which will be great. Few things make me happier than them reloading in the draft. Even in the years their picks get taken away over nothing. But to my second point, they can get better merely by bringing back some of the veterans and rookies they lost early last year. In reverse order from least important to most:

God knows Honey Nut Berrios is no sure thing. He’s listed as 5-9, 190, but in camp he looked a good half a helmet shorter than guys like James White and Julian Edelman. And as the 210th overall pick he was a longshot to make the roster before he got hurt. But if ever there was a team with a genius for getting production out of undersized, overlooked slot receivers, this is it. And he had so much more production in college at a big school against top competition than a hundred Welkers and Amendolas, it’s hard not to see a potential folk hero who could sell a billion t-shirts someday.

I’m not supremely hopeful the NFL will let Straight Flash Homie back on the roster. Based on what little I know about their Substance Abuse Policy, which is longer and under by fewer people than an Apple User Agreement, I think he’s eligible to be banned for this lifetime and the next two after it. But a cursory look at his Instagram shows he’s still posting like he expects to be back. It’s all about the ring, his teammates, and filled with more inspirational quotes than the magnets on your mom’s refrigerator. So maybe? If he does get to play even part of the season, I wouldn’t bet on him lasting to the end or recommend anyone buy a No. 10 jersey. But there’s no doubt he’ll be productive as hell for whatever period of time he is in there. Regardless, I’d make sure someone keeps checking whatever he’s drinking at Mr. Kraft’s ring party.

Hill is still just 26 years old. An occasionally productive veteran with a season of 1,100 yards and another with a league-leading 11 Rushing Touchdowns. He was expected to be part of a rotation of running backs along with Michel and Rex Burkead before he was done for the year after just four carries for 25 yards. Clearly Michel established himself as the closest thing this offense will have to a bellcow back, with Burkhead as a change-of-pace. All Hill needs to do is be that third option that they lacked last year. That 230lb inside punisher that Mike Gillislee never became. And if he does so, he can shut up the Bengals fans who’ll never forgive him for that fumble on the Pittsburgh 26 with under two minutes in the playoffs.

I love the idea of bringing back a guy with so much to prove.

For me, this one is very much personal.

Dawson was another pelt on my saddle when it comes to successfully predicting Patriots draft picks:

Who the Patriots Will Draft: Duke Dawson. I’ve seen mocks where he goes as high as 48, but as low as 98. If teams pass on him due to his size and the fact he’s not a true outside the numbers corner, I can definitely see the Pats moving around the Day 2 draft board to grab him. In spite of my Pennywise-level fear of guys from U. of Florida, he’ll fit in perfectly as a slot corner and the Robber role, as well as become a core-4 special teamer from Day One. Duke Dawson is the pick.

Despite being put on revocable IR and getting re-activated in mid-November, Dawson never saw the field. In spite of how well the secondary played in the playoffs overall and against the Rams in particular, there is never not a need for a slot guy who can play special teams. I can’t wait to see him in a major role next year.

How’s this? You lose your No. 1 draft pick, 23rd of the entire draft and the guy you’re expecting to anchor your O-line for the next 10 years, in a freak, non-contact Achilles injury in a preseason fauxball game, and you have the best season out of your line in a generation. I love Trent Brown. I hope the Pats re-sign Trent Brown. But Trent Brown is a Super Bowl-winning starting left tackle who made $500,000 last year. Nate Solder made 70 times that, just in guaranteed money alone. If they do lose Brown to a team as reckless with their money as the Giants (likely), then they’ve got just the guy ready to step in. If they somehow keep Brown, they’ve got a 1st round talent with big school experience at every position except center. Talk about a Champagne Problem.

Simply put, and I say this without fear of contradiction, at the time Bentley was lost for the year, three games into the season, he was not only the Patriots best rookie, he was their best linebacker. Dont’a Hightower was struggling. Kyle Van Noy and Elandon Roberts were doing OK. But Bentley was already establishing himself as a reliable, inside thumper who could cover all 53 1/3, playing a lot faster than the scouting reports out of Purdue suggested. It goes without saying the LB unit improved as the year went along and played their collective ass off in the postseason. I just cannot wait to see how much they can improve with an athlete like Bentley in the mix. Especially given that he came into the league already seeming to grasp this system better than Hightower did as a rookie.

OK, I just officially got ahead of myself. Deep breaths, Thornton. There’s a whole offseason of roster turnover to go through before I start giving myself training camp boners. There’ll be time for that in about six months. But there’s no question in my mind the future is still very bright for this team.