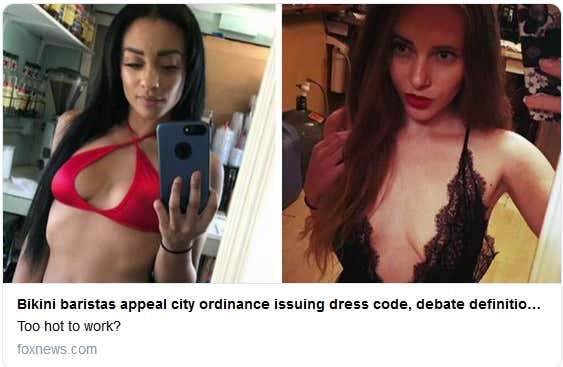 Jovanna Edge, owner of Hillbilly Hotties, one of several bikini barista coffee shops involved in the suit, and attorney Melinda Ebelhar argued that the order was intentionally vague and would be too difficult to enforce. …

According to the ordinance, employees who work at fast food restaurants, food trucks and coffee stands are required to wear at least a tank top and shorts while at work. …

Judge Sandra Ikuta [dis]agreed, stating she was concerned customers would see the women working as saying: “I am sexually available,” the Herald Net reported.

According to the publication, Ebelhar defended the baristas’ choice of outfits as personal expression, female empowerment and a form of body positivity.

This is a proud day for the American Judicial System. One of the greatest in a long list:

1954: Brown v. the Board of Education rules racial discrimination in public schools is unconstitutional.

1966: Miranda v. Arizona requires all persons in custody be informed of their legal rights.

It’s hard to overstate the scope of this decision and the impact it will have on society. Imagine a world where amphetamine-doped long haul truckers could be exposed to toxic levels of ass crack as they stop for a breakfast sandwich. Where drunk college guys horking down tall stacks of banana pancakes and sausages they’ll later hurl all over the dorm seeing these servers and getting the subliminal “I am sexually available” message. Where coffee consumers are forced to look at the undercheek side of a barista’s buttocks. It could be the end of civilization.

Or not. I’m not enough of a constitutional scholar to know. Or to even hazard a guess as to where the judges will come down on this landmark decision. Just that as a general rule, I’m with Attorney Ebelhar’s argument about personal expression, female empowerment and body positivity. I’d probably not go to a Dunkins where I’d be staring at the butthole of the server. Any more than I’d order the coffee at a strip club. I think those are things that ought not be mixed. But that’s just my personal choice. If consenting adults want to show/see the lower half of anal cleft over a Macchiato, that’s their choice and no one says I have to go there.

So do the right thing, judges. This is what those boys at bled the ground red at Lexington & Concord for.