I know this blog is now a couple days old, but I don’t think anyone else has covered it yet.

I was at work for a stretch on Wednesday, doing whatever it is I do, when my lovely bride called and told me she had the plumber stop by the house to check on the hall toilet that has been running 24/7 for the past 3 weeks.

I have been putting this off because when it comes to home repair, I immediately hope anything broken in the house has some sort of Wolverine ability to heal itself.

“Time fixes all toilets (hopefully).”
-Me

This ignorant hope started with my first car.  You see, I used to drive a 1978 Buick Electra that had many “pings” and “pops” that just sorta went away the more I drove her, and the ability of that old car to just keep chugging along with little-to-no upkeep apparently spoiled me.

So when I was made aware of this seemingly broken toilet a few weeks ago, I took the lid off the tank, jiggled some plastic shit around on the inside, and then told my wife, “Looks like the filter was loose.  I just tightened it, so let’s give it a couple days to see if she goes back to normal.”

I don’t believe any part of a toilet is actually called a “filter”.  As a matter of fact, I am sure there are no filters within a device that was expressly made to rid your house of organic waste.

My wife is also well aware that we don’t own the only toilet on earth with a filter, but she agreed to give it a little time before we searched for any professional help.

A few weeks passed, and apparently, the bride was fed up with the constant sound of running water emanating from one of our many bathrooms (for the record- I found it soothing), so she called a plumber that we are friendly with, and he gave her an estimate on the repair.

Now I say we are “friendly” with this plumber, but he is not a “friend.”  This will become abundantly clear in a moment.

He said the toilet was fixable, he could bang it out the following day, and it would probably cost us “less than $300.”

If you couldn’t tell from the beginning of this blog, I really don’t know much about toilet repair, but $300 seemed steep, and before I could express that to my wife, she said to me, “Fuck Tom (the plumber)… I am going to see if I can fix it myself.”

The word “myself” was a welcome surprise for me to hear.  I thought for sure her sentence was going to end with “ourselves”, which changes the consequences of that statement dramatically.

“Ourselves” implies we’d be doing it as a team, and, even though I don’t identify as a male all of the time, most of the work and potential blame would’ve fallen into my penis-possessing lap because there is a (wrongful) assumption in most suburban homes that the husband knows more than the wife when it comes to home repair.

Check the YellowPages for “Handy Man” and the options are endless.

Now check for “Handy Woman” and it’s a single ad placed by an aggressive Asian woman in Leonia, NJ who is offering affordable handjobs.

But I didn’t get an “ourselves”… No, no… I received a very specific “myself.”  Which isn’t out of character for my wife.  She’s an independent and extraordinary woman, so if this plumber got her angry enough by trying to fleece her with a big price for a small job, it would not be strange for her to clap back and take the toilet into her own hands.

I left the office that day just before 1 PM… About an hour after I spoke to my wife.  On my drive home I got a text asking me to stop off at LOWE’S to pick up some plumbing.  She even took a picture and a video of the mechanism within the bowl she was going to fix as if I was some kind of fucking idiot who had no idea what to look for when purchasing toilet parts.

When I got to the plumbing section at LOWE’S on Route 17, I immediately asked a clerk for help since I am a fucking idiot who has no idea what to look for when purchasing toilet parts.

—  If your shopping online at LOWE’S use   http://lowes.com/podfathers   for additional savings… You’re welcome. —

I showed this guy a picture of the part and also a small video of that same part leaking water just moments ago.  He showed me the replacement part that I needed but told me that I probably didn’t need the whole thing…  I just need to replace the flapper.

When he said “flapper”, I must’ve looked at him funny because 1) Flapper is a funny, almost made-up sounding word.  And 2) He asked me if I had an idea what a flapper was.

I was embarrassed to tell him I thought a flapper was a female dancer from the 1920s so I just shook my head and mumbled, “No sir.”

He explained to me the whole inner workings of a toilet and how my $19 piece wasn’t necessary since a $4 flapper would probably do the trick.

I barely paid attention because of 3 reasons:
1. My wife was doing this herself, so I needed no knowledge of it for myself.
2. I know this clerk was in my best fiscal interest, but $19 is not a lot of money considering the $300 I coulda spent, and the $15 bucks I might’ve saved with just a flapper wasn’t worth the hassle if it wasn’t enough to fix my bowl.
3. The guy had terrible breath.

So… Nineteen dollars later, and I was on my way home.

When I got home Annie already had the water in the house turned off, the toilet open, and was using a siphon to empty the last couple of inches of water in the tank.  I wasn’t aware we owned a siphon, but apparently, we had it left over from when we had a pet fish.

—- I think I mentioned this before, but we owned a black goldfish named OJ Swimpson. —-

She siphoned out the remainder of the tank and followed a youtube video that outlined the steps to changing the guts of a toilet.

I looked into the tank and said, “Hey!… Where’s the flapper?”

And she let me know that our toilet didn’t have a flapper.  We had some sort of expensive flapper-alternative called a Hydro-Stop, and I immediately breathed a sigh of relief because I would’ve looked like a fucking idiot if I called an audible with the bad breath guy from LOWE’S and came home with a useless flapper.

Anyhoo… My wife was in jeans and a t-shirt and had her hair was tied back in a red Barstool patterned bandana (which I believe I brought home for the dog, but I ain’t saying shit).  She had a Rosie The Riveter look going on as she was on the floor wedged between the wall and the toilet with a monkey wrench in hand.  I was a tad excited by the whole look. 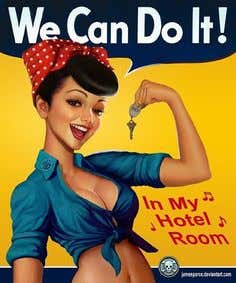 However, I had ZERO confidence in her ability to actually fix this thing, and I dreaded the fact that a $300 flapper installation would soon become a $2,000 cracked pipe replacement, so I left her alone in the bathroom while I walked the dog.

When I returned, she asked me to wait by the bowl as she turned the water back on, and flush when she gave the signal.

I did just that, and after the bowl filled up following the successful flush, we stood there waiting……………………

The bitch did it.

She got back down on the tile, just to tighten a few bolts before cleaning up, and as she was down there, I was overcome with a feeling of relief, pride, and straight up turned-on. 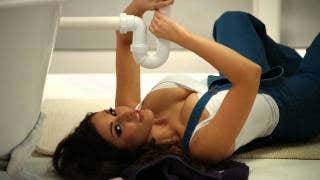 My only issue was that it was nearing 3 PM, and she was covered in toilet water, so after Annie politely turned down my offer for “3 Minutes of Fury“, I was left with no other choice but to self medicate while she scurried off to get the kids.

And THAT is how I spent my Wednesday afternoon.

Enjoy the weekend, everyone.

* Upon proofreading this blog for spelling and grammar errors (of which, there were nun), I realized that I advertently referred to both my beat up Buick Electra AND my toilet as either “her” or “she”… Is that sexist?

Last thing… It’s Friday, so another episode of Extra Large is dropping on Barstool GOLD today at 10AM.  I’m taping a couple more this afternoon, and it has been a fun process so far.

Check it out, please…