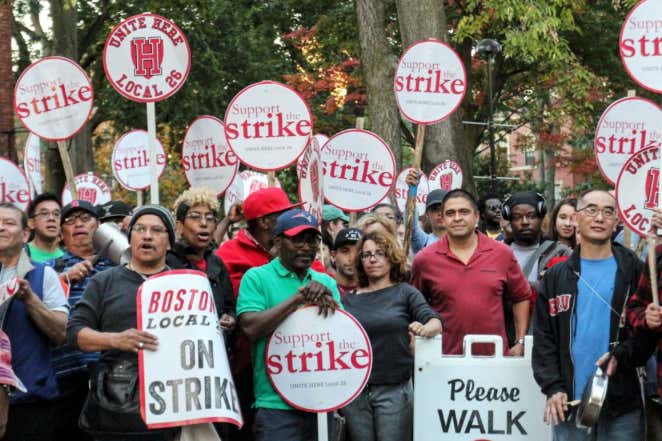 This is the most important blog I’ve ever written.  We’re balls deep in the 2018-19 MLB offseason, Cubs Convention and Sox Fest are a matter of days away and Matt Nagy just gave his offseason kickoff presser in which he (paraphrasing) said, “hey Cody.  Go fuck yourself.”

So now that we’re in the dog days of winter, I gots to thinking to myself, “hm, WSD what are the best offseasons in sports?”

Buckle up my friends.  We’re about to go on a wonderful journey.  Without further ado, here are the offseasons of the 4 major sports, ranked: 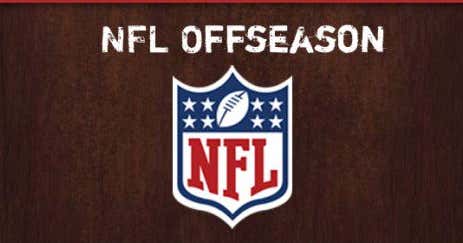 Without question the best offseason.  The combine in March, through the draft in April, through free agency, through training camp… football really has no offseason.  It’s drama, but it’s professional drama.  Not soap opera drama like the NBA, but fun drama like watching some quality network sitcom television.  Black Monday is always a real hoot when half the coaching staffs in football get canned and free agency always wraps up pretty quickly.  Then again there are the players that say GFY and hold out and all that.

Every notable free agent in basketball is signed by 12:01am the night NBA free agency starts. The NBA fucking blows, but they do make up some of it with their quick, painless offseason.  Did I mention the NBA blows?

It’s can’t be better than basketball or the NFL but it can’t be worse than baseball.  It’s #3 by default.

Now you’ll notice I used a random google image of “workers strike” as the thumbnail of this blog.  We will get to that in a moment.  But the MLB offseason completely and totally blows.  It is getting to the point where it’s inexcusable how bad MLB’s offseason flows and operates.  Teams and agents use the media as a vehicle to drive leverage, it drags, there’s hardly any drama at all.  It’s just bad, bad, bad, bad, bad.  Think about this for a second – Bryce Harper and Manny Machado are 26 years old.  They are getting the shit lowballed out of them.  I don’t know what they’ll end up signing for, but it doesn’t look like they’ll sign for anything close to 10 years or $300MM. Here is a list of the largest current contracts in baseball:

Now, I’m gonna say it louder so the people in the back can hear it (or however that stupid fucking saying goes)

HARPER AND MACHADO ARE 26 YEARS OLD.  Only A Rod was a more renown, yet younger free agent at 25 years old.  So why aren’t Harper and Machado getting fucking paid?  Isn’t there inflation and all that economic shit that should guarantee them $300MM deals, bare minimum?  It’s mind bottling.  And I’m pretty sure it’s going to cause a work stoppage when the current CBA expires a couple years from now.

Right in the heart of the Sox contending window.  Sweet.

But the above contracts weren’t albatrosses.  Actually they’ve all worked out as planned.  None of those players have won anything yet, but they are at least producing statistically for their teams, sans Pujols, who was the oldest in the list I detailed.

So what’s scaring teams away from the mega contracts?  Well, here are the preceding players on mega deals: 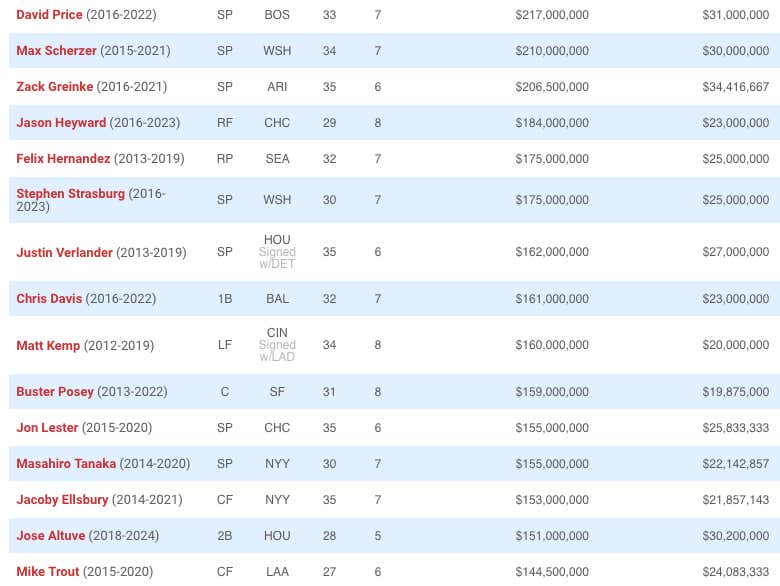 Trout, Lester, Posey, Altuve, Verlander and Scherzer are the only sure fire “good” contracts on this list.  The rest are albatross deals or players that are playing just “okay” with regards to their contractual expectations.  Not players you’d wanna drop 6-7 years of $20MM+ AAV on.

Which brings us back to Machado and Harper.  These guys are 26 years old.  Only A Rod was younger than these two when he signed his first free agency deal, and that was almost 20 years ago already.  It’s almost January.  Without looking, I’m guessing about 50% of MLB free agents haven’t signed a deal yet, and the offseason ends in less than a month, and a lot of the quality free agents like Keuchel, Pollock and Marwin Gonzales are still available.  What. The. Fuck?

Salary suppression is going to lead to a work stoppage.  I’ve never been so sure of anything.  It started with players like Mike Moustakas and Yoenis Cespedes getting boned in free agency because they had a qualifying offer attached to them and it’ll end with players like Machado and Harper getting boned because teams won’t ante up and use past precedent when they became free agents.  It’s a really bad situation right now.

And sure, some fans will argue that the market dictates players’ value.  We already know that owners and FO execs do. That’s why the Sox are “in” on Machado with only a 7 year deal on the table.  But while true, that will never, ever actually be accepted by the players or their reps.

I don’t know what’s going to change, but shit’s about to hit the fan.  Players can’t truly earn the “fuck you” money until they’re at least 30 in most cases, as teams have a guaranteed 6 years of control once a player’s clock starts. That, and MiLB salaries are shit anyways.  What I’m getting at is I expect a complete and total revamp of the current system in 2021, and if I were to guess, it’ll get really hairy.