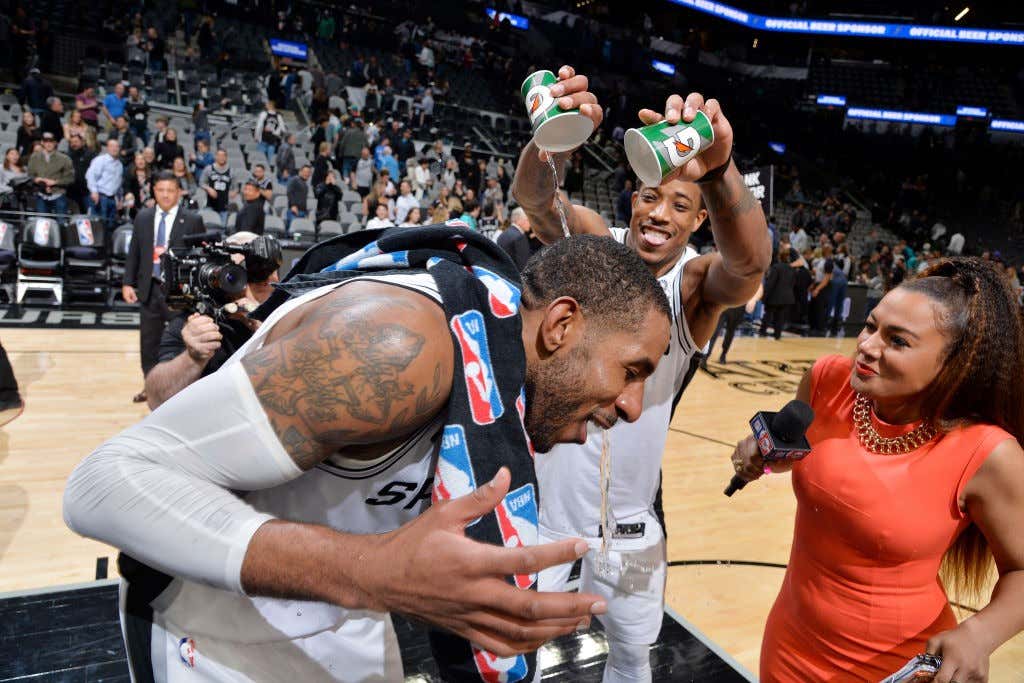 Good morning everybody happy Friday and welcome back to another edition of Last Night In The NBA where we bring you up to speed on everything that happened from the night before in the Association. It was a relatively light night of basketball on Thursday with just 4 games on the schedule, but they certainly did not disappoint. We had vintage performances, big man triple doubles, an incredible display of basketball  in Texas, and so much more. Seeing as how you definitely don’t want to start working yet, let’s talk about it. If you missed the action, here’s what happened

We’ll be talking all about these goddamn Celtics in their normal blog that comes out a little later, so let’s take this time to focus on MIA and some absolute bullshit by Dwyane Wade

This was pretty annoying to watch. 50 year old DWade torched the Celtics last night, hit multiple threes, and basically right when they were making their huge 16-0 run to get back into it, he had 5 huge points to end the third quarter that sort of took the wind out of BOS’s sails. Wade had made just 3 3PM over his last 7 games so naturally he would go 3-5 in this one, and frankly it’s time he retires already so he stops torturing the Celtics. Enough already.

But it wasn’t just him. Justise Winslow was just as impactful with his 13/7/11

and the story really was the difference in bench production. MIA won that battle 60-23 which is insane and this is now the third win in a row the Heat have over the Celtics. Huge win for them as they try and get closer to .500 at home and hold onto that 6 spot out East, and you can’t convince me their Miami Vice uniforms didn’t play a role in this. Those things are fire. I mean this is a Heat team that averages 11 threes a night and ended last night with 18 3PM, so you combine their solid bench production with that number and that’s how you get a blowout.

It’s already hard enough to beat the Nuggets no matter where you play them. It’s even harder when that game takes place in then Pepsi Center where they are now 17-3. It’s even harder than that for an opposing team when just four players show up. That was the case for the Clippers, who had just 4 playtes in double figures, shot 43/25% and scored just 46 second half points. That ain’t gonna cut it I’m sorry to say. Not again this caliber of team like the Nuggets

Not exactly the best return to his old stopping grounds for Gallo, but the good news is this team is only 1 game out of the 3 seed so it’s not exactly like losing to the best team in the Conference hurt them all that much.

For DEN, they came out firing with 37 points in the first quarter and never really looked back. They had a much better time shooting the basketball finishing the game with 50% shooting and then just 9 TOs. With 6 players in double figures things were balanced, and obviously they were led by Jokic doing Jokic things and snagging a triple double

which is starting to become a regular thing, then Jamal Murray had a team high 23/6/3 on 10-16 shooting

and that was pretty important considering that Gary Harris didn’t play. The DEN backcourt needed to step up and him and Beasley combined for 38 points which certainly did the trick

You then add in some 17 points by a Plumlee

and that’s how you secure your 11th straight home win. The Nuggets now have a 1.5 lead over GS at the halfway point which certainly nobody thought was going to be the case entering the season, and the fact that DEN has been this good, for this long, despite all their injuries just solidifies to me how real they may be this season. It’s not as if the Clipper are a joke and they just gave them the business.

If you don’t want to call this the game of the year, it’s at least in the top 3. What an awesome like 3+ hours of basketball this ended up being. On one side you have OKC, the third seed in the West and a team that is trying to fight their current slide. They got big time nights from their two best players

honestly this may have been one of the best all around games of Westbrook’s career, not just because of his line but because of his decision making. He trusted his teammates and made the right play time and time again in high pressure situations, so if I’m a Thunder fan bummed out about this loss, at least there’s that. Plus George totally got screwed at the end and that’s just a damn fact.

Also chipping in was Terrance Ferguson with some huge makes late

and then another career night from Jerami Grant

This ending may have been one of the more exciting stretches we’ve seen all season, so let’s relive it real quick

I need a cigarette,

For SA, I would say getting a cool 56 fucking points from LaMarcus Aldridge is pretty good

but he too was not alone. There was Derrick White, so pretty much made some of the biggest shots and plays of the night for the Spurs on multiple occasions

DeRozan had a near triple double himself with 16/8/11

and how could we not mention the fact that SA came out and made their first 14 3PM in a row. Their 84% on 19 3PA is the best shooting from three with that many attempts in NBA History which is ironic because the Spurs despise taking threes. Honestly we may not see an offensive performance like this game again, especially from SA. 7 players in double figures, 45 points from just three bench guys, and three straight quarters to start the game with at leat 33 points. It was madness.

Well, now we know how important Blake Griffin is. The Pistons were without their best player in this one and it showed. No player over 16 points, they shot just 42/28%, had 19 TOs and you do that on the road against a pretty decent team like SAC, they are going to run you out of the gym.

and the Pistons have now lost 4 in a row, are 6-13 on the road and find themselves 2 full games out of the final playoff spot in the East. They should be good, but sadly, they are not.

For SAC, they were balanced with 7 players in double figures and really Buddy Hield and Fox were pretty quiet, combining for just 30 points. For me, the real story and best part of this win for SAC was seeing Harry Giles go out and play really well

You’re an asshole if you aren’t rooting for this kid after everything he went through, and last night may have been the best performance of his career

They dropped 65 first half points and had a nice enough lead that even a late Pistons rally didn’t even mean all that much. This win brings SAC to just 2 games out of the 8th spot and that’s pretty crazy given where we are in the standings.

And that’s it! You’re now all caught up on everything that went down last night in the NBA. We’re back tonight with 9 more games but if you have plans and can’t watch that’s cool just check back in the morning and I’ll bring you up to speed on what you missed. Have a great Friday!