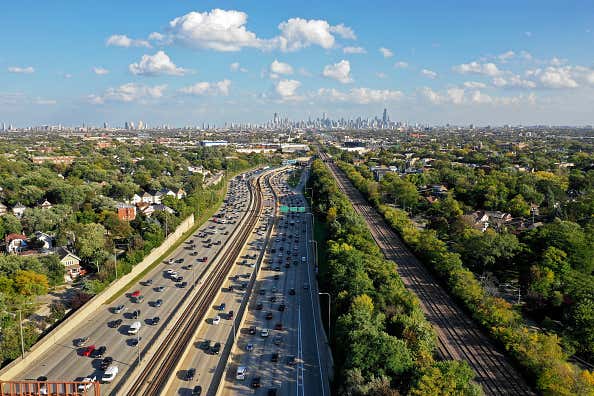 Block Club Chicago — Chicago’s drivers are spending a lot of money to get to and from work, according to a new report. On average, Chicago’s drivers will spend about $142,880 on gas and car maintenance related to commuting over a lifetime, according to a new report from Educated Driver. During that time, they’ll drive about 225,000 miles commuting back and forth — enough miles that they could’ve circled the Earth nine times.

Compared to other cities, Chicago’s drivers have a more expensive and lengthy commute: The average American driver will pay $108,727 and drive 173,203 miles over a lifetime of commuting, according to the report, which analyzed commuting in nearly 100 major cities. But Chicago’s far from the most expensive: Atlanta’s drivers will spend the most on their commute, with the average driver doling out $175,104. After Atlanta is Houston ($174,314) and Dallas ($166,896).

Misery can best be defined as commuting to work. I don’t care what your job is, how you get there, how long it takes, etc. Commuting fucking blows and there’s no getting around it. Even if it’s a good commute. It blows. They all blow. There’s no such thing as a good commute.

That said, there’s a special kind of suck to commuting in Chicago. I’ve played on both teams in my career – commuting both in and out of the city. I’ve taken Metras and brown lines and blue, red, green and orange lines. I’ve taken buses. I’ve parked in garages in the loop. I consistently reversed on the Edens from Lakeview to Deerfield for 6 months in 2012. I’ve made a living on Dan Ryan to 57 to 80 to 355 to 88 to 290 on repeat. We call that the mid-market insurance salesman Suburban loop in Chicago, and it fucking blows. All 78 miles of it. And it blows pretty much any time of the day, every day of the year. One year I got to walk from West Town (Grand/Halsted/Milwaukee) area to 500 W. Monroe which is like a solid mile through some really cool parts of the city to a Mail Time job. And even that sucked a relentless amount of dick because, you guessed it, I was commuting to work.

Glad I got that off my chest because I’m teeing up what I think should be the official power rankings of the worst highways in and around Chicago. I understand that we’re about to drive 225,000  miles throughout our corporate america lives, and I get that I’m forking over a good chunk of money in the process. Honestly no one needed to specifically tell me $142,000. Like you could have just said it was a lot and that would have been fine. But now that you want to get specific and make me feel like a bag of dicks, I’m getting specific and taking some of the Chicago highways to task. Fuck these godforsaken failing pieces of mid 20th century infrastructure. Fuck you concrete. And fuck you 290 for taking up the better part of my adulthood being ripped upside down every which way causing literally traffic jams back to O’Hare and Midway and Kanakakee if you look hard enough. I’m mad.

So without further ado, here are the official power rankings from easiest to worst. I have used my own subjective analytical modeling which is basically a fancy way of me saying, these are the ones I’ve gotten the most pissed off while traveling on. I’ve got the better part of 120,000 miles of good hard road under my sales feet around this clusterfuck. I’m not an expert by any stretch of the imagination but I’ve been paying attention enough to know the following:

10. Dan Ryan  (including Skyway): The Wild Wild West of United States interstate. There is no speed limit and only one rule: get the fuck out of other people’s way. The Ryan is flanked by some of the most dangerous neighborhoods in America and god help anyone dumb enough to take Google Map’s suggestion to get off at 47th and cut through some quant side streets. No thanks. This is an all gas no brakes stretch of highway and you better respect it. Bonus points = it is IMPOSSIBLE to get a speeding ticket on the Dan Ryan. Pure lawlessness. Same time it would be nice if the skyway didn’t close that McD’s because every good trip to the Horseshoe Casino involved at least one (most likely two) stops on the dollar menu. That was a special place.

9. 355 Veterans’ Memorial: Chicago’s version of the autobahn. This beauty lines up all the far western suburbs from the South (Joliet area) to the North (Schaumburg). Originally opened in 1989, this interstate is dedicated exclusively to people commuting from one miserable place to another. It’s the Toyota Camry highway and it’s immune to traffic jams. Come here to haul ass and don’t look back. Only problem is your destination is always worse than where you left on 355 no matter where you’re headed.

8. 57: No nickname. No bullshit. You’re here to go to college, head home for the holidays, make a drug pick up in Harvey or play golf in the far southwest suburbs. 57 loses points for potholes but makes up with the natural pace and tempo one can only come to expect from Chicago’s far southwest side. Notably, it’s against local law to use your turn signal to indicate a lane change on 57 because while you’re reaching for your blinker, two minivans and a pickup truck just passed you at 90mph. Keep your head on a swivel and always remember there’s at least one IL state trooper between Halsted and 147th ONE HUNDRED OUT OF ONE HUNDRED TIMES.

7. 88: If you’re on 88 you’re going West and that means you’re rich or someone you know is rich. So that’s nice because being rich is fucking awesome. Not that I know as I’m writing interstate power rankings on a recovering smut blog but you get what I’m saying. 88 fuckin FLIES but it loses points for being the roadway to Naperville and all it’s surrounding municipalities. The tolls are crazy expensive because someone has to pay for all the shit out there and, unlike 57, EVERYONE is using their turn signal. It’s a bunch of suburban smoke bomb moms driving $50k SUV’s with no kids in the back. Bonus points for having the OakBrook mall on-deck right when you get on 88. But minus points for being a middleman interstate with no real character. Lots of state troopers. Lots of bad drivers. But some really fucking nice parts of Chicago along the way.

6. 294: If you’re on 294 you are miserable no other way to put it. Only exception is when you’re going to 6 flags and someone just got their license in your group of High School friends so you’re cooking up to Gurnee at 115mph in someone’s dad’s Nissan Altima. There’s a toll every 6 miles and approximately 50,000 commercial trucks that WhiteSoxDave used to book freight for getting in the way of literally every single move you have to make on 294. It’s basically there to connect the Western and Northern suburbs with the 80 and 57, definitely not the other way around. Somewhere, sometime, I can vision a bunch of millionaires from those suburbs privately funding 294 so that they don’t have to stomach the debauchery that is 90/94 to the Dan Ryan. This was built to avoid all that shit. And in the process they created an interstate that serves no other purpose but to connect a bunch of mid-market Chicago suburban employers with its miserable suburban workforce. Its dreary, depressing and again LOADED with fucking semis.

5. 55 Stevenson: We’re getting into some of the bad ones now. The ones that make you cringe because you know that no matter what, you are about to get taken to the woodshed the second you get on these. The Stevenson is no exception. Everytime you get on going south from the city, you think you’re smooth sailing first 3 miles. Happens to everyone because newsflash the only exits are for industrial businesses and no one uses them. So, what you have is everyone rushing into what is the greatest sea of red lights you will ever see. 4 sweeping lanes with several merge lanes flanking bumper to bumper traffic. That and I feel like it’s always dark out when I’m on 55. Could be 1pm in mid-June. It’s pitch black on 55. Another thing is that 1 out of every 2 cars is a nice four dour sedan heading out to Hinsdale for an early day home from work. I hate these assholes. I hate 55.

4. 80: I don’t want to beat a dead horse here but if you’re commuting, and you’re on 80, your life blows. I was there for a long time. It sucked. 80 is in the middle of nowhere. It’s the casual divider between Chicagoland and the rest of the state. The traffic moves quick in extremely limited pockets. Everything else is FUCKED because you guessed it – Trucks. Every single truck hitting the Tri-State area is going through 80 and whether you like it or not you’re behind every single one of them. Bonus points for my Iowa guys that recognize 80 is the interstate you take to paradise aka Iowa City. But minus points that this is about commuting and you seriously need to get therapy to work through the depression that comes with commuting on 80.

3. 94 Edens - No. I don’t want to go to Deerfield. I don’t want to go to Lake Forest. I don’t want to be cramped into 2 lanes of elbow to elbow North Shore drivers. I want to stay right here in Chicago. Commuting on 94 is basically sacrificing 3 hours of your life every single day, every single week, regardless of where you work or what you do. Just pencil in 90 minutes in and 90 minutes out. The only redeeming part of 94 is nothing because it sucks. The combination of 90/94 as one cohesive interstate before it makes the O’Hare split gives 94 zero chance to survive on its own. Anyone commuting on this piece of highway regularly is entitled to general substance abuse without social consequence. You earned it.

2. 90 Kennedy: 3 lanes for the most populated part of the state. Mind blowing shit. Worst part is sitting in traffic watching the Blue Line race by you while you’re doing the mental math to figure out how much faster those blue line passengers will get to their destination than you. Northsiders see it as a point of pride – the view is pretty damn nice coming in, they say. But it comes with a cost. The traffic boils down to people not knowing how to exit in the Loop, and that makes its way all the way back to Rodgers Park. It’s not the people on 90 as much as it is the basic layout. How anyone thought we could be smart enough to navigate the exits on the Kennedy will always be beyond me. We were set up to fail with 90 and thanks to decades of poor infrastructure decisions it appears that tune isn’t changing anytime soon. For the commuters, take the blue line or the metra. You’re a savage if you hit 90 in/out every single day. Get your head check.

1. 290 Eisenhower – active shootings? Check. A decade worth of construction? Yep. How about one merge lane from the south? How about every inbound ramp after Sacramento being closed? How about the hillside strangler aka when THREE major expressways (294, 88, 290) all merge into one gigantic cluster fuck tollway. Overall 290 is the single worst commuting experience known to mankind. It’s extremely dangerous and save for about 3 hours in an entire day, the thing is completely fucked start to finish. There is literally construction everywhere. Blue line, exit ramps, merge lanes, express lanes. God help anyone who has to rely 290 in any regular capacity. It has no identity, no soul and will do nothing but crush your spirits. Don’t take the job that requires you to use this as your regular route to work and in return you can thank me for not hating your life.

That’s it for the rankings. Tell me why I’m right or wrong.