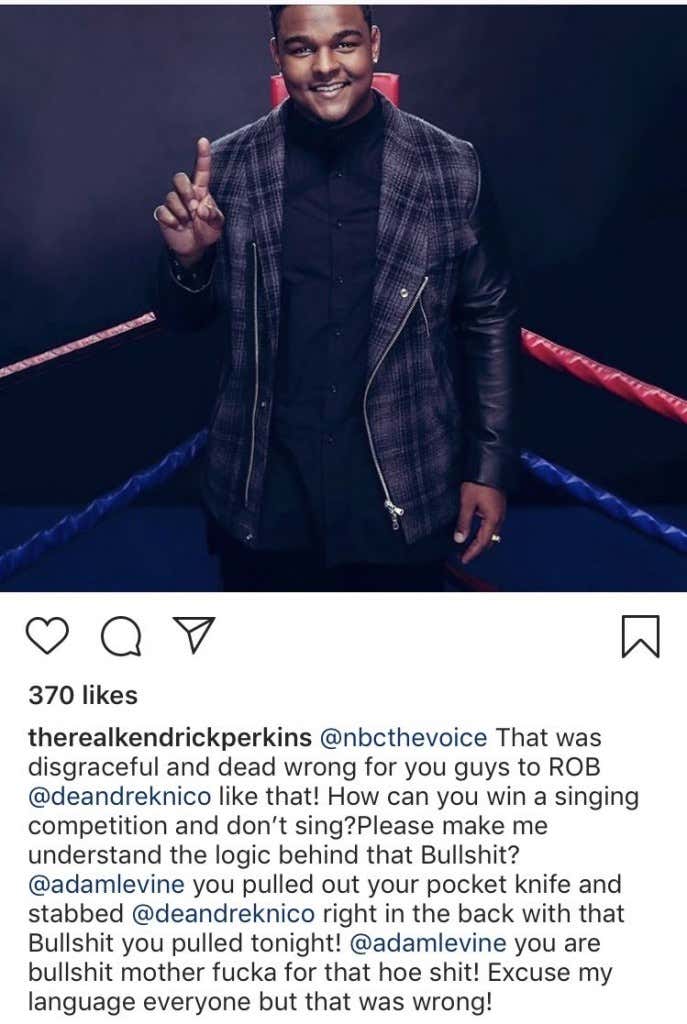 “@nbcvoice That was disgraceful and dead wrong of you guys to ROB @deandreknico like that! How can you win a singing competition and don’t sing? Please make me understand the logic behind that bullshit? @adamlevine you pulled out your pocket knife and stabbed @deandreknico right in the back with that bullshit you pulled tonight! @adamlevine you are a bullshit mother fucka for that hoe shit! Excuse my language everyone but that was wrong!”

I don’t know the nice way to put this, but let’s just pray Adam Levine has a cavalry of security guards around him day and night moving forward. Because that’s what he’s going to need after greatly offending Kendrick Perkins. This man was just trying to support his favorite singer on this season of “The Voice” but couldn’t after Adam Levine pulled some hoe shit and stabbed Deandre in the back in favor of some talentless hack. Way to go, Adam. Hope it was worth it, bub. Cause your days are numbered out here, pal. Thought you were performing in the Super Bowl did ya? Well think again, boy-o. Cause Big Daddy Perk is here to do two things: commit hard fouls while acting as if he did not commit a foul at all AND beat up pop stars for ruining his reality television show viewing. And buddy he’s all out of fouls to give.

There are like five people in the history of the world I absolutely wouldn’t want using the phrase “pocket knife” whilst threatening me and Perk is for sure at the top of that list. I’m sure Levine thought he was just doing his job – cashing an easy check as a judge of a popular singing competition on network television. Little did he know it would become his ultimate demise. One false step in this world and it could be your last. Maroon Boy here had to learn this lesson the hard way. A real shame.